I keep trying to write you guys an interesting post and it keeps coming out like Harry Potter in Book Five--all negative and angsty and full of misplaced anger.

Luckily without the Voldemort.

And you know what? I'm just tired. That's all. I'll feel better Sunday morning after I've had a bit of rest; and then everything else will feel better too.

Someone said, "If at first you don't succeed, try, try again.

No use being a damn fool about it."

This is Vesuvius, throwing in the towel.

I love you, and I hope you have a mosquito-free weekend.
Posted by Vesuvius At Home at 12:33 PM 3 comments: 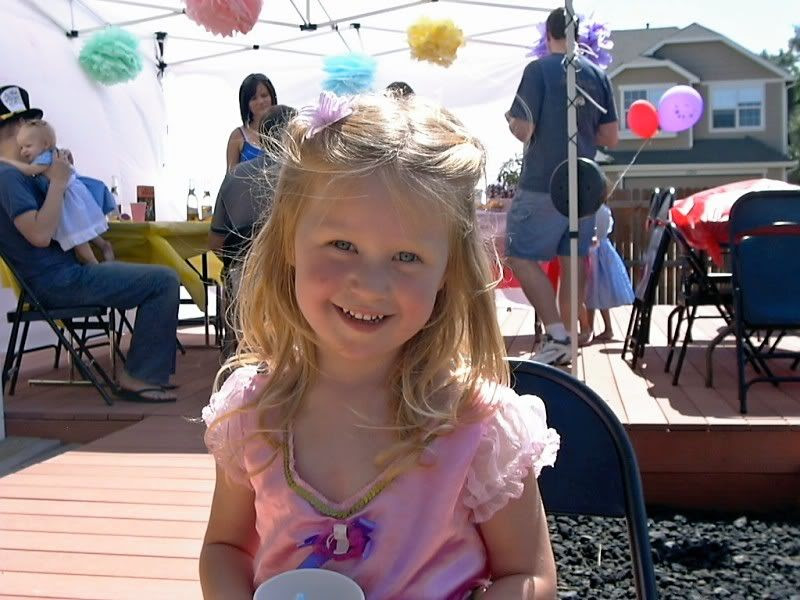 "I played with a little boy. Him's name is Jack. And him's my boyfriend."

"Well I'm sure soon he'll get a job and be able to move out on his own."

"Yep. And then him's name with be Gerald."

"Yeah. Him's my boyfriend. But him doesn't matter."

Indy, I gotta say. I dig your attitude. 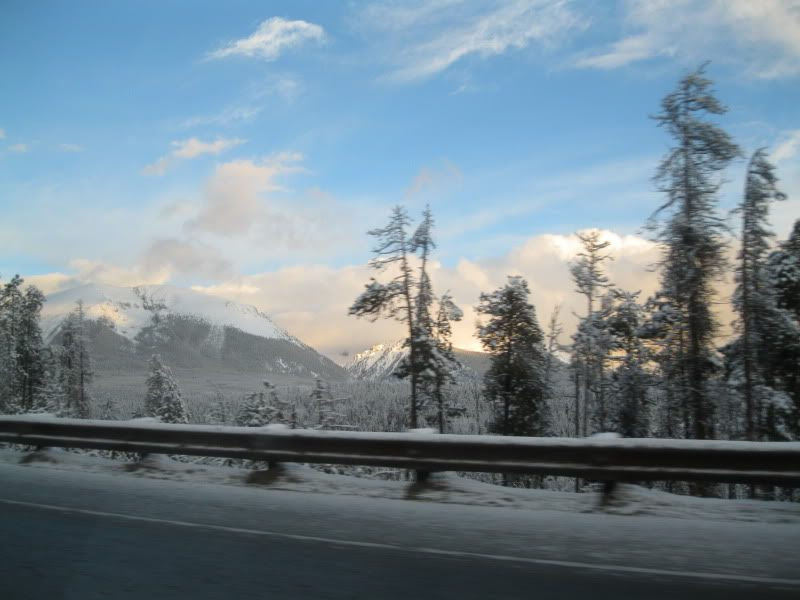 It is true that we drove 17 hours to Huntington Beach, California in one day, stayed there for one day, turned around and drove 15.5 hours (curious) home.

It is also true that every single hour in the car--hours with my parents, going on four hours sleep, legs and thighs cramping up, tummy growing most unhappy--every single one was worth it a billion times over.

We wound through the snowy mountains at 5 in the morning, and my dad couldn't let up about all the FedEx trucks.

But all we saw was FedEx.

"There's another one! What are they DOING here? Look, another! It's five in the morning. What is with all these FedEx trucks? What are these bozos doing?" and I think at one point he even accused FedEx of trying to take over the world.

He went on and on. FedEx was in Avon, Vail, Glenwood Canyon, Parachute. "Where are they all coming from?" my dad said, like FedEx was some kind of alien enemy adept at hiding behind trees. Finally my mom threw up her arms and cried:

"Brad, what is the matter with you? They are delivery trucks. It's their job to be out on the road. It's their purpose. Are you going crazy??"

And my dad quietly said, "There's just so many of them". And we'd been in the car for five hours and Noah and I laughed until we cried.

We hadn't eaten breakfast and we wanted to stop for lunch and my mom was all disbelief and said, "How many times a day do you people EAT?"

And I told my parents I wanted to find a rest stop and they started the Rest Stop Chorus. It goes like this: "You have to find a sign that says rest stop. Usually they're marked with a sign. There will be a sign before the rest stop. The sign will say 'rest stop'. There should be a sign. You should look for the rest stop sign. It is the one with the words 'rest' and 'stop'--" 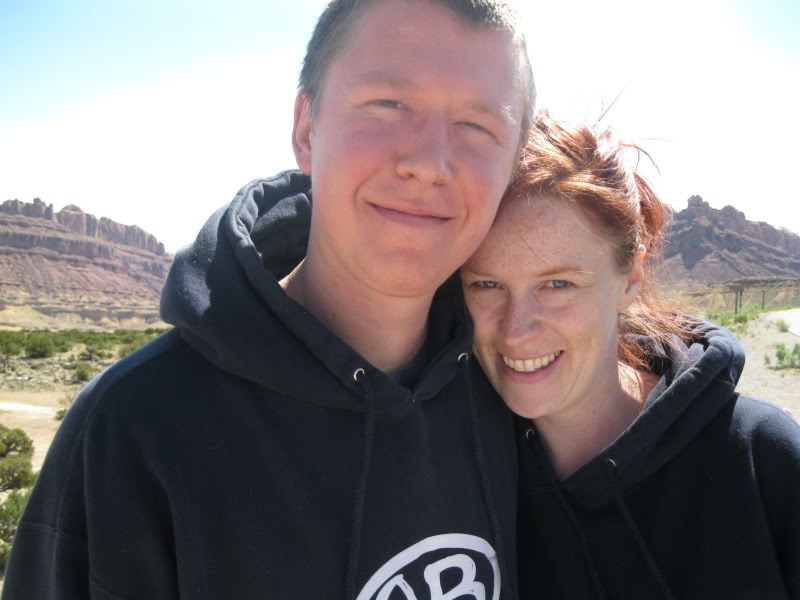 You want my parents at your wedding because they dance with wild abandon. Usually my parents are the only ones at the wedding dancing a storm. They are actors in their blood, see? And they don't mind--really, they don't--being the center of attention. 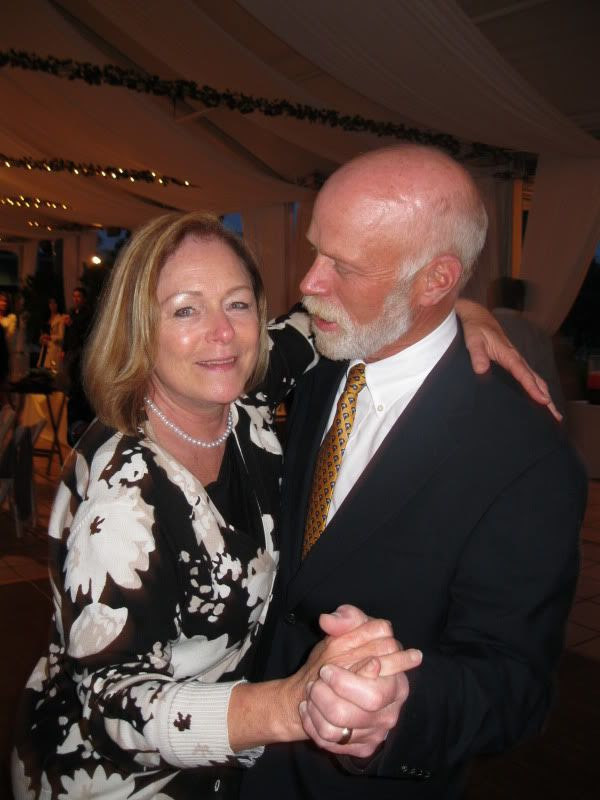 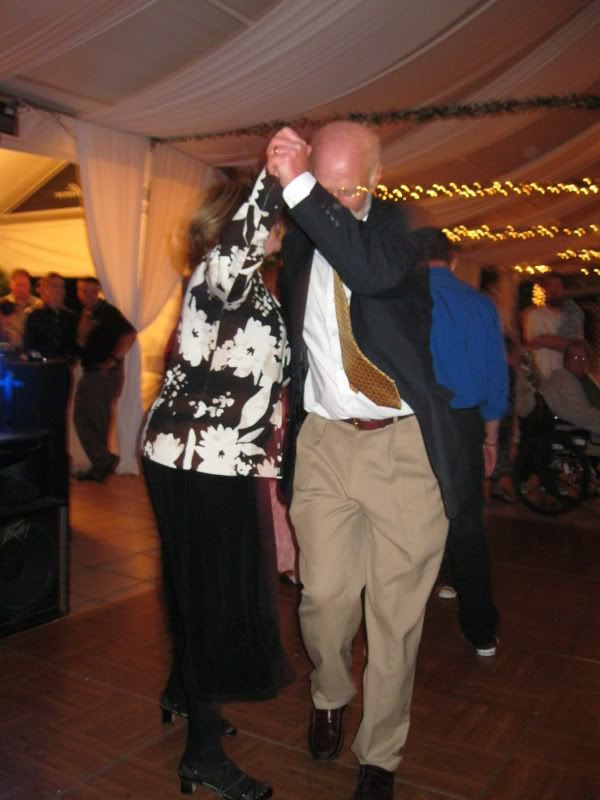 But this wedding was different. Because theatre blood runs on both sides of the family. So, whereas usually meine Mutter und mein Vater are the only ones shimmy shaking with their arms in the air and their elbows pointed skyward, boogeying down without a care as to how they look or who's watching--actually kind of enjoying being the center of the frenzy--this time there were lots of show people out on the floor. I don't know if I've ever seen such dancing. Conga lines, twirling circles, the two rows with everyone getting their groove on down the middle. It was like being at a wedding with all the kids from Glee. Except they all got kinda toasted and forgot the choreography.

I am not kidding. I was first in line for the--I thought they were calling it the honey dance, but it turns out they were calling it the MONEY dance. Which makes a lot more sense, looking back. And I was supposed to offer money to dance with the groom. Ha! Not I. I conned his best man into letting me dance with him for free, and then, when it was my Almost-Cousin-Big-Sarah's time to cut in--I tell you the truth--I pulled that poor groom's neck to my lips and kissed him. Kissed him! But I was not drunk on liquor, nay. I had only had one beer.

I was drunk on joy.

It was all so happy, and so poignant, that I find myself unable to talk about it here. 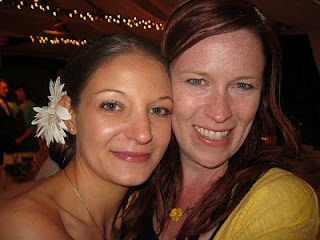 Everything fell apart, and we couldn't go.

And then everything came together. And we did.

I saw my cousin get married. And it was beautiful. And I was drunk on joy and accidentally flirted with the bartender and kissed that poor groom. (Sorry Corey. Sorry Sarah.) I got to see my Sort Of Uncle Eric, who I had such a crush on when I was ten that I could not speak in his presence. And there was a while there when I could have done the ugly cry.

Because it was just so unspeakably beautiful. 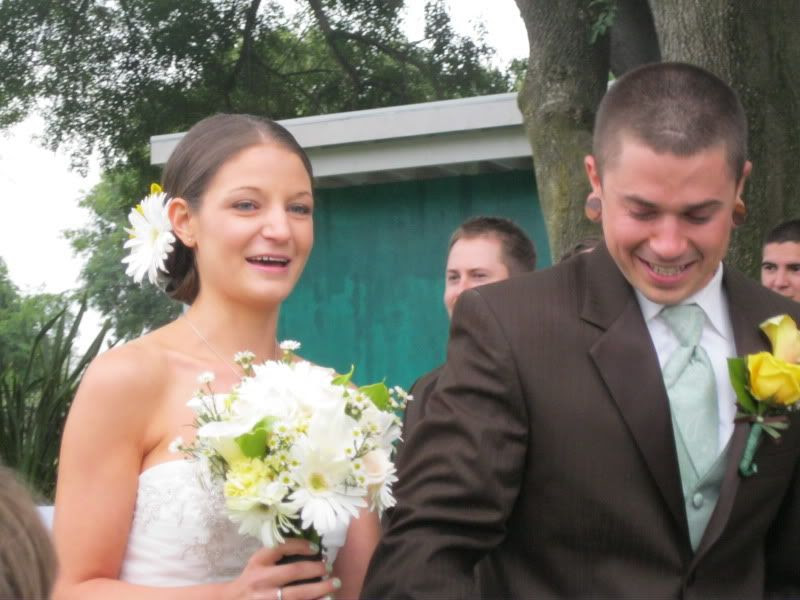 Labels: family first, on the road

I tell myself we are living like bohemians which isn't true, but it helps. See, it's ok for bohemians to do things like spend their last fifteen francs on a box of red wine. However, this behavior is inexcusable in parents. So you see what I mean.

The real bohemians are Mermee and Trey Bien, and I mean to write about them but not today.

I keep trying to write you a lovely blog and nothing comes out right.

I think it must be because I am stressed as heck with job interviews--especially with people calling me in to interview for positions that may or may not actually exist ("Well Ms. Tuttle, we don't know if we're going to have fairies--I mean, we don't know that we aren't going to have fairies, do we--and so, saying we did actually have fairies: would you make a good one?")--and trying to find a house, worried about living on a smaller income, finding a school that will still take Indy (ha! That's a joke).

This stress had lead me to do such things as, well--spend my last fifteen francs on red wine, buy three fancy bars of chocolate, write snarky emails to strangers, laugh helplessly by myself in public, buy Pop Tarts, let papers with sensitive information (such as Mr. V's social security number) fly clear out the window, and watch Bones.

I don't know if you watch Bones but my crush on Mr Special Agent Booth came and went like Rocktober. All was well until this: we learned Booth looks down on organic food, judges even vaguely kinky sex, and thinks only skinny gals should love their own bodies. Seriously? This show is written for women. I am fairly sure there are only three men watching this show. This is who you give me for a romantic male lead? Mr "lose ten pounds get your pansy ass out of the farmers market and don't look at me in the eye"? Who writes this show, Stephanie Meyer? Try harder next time.

Then you read the actor cheated on his wife and even that little bit of you that remains sickly attracted to Booth flies away like sensitive information on windy days.

I'm breaking out. In one day I fed the girls both McDonalds and Chipotle. Along with the Pop Tarts I bought Kraft Macaroni and Cheese. If these aren't signs of mass systematic failure, I don't know what is. All systems overload! Vesuvius forgoes bananas for fruit loops, are we sure she has not been assassinated and replaced by Vesuvius from the Alternate Universe? The library called to inform me I would be sent to collections for an item that I lost and I blew my top.

I also got the fines removed and the fees waived. And no collections for me. Library Fascists.

Things like this are my lifelines: At Target there is a row of motion sensitive baby dolls. Every time we walk past them, they start to shake their heads about and wiggle their limbs and make creepy fake cooing noises.

And every time, Indy looks at them mistrustfully and tells me, "Those babies gonna kill me".

She's not scared or anything. Just acknowledging her own fate.

Now if only I could know mine.

Thank goodness I have a husband who makes me Cuban pork sandwiches and margaritas for mothers day.

And who allows me to select myself this little treasure.

Now we must collect them all. Mustn't we?
Posted by Vesuvius At Home at 10:48 AM 1 comment: 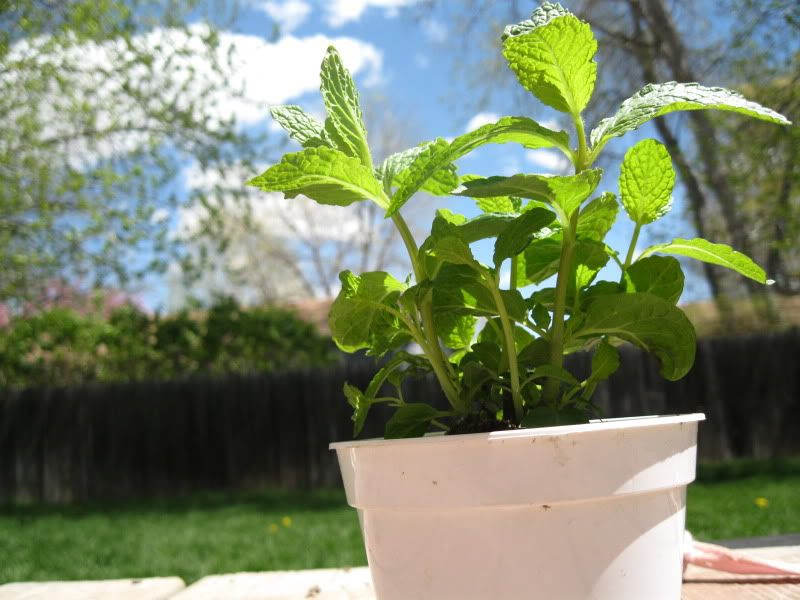 I bought a little plant of mint
And named her Hemingway.
I carried her about my house,
She made us light and gay.
Plants and I have disagreed,
But do not be dismayed.
For surely I can thrive that plant
Which brings mojito day.

This is Hemingway and I love her so much I wrote her a poem.

Every morning the girls and I put her in the sun and give her water. I tell the girls to say nice things to her, and Ayla does, when she thinks no one's listening.

I have never ever managed to not kill a plant or a flower. I even killed those bamboo things that apparently need no care at all. But Hemingway and I are going to make it. And one day soon, I am going to put her above my kitchen sink.

In my kitchen. The one that is not anyone else's but mine.

Ayla took these photos which struck me as beautiful and tender: 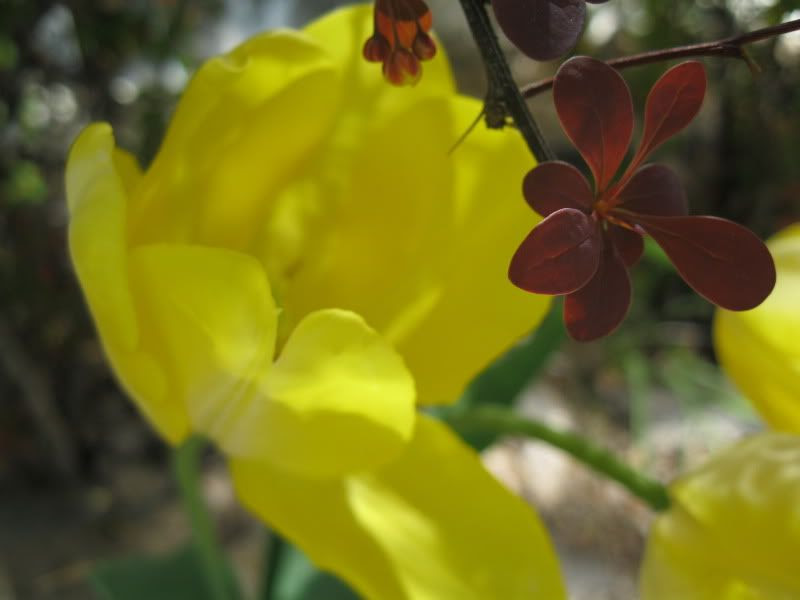 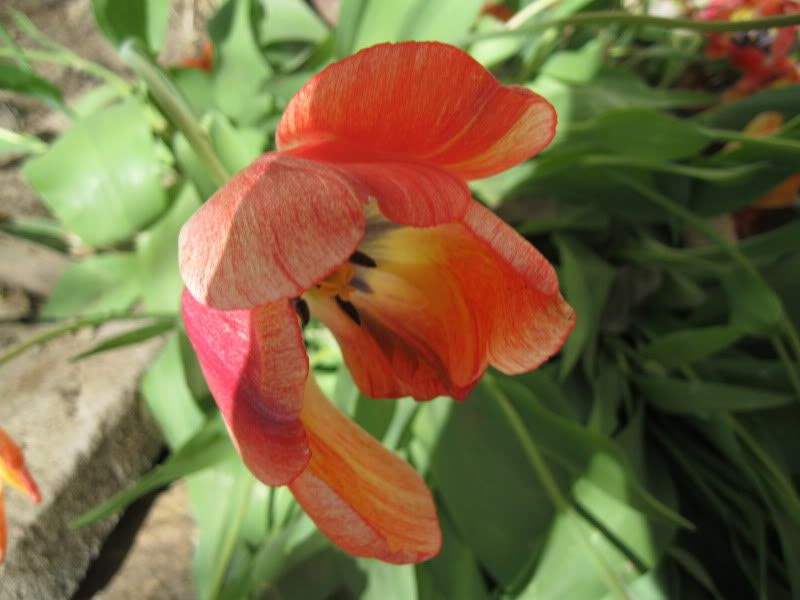 And Indy and I snapped each other: 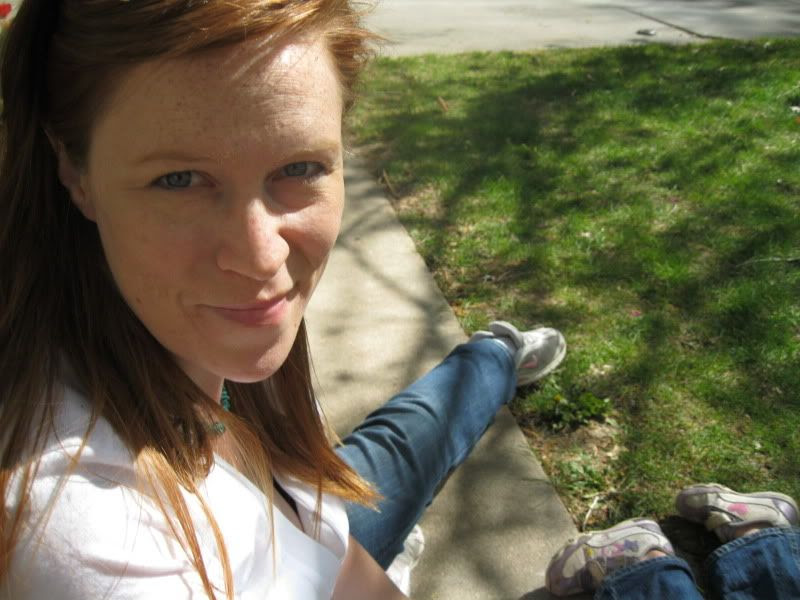 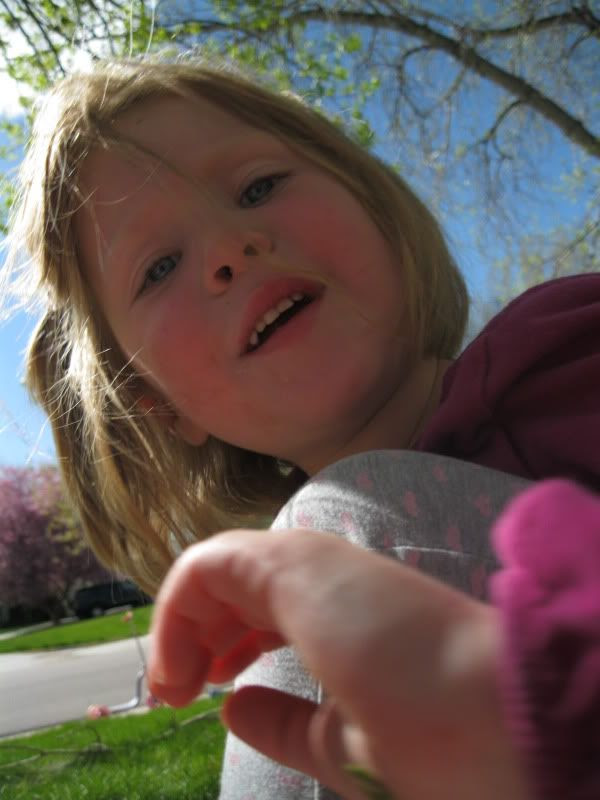 I promise not to commit floracide over the weekend.

The crane at the park

The sweet smell in the air

Beautiful harvests of green and fragrant and nourishing things

Blue skies with the white clouds

The world all lit up green beneath the evening sun

Cafe Rio and goat cheese and avocados and wheat beer

The iced mochas and the time to write; the sun on my skin, those dark gray clouds and the sunset lighting up the trees all golden against them

Margaritas on the Cinco

More of my daughters reenacting Ophelia's watery death in the backyard

Kill my Mojito Mint plant. I named it Hemingway.

I will remember to celebrate May Day by leaving blossoms on doorsteps. But this was not that year.

I love you May. I have high hopes for you. Don't let me down.

(those were the manipulation skills I've learned from being a mom).

Vesuvius
Posted by Vesuvius At Home at 1:49 PM 1 comment: