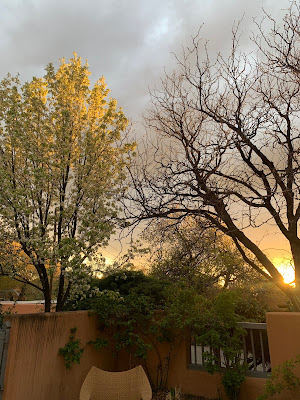 Today I watched a little girl just splash into the Santa Fe River in her pink striped Adidas tennis shoes, same shoes as I had in college. It felt like a miracle. Not the coincidence of the shoes, but the unrestrained exuberance of the girl, to splash full-on into cold moving April water without a single care for the virus or the shoes. I watched the water wash over her ankles and gulp into her shoes and I could feel it as if it was happening to me, as if I was the girl, unrestrained and wild and one with the rivers and the mud. She was with her father, who held on leashes the family dogs, and he didn’t say anything, not one word about the shoes, he seemed truly not to care. A small miracle. They raced sticks down the water, and I cried, remembering when my girls were young and their father and I together watched them splash in the rivers of Appalachia, a lifetime away. I walked home under pink boughs that smell watery and just like Paris, the way Paris smells for me, aside from the urine and the car exhaust, having always gone in the spring. In an optimistic moment a few weeks ago I bought a plane ticket for October. The ticket was cheap. On that day The world was different from what it had been and different from what it is now. When I got home the girls were talking to their friends on their computers. I sat in the back yard and watched the sky go rosy and the atmosphere go gold, like it used to in Brevard, in North Carolina, when the mists would rise over the green and the whole earth would rest, so soft, sighing in and out her breath and the flowers exploded from every corner like a Dionysian riot. This astonishing world. As I type this the church bells are ringing. The bird song is sweeter. How strange that the air should smell just as it did for all my previous springs on earth when this one is so different. The birds do as they’ve always done. So do the flowers. Children splash through cold streams. The colors leave and return in the sky.
Posted by Vesuvius At Home at 10:02 PM 4 comments: 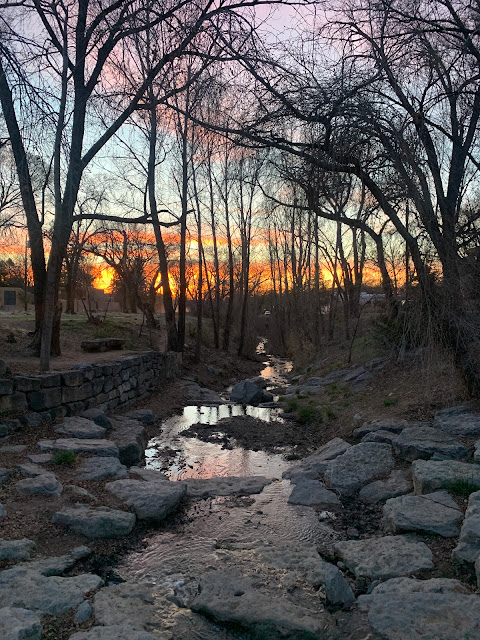 I was ironing tablecloths.

We were going to have the table read there at the production office. You know, the thing where the cast sits around a table and does a read-through of the script. Creative name: table read. I was hoping I'd get to attend. I've never attended a table read before. We'd spent a lot of the previous day making little place cards with each character's name on them using an Avery template. It was more complicated than you might think, but we'd finally gotten it right. Now, it was Thursday morning and I was ironing table cloths. There was going to be a table read.

My new friend came in. A publicist with an impressive amount of experience. She said she'd be shocked if they didn't pause production by that afternoon. If anyone is going to know these things, it's a publicist, I figured. She said other shows all over the world were starting to shut down, and it would be a bad look for ours to keep going. But nothing was certain yet. I texted my friend on a show in Winnipeg and she said their production was still going strong. As far as I knew, we were still going to have a table read. So I kept ironing the table cloths.

About an hour later all the producer's meetings for the rest of the day were cancelled. Network representatives were flying in from LA.

By noon there was no longer any need for the table cloths.

Late that afternoon we all gathered in the room where we were supposed to have the table read. The table cloths I'd spent two hours ironing were folded up in a corner. The network said we were delaying principal photography for two weeks. A pause, they said. A two week push. We'd have two extra weeks of prep now before we started shooting. People that could work from home should. Those coming into the office should practice social distancing. No more shaking hands. Use gloves at the crafty station. Hand sanitizer everywhere.

Some departments were relieved for the extra time, they'd been scrambling to be ready for Monday.

Anyone who wasn't from New Mexico and wanted to go home should, they said.

I went home that night to a hotel. I was considering signing a lease on an apartment. Or trying to, anyway, on a unit I'd sent pictures of to the girls for their approval, which they gave. RENT IT, they said. They were eager to move. But the owners didn't seem to want me. They didn't think my work was steady enough.

Friday morning I went in to work. Most of us did. Prepared to go through the logistics of delaying production on a film for two weeks. All of the locations would have to be adjusted, all the equipment stored, all the vendors contracts adjusted--so many logistics, more than I even know.

They're going to shut us down, said my new friend, the publicist. Completely. There's no way they can't.

And she was right. By about 11 am they told us.

Close it up. Send everyone home.

There was talk of private jets but most of the cast ended up staying in Santa Fe. One of the actors, however, went back to LA and production was paying for his home anyway, so that's where we are now. Me and the girls. An Airbnb near downtown Santa Fe that is fancy but maybe not as fancy as you'd think. It has a lot of animal print. Zebra rugs and giraffe chairs. It has scary masks and one gorgeous wooden bowl that is laced with turquoise the way practitioners of Japanese kintsugi pottery lace their cracked vessels with gold.

The days speed by. My two weeks paid ended and the studio said they'd pay us all for two more.

The first night after we shut down, some of us gathered for dinner at someone's home. It hadn't sunk it yet, the reality. The understanding of just how distant social distancing was supposed to be. I ate a beautiful meal with five people I had met just that week. I remember the publicist saying that we were going to be paused for more than two weeks. That we needed to prepare ourselves for the reality that this was going to be closer to two months.

Two months, I thought. A feeling like my head was swimming away from my body, zooming up into the atmosphere like a loosed balloon. Okay, I can do that. I have enough saved to last me two months. With unemployment, I won't have to cut that much into my savings. Two months from now we will reconvene and rents might even be cheaper and we'll pick up there. We'll shoot the movie in May and June and July, which only means I'll be employed for even longer. Two months will be fine.

Now, of course, we all know it could be more than two months. We have no idea of the shape of this yet. It could be something much longer.

The woman who has been my friend since high school, who is a single mother to an infant, tells me she hears on the TV that there could be a second strain of this thing in the fall.

The days speed by. I set my alarm for seven to make them feel longer but don't manage to get up til 8. I make coffee my new way, with MCT oil and mushroom powder and collagen protein. A ritual that helps all this nothing feel like something. Sometimes, in that first hour, I journal. Sometimes I can write. Sometimes I sit in silence, or put on a playlist of French music. Inevitably, I pick up my phone and spend too much time on Twitter on Instagram. I'm hungry all the time, it seems I'm never full.

The girls sleep until noon and then we make coffee together, a creamy coffee drink of South Korean origin (or Libyan, or Indian, accounts vary) called dalgona that is, I hear, now tiktok famous. That's where we discovered it, after all. Sometimes in the afternoon I sit on the patio with a book. The first two weeks especially I was able to focus, to read. More often, lately, in the afternoon I enter this spaceless, boundary-less lacuna that passes by quickly, my mind an empty drift, a barren desert scattered with tumbleweeds and feathers. Everything blows by and echoes and yet nothing sticks. I sit outside and stare up at the sky, watching the clouds. Watch the symphonies of butterflies on the white blossoms here, watch the bees. Watch the light change, and think about nothing, and relentlessly reach for my phone, and feel how it exhausts me, the phone, and put it down. And pick it up again. I spend hours this way every day. Some days I get into bed around three and get out around seven to start making dinner. Sometimes I don't make dinner.

But when I do make dinner, I play Taylor Swift or the Indigo girls, and that's when I cry.

I have my breakdowns, cooking dinner. It's fine. I'll be sautéing chicken or boiling water and all of a sudden it will hit me: some combination of the spring sunset in Santa Fe, the red light streaming through the blossoms, a lyric "And I snuck in through the garden gate every night that summer just to seal my fate", and it will suddenly crush me, the reality, the surreality of what we are facing, of how quickly and drastically the world changed. I will think of the hundreds of spring evenings that came before this one, when I cooked dinner in a sunlit kitchen and everything was everything, life was just life going on, it hits you like that and I put my hand over my mouth and slip into the laundry room that's off the kitchen here and cry. So the girls don't see me. I'm alone, there's no other adult in this house, no one to see me or catch me or make sure the broccoli doesn't burn. I just stand there for a moment and cry and feel the weight of the new world and this tremendous, all encompassing not knowing. This limitless nothing that we all live with now every day because the old has been destroyed and the new cannot yet be built again.

Then I stop crying and go back out and shift the chicken in the pan and take the vegetables off the flame and we eat dinner.

Maybe I go for a walk.

Maybe I sit by the river.

One night there was a man there too. Sitting on a stone bench, playing Spanish guitar on the banks. I could hear it faintly over the sound of the stream. I stayed for awhile, just to listen. I didn't look at him and he didn't look at me. Just two strangers by the water, taking comfort in the dusk.