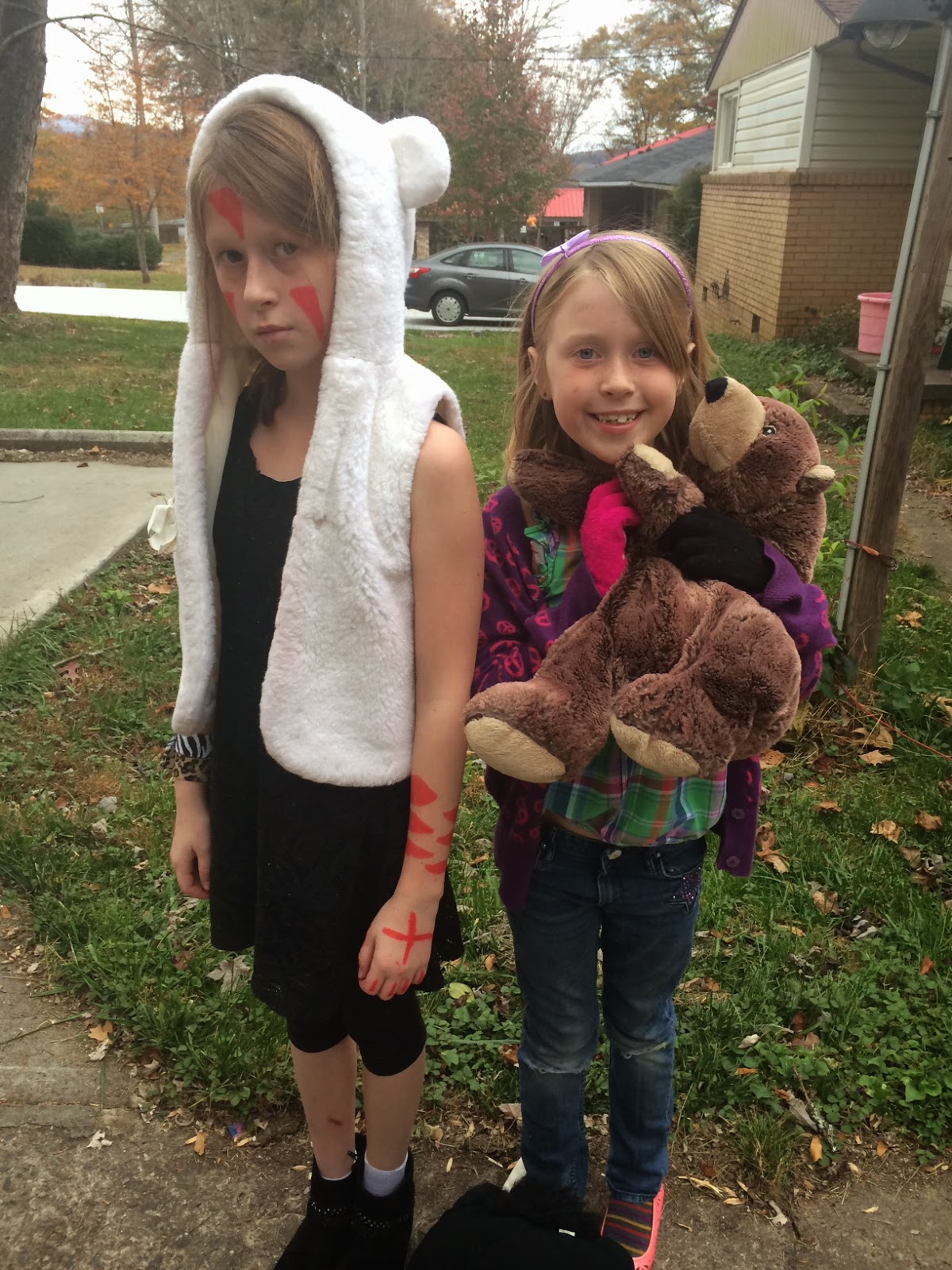 Ayla as Princess Mononoke and Indy as Junie B. Jones

Indy has been dreaming that our cat, Whiskey, is turning into a man at night, and that while she sleeps he takes her earrings out of her ears and puts them back in. I am not even going to BEGIN to touch the Freudian implications of that one. At dinner Ayla said that charming anthem of 4th graders everywhere: "whoever smelt it dealt it", to which Indy smartly replied, "Whoever made the rhyme is a bank robber", having mistranslated the usual reply in that swirling, nautilustic brain of hers. I know what you're thinking, but Indy is not a drunk.

While at work yesterday I realized that Thanksgiving is about to happen. I'm feeling melancholy about the holidays this year. Plans to go to Colorado for Christmas (the sound of that so cozy in a 90's sitcom way) fell through, which means we are alone here in Brevard for both of the major winter holidays. As if the holidays weren't already drenched in nostalgia and melancholy enough. I am one of those people who feels sad upon hearing Christmas music chirping in stores or seeing items that aren't normally attached to Christmas dressed up in green and red and carefully arranged in eye-catching displays. A few weeks ago at Barnes and Noble, the sight of Christmas-y tea and shortbread boxes made my heart sink. Not because it was "too soon" or disturbingly capitalistic, I'm long resigned to all that. I don't know exactly why the holidays make me feel low, they just do, and I'm feeling all the lower about spending them here rather than there.

Growing up, my mother always worked frantically to create a beautiful Thanksgiving, and as a teenager I began to implore her to call off all the work, to order Chinese food so that we could just relax together. (It was also as teenagers, I believe, that my sister and I began to call it Thanksliving, not as a paean to 'taking Thanksgiving more into our hearts' but in order to do impressions of drunks) Now as an adult, I'm perfectly happy to order take-out, but of course my daughters want the full traditional spread. So last night, Noah and Ayla and I stood in the kitchen and made a list (Indy was off somewhere hallucinating) and sometime this weekend I will shop for turkey and cranberries, either in the dead of night or by the first rays of dawn, like some poor translation of a pagan ritual, designed now in modernity not to appease the fitful gods but to avoid the wealthy retirees, who in Brevard are legion. I don't like Thanksliving food, any of it, except this horrendously wonderful, uh, thing, from Noah's side of the family that involves beating Velveeta with sugar, slabbing it on top of apple pie filling, and pouring condensed milk over the whole affair. It is nothing short of an abomination, which pleases me like Krampus does during this saccharine, canned-joy time. 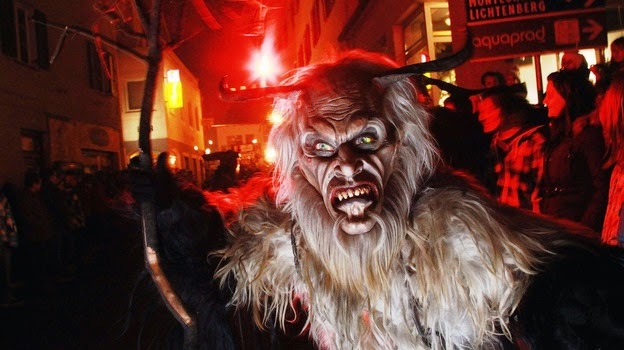 I Know What I Mean Sometimes

Three easy peasy hairstyles
that I like to keep in my aresenal
are 1) the I Am Become Life-Giver, and
2) The Real Creator of Worlds.

Last night was awful. How can a school sponsored lasagna dinner followed by a book fair possibly be awful? you are wondering. But you are wrong. They can be the worst, when your kid decides to bank on you not wanting to make a scene in front of the whole town and accuses you of stealing money from her in the middle of the school library while using a tone. I know I shouldn't take this personally, but I did. Why does my kid think I'd steal ten bucks from her? Ayla has also recently challenged me by starting the Harry Potter series with the second book. She just skipped The Sorcerer's Stone and went straight to The Chamber of Secrets. I had believed that because I'm ambivalent about world religions, nothing she could do could trouble me on a deep existential level, but boy was I wrong. "We wanted strong women. We got them," a friend says at work. Ayla was born to challenge me. But no, of course this isn't true. In one sense, Ayla was born for her own purpose. In another sense, nobody was born for any purpose at all. This is a deep philosophical question not to be posed in school cafeterias on Thursday nights. Its a choose-your-own-adventure sort of question, one you can only answer for yourself. Christians and Oprahns seem most likely to believe we were born for a reason. I have been both. I still don't know.

When I go on Facebook I feel like opening a vein and turning it into performance art, something that might take my life but would also stop just one person from going on Facebook, thus creating a butterfly effect to save our world. The true hero of our times will be the hacker who destroys The Social Network completely and forever. Have you noticed that the world is falling apart on Facebook, but it's okay if you look right outside your window? As long as you stay away from lasagna dinners? Sometimes I go online and I fight with pixels. Sometimes I am enraged by ether. If I wrote a modern fairy tale today, the hero would be that hacker and the villains would be the comments section on Buzzfeed. Why are they so angry at people for being people? Why can't they understand that every generation thought something was really bad about their time, which means that nothing has ever been so bad as we thought, after all. (Except for Facebook.) If you want to be my bae, it's okay. If you go to Starbucks wearing your Uggs, I won't be mad at you for taking pictures of the red cup. Or of yourself in a mirror. Even yourself with the red cup in a mirror. These are the times we live in. I don't want to go back to some selfie-less past, before we were all totes adorable. I want to go to the future, where, if the earth is still here, we will all be more evolved. And the men will be like, "Remember when all the girls took with their iPhones were selfies, and not the essences of our souls?" They will still be policing us, but we won't care anymore. And the women will all say "tee ay, tee ay tee ay". And the old men will be like, "Remember when women were still totes adorbs?" What I mean is that we have to leave each other alone. We have to just let each other live.
Posted by Vesuvius At Home at 1:27 PM 3 comments: