I am in an editing cocoon. Which this morning means that I put on red lipstick and cried over a mass wedding at the Grammy's, but I know you don't judge me.

I have been editing this book on and off for years, but this is the final push. So for now, I can't come around these internet parts any more.

I will be back and I hope to see you then.

Here is my new shirt: 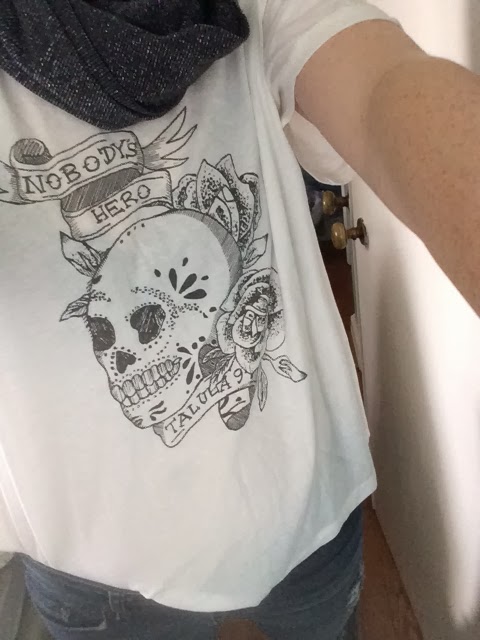 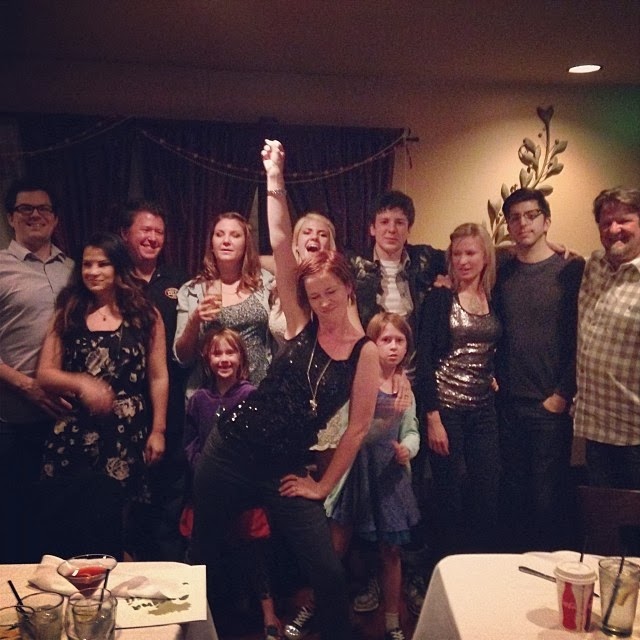 
We were in her bed, I was stroking her hair, and Indy said, "I want to go back to California and live in that hotel."  "I do too," I said. "I miss the sound of the downstairs," she said. "You miss the sound of free drinks being poured, too?" I said. I shouldn't have been surprised. The thing is, Indy has always had good taste.

The above picture was taken at my father-in-law's 60th birthday celebration, the day after Christmas. He rented out a room in an Italian restuarant and we ate ourselves silly on burracotta and ham with truffle oil and limoncello fusilli and things I don't even remember now. When the picture was taken, I was exactly 1.5 lemontinis deep. The lemontinis were a point of contention among us, because the nice South American waiter recommended I try a Cosmopolitan or an Appletini. As a feminist, I feel required to order whisky straight up anytime I walk into a bar, especially after a statement like that. It is exhausting having to defy stereotypes all the time. This is just one more advantage of being born male: you don't have to defy the patriarchy every time you order a drink. The appletini recommend really was insulting, and I told him so. Then I promptly ordered a lemon drop martini. My brother-in-law laughed at me, but I told him that by not intentionally defying stereotypes, I was META defying stereotypes.

The word among the siblings was that Their Old Dad was going to make some major announcement at the Italian restaurant. Well I am here to tell you, he didn't announce anything. He said some things about baptism that I don't really understand, having given birth to pagans, and then raffled off an ipad. (I didn't win it, so it doesn't matter). "What's the announcement?" we all said after. "Announcement? What? There's no announcement," he said. It seemed true although it's possible there was supposed to be an announcement and he forgot it. He turned 60 and is definitely senile. Probably right now he is on a plane somewhere over the west pacific getting ready to release a rap album and is like shit, I forgot to tell everyone. Anyway, the sense of letdown was palpable--we were primed for announcements--and so I think I was driven to pull the above pictured move to compensate. This picture is a pretty good idea of who I was in California. My favorite thing about it is how everyone else is so over me, except for Noah.

In Brevard, I am the mom who forgot to send her kids to school. If you think this is beneath notice, you don't live in a small town. The story of how: We got home from sunny California to New Year's Eve and a heater that wasn't working. "It's 45 degrees in the house," Noah said as I came in the door wearing my chic travel clothes and smelling of paradise. "I told you not to set it so low," I told him helpfully, and went to turn it up. Only it was set to 63, and it wouldn't turn up. At first we were optimistic that it would be fixed. Our landlord came over, 9 pm on a frigid New Years Eve, and climbed into the crawlspace below our house, a place where we have seen giant hornets and portholes to hell. Our landlord is an older gentleman and also a badass. He stayed down there some time before emerging to tell us it couldn't be fixed tonight and leaving us with a space heater. See, he mistook us for fellow badasses. Here's a space heater, quit your whining, some people live in Ohio. Noah drew me a hot bath and put the heater on in the bathroom, but the water turned tepid moments after I got in it and that is when I lost touch with my best self. I stomped and stormed a bit--after chiding Noah for doing the same thing--before climbing into bed wearing four layers and my North Face parka. So comfortable, you can imagine. We all spent the night huddled in our room, the heater was fixed in the morning, and really the only real tragedy was that in my anger I wasted a glass of prosecco.

The point to all this is that I slept until noon and spent the rest of new years day drinking flat prosecco, unpacking, and recovering from hypothermia. Noah and I then tried to watch some season four of Dexter, which is the godawfulest thing I've ever seen, and went to bed late, still on pacific time. In the morning I made my merry way into work, Thursday, January 2nd, and it was there I learned from a patron that school was in session.

School had started back up. On a Thursday. One day after New Year's. Not on Monday, because that would be a normal thing to do, and nothing here is normal.

I didn't really care that the girls had missed a day of school, because they needed the day to rest, and any school district deciding to start school back up on Thursday, January 2nd, isn't really worth my time.  This is the very same district that cancelled school today when the sun was shining and the roads were dry, and that has threatened to call child protective services when my daughters missed six days of school total. Noah and I laughed and it wouldn't have mattered much, if it weren't for what happened the next day. The next day, (January 3rd), Noah was at work when a total stranger walked by him and said, "Oh, I heard your kids weren't in school yesterday!" At which point, of course, Noah quit his job, bought an Airstream on a credit card, and we cut our ties and left this small town forever, driving too fast, swilling lemon martinis, leaving all our possessions and cares behind.

Leave Your Fires Behind 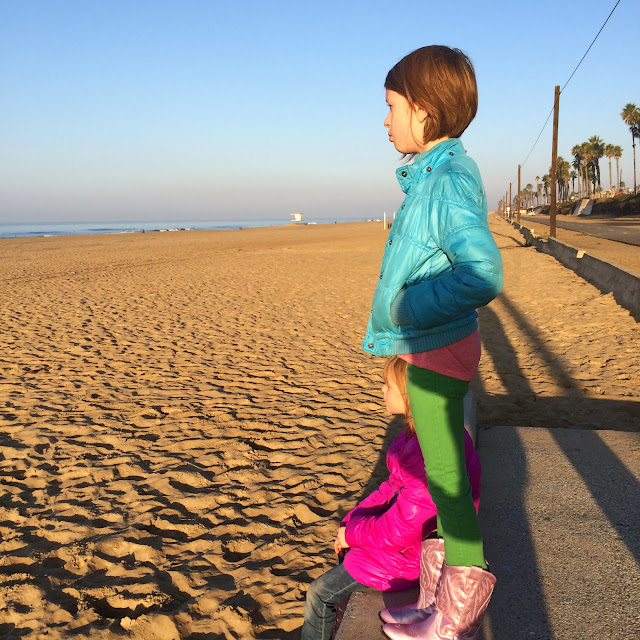 Last night I lay in bed, my brain racing with a million different ways to say it all. I am a Pacific time girl in an East Coast zone. I try to sleep at ten but lay awake til one. Did it all really happen? Did we rise at 7:30 on a December Sunday and walk with our children down the street to the ocean? Did I meet Elizabeth Aquino, whose writing and person I deeply admire? Most importantly, did I really drive the 405 freeway, by myself with the windows down? The trip to California swept me into a dream, like Viola tossing in the waves after the shipwreck, a dream of blue sky and warm air and a vibrant, pulsing city. It spit me out on a gray day in Charlotte, onto a cold sidewalk waiting for the airport shuttle, where I stood more like a shrew than a heroine,  my brain unable to reconcile what had happened to me with where I was. One life from the other.

In what will surely come as a shock to none of you, I admit that I am ready to leave Brevard. With it being the New Year and all, there is the pressure to make some sort of resolution, some declaration. But as I said on twitter, I don't make resolutions, I can barely make grilled cheese. I'm not looking for an overnight determination to change, I am looking for a different sort of resolution. A way to resolve our current circumstances with where we want to be. I tuck my girls into bed at night and almost every time they tell me that they miss Colorado. It's as if my yearning has crawled out of my chest, become a visceral beast prowling the halls, clawing into their brains through the ears. They didn't used to say it so much.

A friend of mine posted a word on facebook today:


Querencia: (n)
a place from which one's strength
is drawn, where one feels at home;
the place where you are your most
authentic self.

I am troubled by thoughts that awaken in the night. About this blog and why I can't write it. I wonder if, to write my best fiction, I need to be hidden away, not bare in the way a blog requires. I am worried about being authentic. I am worried about publishing my book. I am worried that I never will. I am worried that someone will call me "sir" again. I waver constantly between two extremes: grandiose determination, and crippling self-doubt. I lie awake at night and remember the ocean. How I stood beside it, and it felt like home.