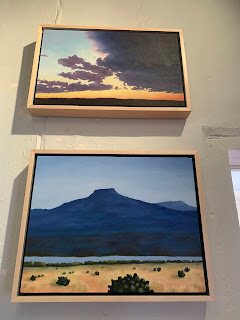 
I spent all of last week bouncing from hotel to hotel, working long days on my new production and sneaking out here and there to look at apartments to rent. The prospect of leasing as a single mother terrified me at first, and yet as I drew closer to signing a lease, the terror subsided and I felt excited and hopeful. The woman who showed me the 3 bedroom apartment she had to let, one with new flooring and funky old bathrooms, offered to cut my rent by $100 a month when she heard I worked in film. She was interested in the industry. She'd dabbled in it for awhile but had left it because she found it too hard an industry to work in as a mother. She and her husband now worked from home and together raised their son.

I applied for the place. My former landlord from Brevard now lives in Albuquerque and he gave me an excellent reference. The girls were excited and approving and ready to move. It felt like things were falling into place. Then on Tuesday the owners told me they'd leased the 3 bedroom to someone else; was I interested in their 2 bedroom?

I went to look at it. It was very funky and had hard tile floors but the price was good and I said yes, I was very interested.

I haven't heard from them since.

Perhaps they heard that our production shut us down on Friday. It was wild. On Thursday morning I was getting the room ready for our table read, which was scheduled for 4:30 that afternoon. But whispers were already beginning that some announcement might be coming. By noon, all meetings were cancelled. Netflix folks flew in from LA and arrived at 4pm to announce we were pushing filming for two weeks. They said that we would treat those two weeks as additional prep time. Most of us would keep working. Everyone would be paid.

I slept in a hotel. Friday morning I went into work and before lunch, they told us that production was now shutting down completely for two weeks, and that everyone was to be out of the building by 5 pm.

The film industry is a strange one in many ways. By nature, most jobs are temporary and uncertain. Getting work again depends not just on how good of a job you do, but on how much people like you. Who you meet. Who warms up to you. It's scary and exhilarating and I love it precisely because it lies outside the normal bounds of reality. The whole world of it feels unreal at times, and there are moments on a film set that I cannot believe my life is real. That I get to be standing in a sunset field in late summer Ohio, waiting with my fellow crew to see a car crash and roll three times on purpose. That I get to ride in the backseat of an insert car down a highway, watching the actors on a monitor in front of me as they act out their scene in the car behind me. That once on a dark mountain in the midst of all-night rain delays we piled several cast and crew into my car and read each other's tarot cards and drank chocolate whiskey. That one wrap landed me in the most bizarre restaurant I have ever seen, where a man played modern pop hits on a smarmy saxophone and waiters walked by with cotton candy in towers on white plates and we ate oysters and steak and decided that we must be in Russia.

But the strangeness of it did reach an unsettling height when I watched the entire showboating, steam-engined circus grind to a screeching halt in a matter of hours. Reluctant to keep paying for hotels, I asked if I could stay in one of the homes we'd rented for someone who has traveled back to LA. The homes are already paid for. They said sure.

So here we are, my girls and I, in a beautiful if gaudily decorated home with an indoor and an outdoor kiva fireplace and front and back patios where I can sit outside and drink my coffee and intend to write before I inevitably reach for my phone again, as I do every ten minutes, too distracted by news and worry to focus. It feels a bit like that scene from Zombieland where Emma Watson's character and Woody Harrelson's character hole up in actual Bill Murray's mansion to wait out the end of the apocalypse. Not that I think we are in an apocalypse, but surely we all can relate to the apocalyptic feel of grocery store aisles empty of food and malls with more than half the stores shuttered and we all of us are together in not knowing what will come next.

Working on films from September to December, I saved up money to allow me to lease a place. First and last month, deposit, moving costs. Now, Netflix is going to pay us for the next two weeks, and then, who knows?  I have spent far more than I care to admit on groceries. I'm not hoarding, but we are staying in a vacation rental that has salt, pepper, vinegar and oil and almost nothing else. I don't know how long we will live this eerie and beautiful  and nervy life--a rich person's vacation home, a dwindling savings account, work in an industry that might get back up on its feet in a month or so, but may not.

Yesterday morning I received news that a cast member on our show has tested positive for COVID. People who have worked in this industry far longer than I are saying they're expecting maybe two months before we get rolling again. In the wake of the news, I left our for-now home and went out for a walk. We are living on the banks of the Rio Grande, where I perched for awhile on a rock and felt my heartbeat and blood and all the nerves in my body return to a calmer, ancient rhythm. The earth is very, very old, and while we humans may be relatively new to it, there is something ancient and knowing in us as well. A rhythm that we can be reminded into by wind, by rivers, by trees. When I left that skinny water I turned south and walked toward Canyon Road, the art mecca of Santa Fe, lined with galleries and dotted with a few cafes and restaurants. It was nearly empty, a ghost art town. I went into a gallery at random, on impulse, an old house with creaking floors converted into a light-filled art space with tight corners and narrow hallways. To look upon art was as calming as listening to the river, and the work of one artist in particular drew my eye and made my body sigh. At the end of the hallway the owners, a man and woman, were speaking to each other in Spanish. I asked if I could take a picture. He said yes and thanked me for asking before returning to what sounded like an urgent conversation. The only words I could pick out were days -- miércoles o jueves, miércoles o jueves. Words that actually derive from Mercury and Jupiter, but have always sounded, to me, like miracles and eggs, miracles and eggs. I lingered long enough in that little room in front of them, taking pictures of nearly every painting and photograph on their walls, that eventually the man turned to me and asked me where I was from.

"I used to live here, but I had to move back to Colorado. I'm trying to get back to Santa Fe," I said. He was an older man, gray hair and beard, a distinguished face, and he looked at me and firmly said "You will," like a blessing. Like a promise. I thanked him. He asked about my work and when I told him about the film industry he gave me the phone number of a friend of his who works in set design in Albuquerque. "You call her and tell her you are a friend of Ernesto's," he said.

Who knows if Ernesto's friend will be of use to me or I to her? That isn't what matters. I know from my past that a lot of little sparks might all seem to be nothing but will eventually culminate into something, that even the ones that burned out and died were helpful in some mysterious way.

Here we are again in Santa Fe. 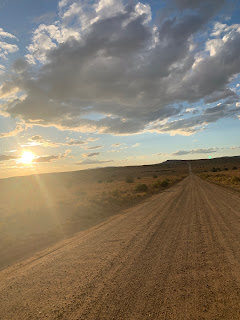 I didn't leave that day on the train. I arrived here in a different method, after I went out into the world and built a life and then watched that life collapse upon itself, again and again, until it was a piece of paper folded down to nothing. I no longer believe in things like justice or hope or luck, or even manifestation. But I believe in highways, I believe in roads, I believe in the way the evening light of New Mexico illuminates the whole land like a road to El Dorado, shimmering gold in the last of the sun.