Today is our Friday.

Tonight I am making Elise's chilaquiles.

Too exhausted to cook.

The other husband had more energy at night, but this husband works four day weeks.

Tonight the girls are having a slumber party in the basement with daddy.

Tomorrow we are going to go see The Frog Princess at the dollar theater. Don't tell Ayla, or all we will hear about for the next 32 hours is when are we going to see the Frog Princess, tomorrow, not tomorrow, that takes too long!

Ayla had a dream that I got stuck in quicksand and had a 'moldy bottom'. I feel terrible for her. What an image to have in one's head! Horrifying.

Ayla was confused and thought Sophie left because Ginger died. "If Josh had died instead of Ginger, maybe Ophie wouldn't have left."

Indy spent five minutes wandering around the house yesterday saying, "Where's Ophie's boyfriend? Where's my friend? Ophie, where are you?"

Today I have no content and no interesting thoughts. Sunday I will be rooting for the Saints and hopefully eating something cheesy and warm.

I also have no pictures because my camera took a swim in the pacific and hasn't been the same since.

Here is a picture from February 2009. I had woken up early to go out to Caribou coffee to write. The girls were already up with Noah, snuggled on the couch. Love Ayla's sly smile. 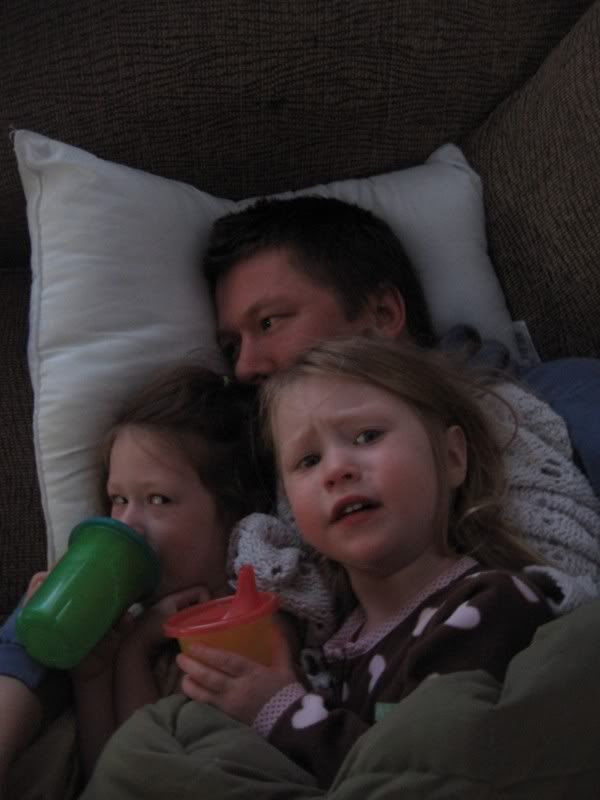 This is pretty close to Indy's Starbuck look. Which is not a look that means she wants Starbucks, but a look that reminds us she looks a little like Starbuck.

Oh, how I love Starbuck.

Have a lovely weekend. Get a Starbucks and go watch Battlestar Galactica.