There are things I recommend and things I don't, and one of the things I don't is getting yourself into the situation I got myself into on Sunday night. I should say we got ourselves into, because I was not alone in this. Here's the truth: I was sitting at dinner with three other people on Sunday evening about 5:00 pm, and we've ordered six plates between us--three were appetizers and one was a salad but still, six plates of food and this is to say nothing of the four beers. (One each). It's not like we've ordered lightly, either. I've procured a sandwich that has beer-and-coffee-glazed ham, brie, and some sort of leafery, on a toasted onion bun. Noah has mushroom stew over blue cheese grits. On top of this we've ordered buffalo wings and a delicate little number called Tater Tot Casserole with gravy on top. So you see, we're eating less like people who want to live to see tomorrow and more like people who don't believe there is one. There we are, at this cute little spot on the beach, and the waitress comes to see how we're doing and we tell her we need boxes because it is going on six in the evening and WE ARE GOING TO DINNER LATER.

"You're going to dinner later? Oh my gosh," the waitress says, and then she begins to laugh at our stupidity and we would be laughing with her were we not too busy looking down at our lamb corn dogs and blue cheese grits and feeling queasy.

To be fair, we had dinner reservations for a late 9:15 pm at Mozza. I don't know what, we think we're socialites or something. "That'll be really nice,"  I say ahead of time. "To get some cocktails around seven and have a late dinner. Like Parisians or extremely classy college students." Instead, because this was the day after a wedding and some people don't check their clocks, like ever, we end up getting to the cocktail joint for a four o'clock happy hour and then thoughtlessly continue to the spot where we had already planned to get lunch, blissfully unaware that it's dinner time until we have consumed a Texas portioned meal.

I have wanted to go to Mozza ever since I first heard of it's existence, a promised land like Eldorado, but Mozza was in LA and we were always in Orange County. Now, however, the gods have smiled and there is a Mozza in Newport Beach and here's what you do: you make a late arrival and pretend to be famous people and not a group of four idiots, or maybe hobbits, who are showing up for second dinner still satisfied from first dinner. You order a bottle of wine and you skip the appetizers. No matter what you do, you order the clam pizza. Then you slowly go to heaven or have a Harry Met Sally moment, and you bang the table and you weep. The other pizzas we had that night, I could take or leave but the clam pizza, with the white wine and the garlicky super deliciousness and the red chilies was just heaven. Then you ask them to call the paramedics before you order the butterscotch budino topped with salted caramel because you are about to go into a food coma and you will need to be revived.

Speaking of paramedics. You know what I recommend even less than second dinner? Forgetting to take your Dramamine until it's too late and you are taking off from John Wayne airport at an alarming 75 degree angle. One you will never get used to it, no matter how many times you have taken off from John Wayne you are still convinced that the plane's nose is going to flip backwards over the tail and you're all going to crash land on your heads. Then they reach a certain altitude, cut the engines, and wait to see how it all works out. Meanwhile the pressure changes are having party time with your sensitive inner ear areas. Imagine the woozy swoop of an elevator starting and stopping, over and over again, for forty minutes.

It feels that the ascent from John Wayne takes an hour, an entire hour during which you are bombarded with pressure changes and swervy curvy turning plane maneuvers. Then you start to feel sick. Really sick. You are terrified of puking but then you reach the place where you are begging sweet Jesus to allow you to barf your Mozza--the same Mozza whose take-out box everyone commented on as you were boarding and asked you to sit next to them and share and boy are they glad you didn't--because you're sure you would feel better. And the stewardess comes with cool towels. She puts them on your neck and your forehead and then hands you one and tells you to put it "between your girls", which is nothing less than a thoughtful touch. And finally, when you start to feel like maybe you are not going to die, you know what happens? You come in over the Rocky Mountains on a warm and windy day and the plane bumps and skips, not like a thing that is meant to glide on the air but like you are in a bathtub, and an angry toddler is picking you up and slamming you into choppy waters again and again. It goes on forever. You keep trying to ask your husband when the goshdarn plane is going to fudging land, goshdarnit, but you feel so sick and so certain of your impending doom that you can only moan, over and over, "dear Jesus dear Jesus dear Jesus" and you are not taking anything in vain here, you are praying to the powers that be to save your sorry life. You never were a good flyer. Always a little nervous and now this. Now the pilot decides he wants to reenact the crash from Lost and you are so motion sick it's like you've been hand selected for some god's wrathful revenge and all you've had to eat is rancid meat soaked in cream.

You know what that adds up to? That adds up to someone hyperventilating. That adds up to you weakly moaning to the flight attendants this hilarious punchline: "I can't get off the plane". At which point they decide to call the paramedics and to give you oxygen because you keep saying you can't breath, you can't breathe. Then the paramedics, the sick bastards, will ask you to stand and move into a wheel chair even though you are insisting to them that you are going to faint and wildly searching the crowd to see who is holding the ammonia they're going to need to bring you around. When you tell the paramedics you are going to faint, they will reply that there is no way this is possible. Not with a blood pressure this high. How high? 144 over 100. You know that that is, Paramedic Bob? That is the blood pressure of a woman who has seen her fiery death in detail and lived to tell the story. That is the blood pressure of a woman who has managed to hold down Mozza while her sadistic pilot decided to do an air show rather than a landing.

So just a recap here. Things I recommend:

Things I Do Not Recommend:
-Having second dinner
-Forgetting to take your Dramamine
-Taking your Dramamine too late and on an empty stomach
-Envisioning your airplane seat freed from the airplane and plummeting in a terrible death spin to earth some thousand miles below
-Hyperventilating and having the paramedics wheel you off the plane

Guys, it's just not as fabulous as it sounds.

Oh yeah, here is me with my sister-in-law Susie, in the one picture I took during three days in California: 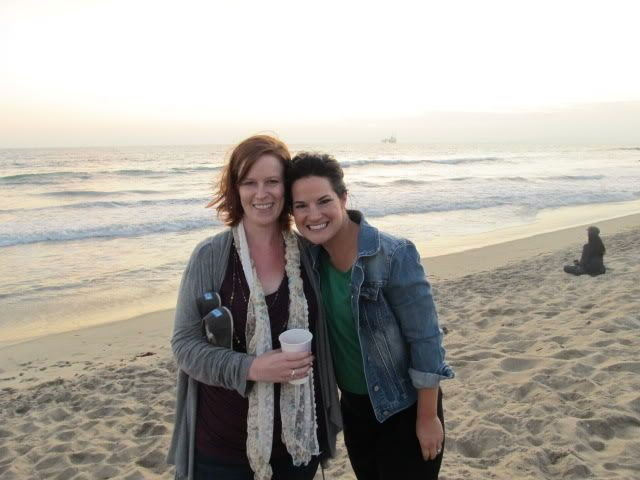 You're welcome, mom and dad!
Posted by Vesuvius At Home at 2:51 PM