The Restaurant Saint of Santa Fe 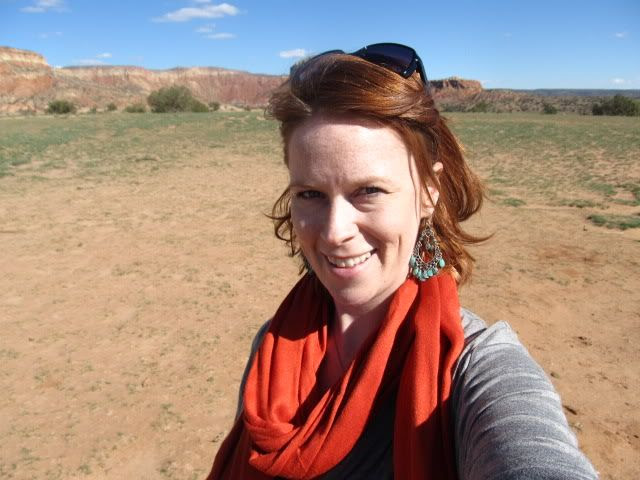 Ever since we got back from New Mexico, husband and I have been eating pumpkin soup like fall is going out of style.

This is because our first night in Santa Fe, we attempted to go to the Shed, home of some of the best food in New Mexico according to our Moon guide, and were informed that they wouldn't seat us in a half-empty restaurant for two hours. I'm sure this had nothing to do with the fact that there were four red-cheeked children in our party anxious for a hot chocolate after romping all late afternoon in the New Mexico brisk. We were hanging out in the courtyard with no back up plan, wondering what we were going to do next, when we were approached by an old man who I mentally referred to as The Drunk.

He came out of nowhere and started making restaurant recommendations. I hung back and let him talk to my dad because I do this thing where I get embarrassed. I was embarrassed that we were hanging out in the courtyard, in view of the restaurant's four seated diners who were surely locals, directionless and gauche and toting diaper bags and tourist cameras. Like the fact that we couldn't get a table at a restaurant on a Saturday night was a personal rejection, I don't know. I don't know what's wrong with me, I just know that life as me is hard and I often find myself telling the husband that you can't ask a person just to stop being embarrassed of something. Embarrassment is not something one can control. I am not Amanda Palmer, I will never take off my pants and waltz through airport security to the cheers of my fellow travelers nor pose naked to be sketched at a museum. So be it.

The thing about This Drunk was that he was uncannily knowledgeable about the restaurants of Santa Fe and it's domains. I hung back embarrassedly while he listed off three or four options to my dad, who does not possess what you might call a gregarious personality and probably listened silently while staring at the ground twirling his mustache. I'm not sure because I was smiling a ton and feigning great interest in the sleeve my daughter was chewing and my husband's mutterings about beer so that those seated bastards inside the restaurant would know I was having a really fab time. For the last three weeks my family had been baffling me by repeating this exact statement: "Let's go to the Blue Corn Cafe. It's a lot like Hacienda Colorado. The atmosphere's not great." My family knows I disdain Hacienda Colorado. On our last trip there together I had been lead to believe they disdained it too. Now they were not only suggesting Santa Fe's equivalent of the place, but adding in the fact that the atmosphere was comparable to Furr's Cafeteria and then suggesting we go there. You can see why I don't travel with my family often. (Love you guys!)

Eventually we began to disengage from the courtyard and The Drunk. I said thank you too many times, as I tend to do because I wouldn't want anyone to feel bad. My husband's the same way, a waitress could bring us icy hair soup and we'd both smile and beg thanks. Disengaging was harder than we'd anticipated, the drunk made no end-of-encouter reply like "good luck!" or "have a good night!" and I felt awkwardly like he wanted to hang out with us. Probably because he started to follow us down the alleyway, at which point I wondered if he wasn't knowledgeable so much as hungry and was hoping we'd buy him a two-enchilada special. I'm always telling myself I should be more like Neil Gaiman, who I imagine would have invited The Drunk to dinner, listened to his stories, and written a magical book about it, but I can't be Amanda and it increasingly appears I can't be her normal half, either. Eventually I was forced to say a final thanks and turn my back on the man, because he was still following us and I suddenly felt that I was the sole person responsible for his happiness.

Around the corner, we called the first couple restaurants he'd named and were told by both that they wouldn't seat us. The last place on The Drunk's list was the Guadalupe Cafe. We'd have to drive to it, but the lady that answered the phone didn't act like we were the first group of more than two people ever to seek sustenance in Santa Fe and so Guadalupe it was. I felt optimistic about it, because the Virgin of Guadalupe is my girl, see. But as soon as we spotted the place my feelings changed to skepticism bordering on pessimism. It didn't look like much. It's on the old Santa Fe Trail, a white stucco place in a sea of blue-doored adobe.

Then we went inside and I felt optimistic again. You see that dining with me is a manic-depressive affair and when the husband takes me out he never knows if the night will end in joy or tears. We don't dine out often, we tend to stick with Chipotle and even then I don't really like to branch out and order the barbacoa. Look, I did one time. It was a mistake.

I felt optimistic because the place was filled with locals. Happy locals who didn't glare at us when we trenched in with four kids and my drunk sister. (Just kidding, sis!) We asked the waitress if they had hot chocolate for the girls. She said something along the lines of "Um, I don't know. Hot chocolate? I think so. Let me see." Again I pitched into despair. One time as kids, my sister and I ordered chocolate milk in a restaurant and were served a Swiss Miss packet emptied into a glass of cold milk and clumped over ice. I was expecting the reverse of that.

But the waitress returned with two mugs topped in dollops of whipped cream. The husband and I told the kids it was too hot so we could taste it first--you know, for poison--and it was delicious. My husband ordered the chile rellenos, like no one saw that coming. I ordered the seafood enchiladas, half red chili half green. Then I displayed my grand wisdom by ordering a cup of the pumpkin soup. I'd seen it on the specials menu coming in. The rest of my family bowed and called me blessed and ordered the same.

The soup arrived. I wasn't expecting much. I'm used to everything not tasting the way I imagine it should. Like going to Harry Potter world, ordering the butterbeer, and finding it unbearably sweet. I took one bite of the pumpkin soup and went straight to heaven. Oh my laws a mercy. It tasted of true pumpkin, the way I imagine pure pumpkin should, which is probably something more akin to pumpkin pie but less sweet. The perfect amount of nutmeg gave it an autumnal bite. What's more, it was spicy. Peppery in the perfect way, a blissful blend of spice and sweet. There was a good amount of black pepper in it, but a deeper, roasty heat underneath. We think it had red chili. We should have asked her, she might have told us. Part of me didn't want to know. You don't ask the magician how he turns the hanky into a dove and you don't ask how they worked alchemy with a pumpkin. 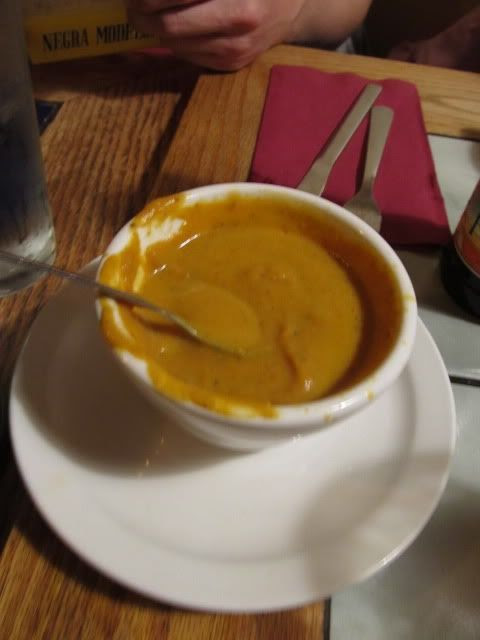 On this trip I learned it's really hard to make food look good.

I thought life couldn't get any better. The enchiladas came out.

The plate looked like the type of New Mexican food I like to get drunk and malign. If New Mexican food was a person, it would have sued me twice for defamation and probably won. The plate had a scoop of sour cream and some cheese melted over the top. No matter. My enchiladas were crab wrapped in fresh, homemade blue corn tortilla and drenched in the best red chili I ever hope to have. I didn't know red chili sauce could taste that good, now that I know I will never forget. Frankly, this chili might ruin our marriage if husband's attempts don't start to compete. For a long time I couldn't speak, I could only take bites and moan. The soft grainy give of the tortilla. The fresh tang of the the crab. And the smoky, spicy, not too bitter dance of red chili. The kind of red chili you know someone's grandmother has been tending to since dawn. Oh god. I might need to take a cold shower just remembering it.

Husband's chili relleno with walnuts was just as good, though it wasn't deep fried and did come out retaining a crunch. I liked it, if you're trained on soggy fried peppers you might not. We switched plates for a minute, but quickly switched back. I was having an illicit love affair with my red chili enchiladas and there are some things with which man cannot hope to compete. 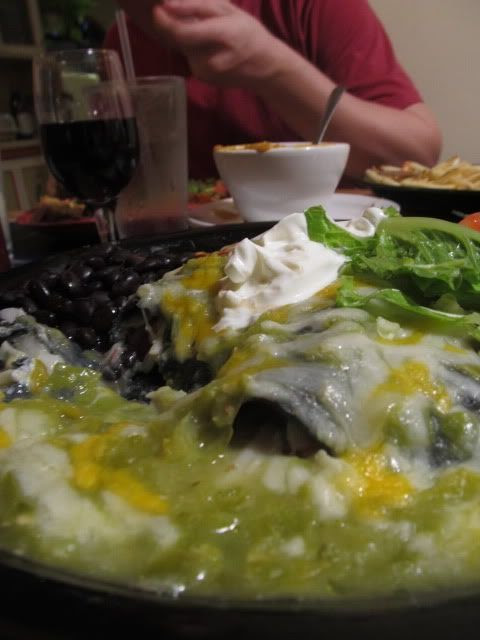 At this point, Guadalupe Cafe had made me a customer for life. But then--BUT THEN--our waitress, who might have been the owner, caught wind that it was Ayla's birthday and brought us a fat slice of chocolate cake topped with flan on the house. I've had flan before, at such fine eateries as Hacienda Colorado. It's been ok. This flan was creamy, slightly sweet, light in your belly. Paired with the homemade chocolate cake, moist and gooey, I can't conceive of anything better short of Dean Winchester bearing a tray of margaritas and the remote. The waitstaff started to sing, and on the first note the entire restaurant joined in with them. Everyone stopped their dinners to smile and sing Happy Birthday to my Ayla, who smiled shyly down at her cake.

I don't know if it sounds like the gift it was. To be hungry and tired, in a strange unknown city. To find a cozy little restaurant that feels, inside, like you're visiting Abuelita's house. To be served food that is better than you hoped. To have the locals not only fail to glare at your children, but to grin and sing the birthday song to them, to clap their hands and send warm vibes. By now, The Drunk was not The Drunk. Through the clarity of a beautiful meal, we saw him for who he truly was. A mystical being, half shaman likely, or spirit animal. A man who appears out of nowhere in cold sunless courtyards to selflessly guide weary travelers along a better path. More magical than a Moon guide, tastes more refined than the patrons of The Shed. He arrived when we needed him, then disappeared into the night.

The Restaurant Saint of Santa Fe.
Posted by Vesuvius At Home at 11:35 AM