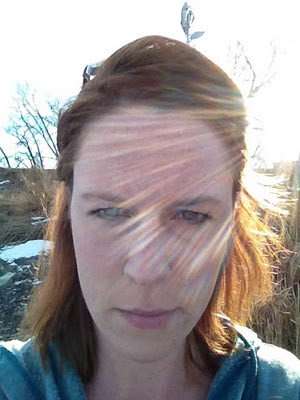 I saw a book, resting on a nightstand in another blogger's photograph, and I bought it immediately, that day, on the spot. I knew I had to have it.

And on Sunday morning, lying in bed, I discovered that Sylvia Plath kept bees over the summer and winter before she died. She wrote five poems about them. I discovered this while my husband sat in the white light of the morning kitchen, drinking coffee and reading about the things he reads about. Sports I suspect, though I know he likes world news and movie blogs too. Please don't mistake them with celebrity blogs, which he cares nothing for and neither, much, do I.

Last week in bee class the instructor showed us picture after picture of the process of setting up her first hive, harvesting her first honey. Pictures of herself, her husband, her fellow beekeeper friend holding up comb frames and smokers and golden jars of honey, and in every frame every person had Elphaba-green skin. The bees were yellow and black, the hives were white, the honey was gold, and the people were green. The first shot was of the friend only, smiling her in her bee suit but afflicted by a terrible verdigris. I waited for the instructor to explain, but she did not, and I thought maybe her friend's skin really was quite kelly, and it was therefore impolite to talk about it. She clicked through then, the power point, photo after photo of Wicked Beekeepers of the West, green hands on hives and forest-smiling faces and nobody said a thing about it. But of course, neither did I.

I drive my husband crazy, I forget everything. He tolerates my forgetfulness teasingly, or bemusedly, or distractedly. I lose the keys, I lose the forms, I lose my cell phone, the remote, the scissors, the tape, the earrings, the shoes, I even lose the coffee pot. (We found it in the fridge. We found the milk in the pantry). It's like I'm a romantic comedy heroine, except forgetful rather than clumsy and I don't wear high heels. "You are out of control," he says teasingly. "You are stressing me out." And I tell him, imagine what it's like to BE me, rather than simply be fated to put up with me.

Here is what it's like to be me: I am not like this in real life. I am not shy, exactly, but I am reserved. I despise small talk and ask questions that are too personal, too soon. I forget everything, including the story you told me, unless I wrote it down, which I probably did. I am easily overwhelmed. I make social appointments and dread honoring them. I'm not funny until you've known me a really long time. I get exhausted and pass out after half a glass of wine, I am therefore a failure at parties. I dread loud environments, I can't raise my voice, unless at my children. I am distracted. When you pause and search for a word I provide it for you, which annoys you and I try to stop, but I can't. Often I know where the story is going after the first sentence, and by the time you've finished it I've lost my energy to give the proper reaction. I can't admit when I'm wrong.

I want to live everywhere, all at once. Los Angeles, Taos, and Paris currently highest on my list. This sends my husband looking for jobs in each city, except Paris, to which he replies that I must be the one to get a job in Paris. He does not like the French (he does not know the French).But like Sylvia, I am wintering. Winter is for women, Sylvia writes. She is talking about the bees; in the winter they seal out the males, the drones, who don't make honey but consume great amounts of it, who would eat them out of house and home.

Winter is a thing to be survived, it demands female energy, quietude, patience, and peace. So says Sylvia, or so say I. Here I am, dear January, I am fallow. O'Keefe spent long periods fallow, so I read, long periods of gathering, of stillness, of waiting, and so do I. The muse, like spring, like honey and hurry and drone cells, drowsy cells, green grass, vital energies, always return.

What is it Oprah says? This I know for sure.
Posted by Vesuvius At Home at 1:18 PM

Labels: Full of Wish, It Turns Out I'm A Goddamn Hippie, keep the bees, Vesuvius on Ice