Our initial night in Colorado was spent in Longmont. It was the first time that I'd returned to the city, a sort of suburb of Boulder, since we moved away two years ago. As we drove outside the city limits and west into the foothills where we were staying in the Oskar Blue's farmhouse, I was overwhelmed and started to cry. We lived in Longmont for two years, as our girls grew from 3 and 5 to 5 and 7. When you return to a place you have once inhabited and then abandoned, it is like coming back to capsule of time when your children were very small. You can almost see them there in the snow globe. Here they walked around this lake with their chests bare to the sun. Here Ayla took sensitive pictures of gelato, so close up they appeared to capture alien worlds of pink and green hills with chocolate flecks. Here Indy would be released from preschool and run, grinning, into my arms. Here is where we were with them when they were very small.

Of course I had been traveling for ages--a four hour drive to the airport in Atlanta, two hours there before boarding the plane, a three hour plane ride, and hour from Denver's airport to Longmont. I was dehydrated and exhausted. I fell asleep quickly and we woke to socked-in rain, Brevard-style, the sky low and dripping. That afternoon we were reunited with the girls and drove down to Denver to have dinner with my family. We had time to kill so we did a tour of the old neighborhood in Denver, the place we'd lived before Longmont, when Indy was 9 months to 3-years-old and Ayla was 2 to 5. This foray into the past was less emotional, and it seemed only natural when we drove up to our old house and found it empty, just the way we'd left it. Since it happened to be between renters, the girls were able to peer in all the windows and see their old rooms. I even let them go into the backyard to revisit all the spiky weeds--we remember this particular house by those weeds, referring to it now as the "Spiky weed house". Despite the spiky weeds it was a pleasant backyard, big and green with vines hanging down for the girls to play amongst when they were small enough to crawl into the tunnels the greenery made. After the house we went to the park that was down the block, and I told the girls how toddler Indy used to pull the larger Ayla up the hill in her red wagon, a stout little confection full of energy and confidence, her shoulders hunched and powerful, like a bulldog. The weather was threatening. The next day the sun would come out. But before all that we paused in front of the house of spiky weeds and recreated one of my favorite pictures of the three of us, ever. 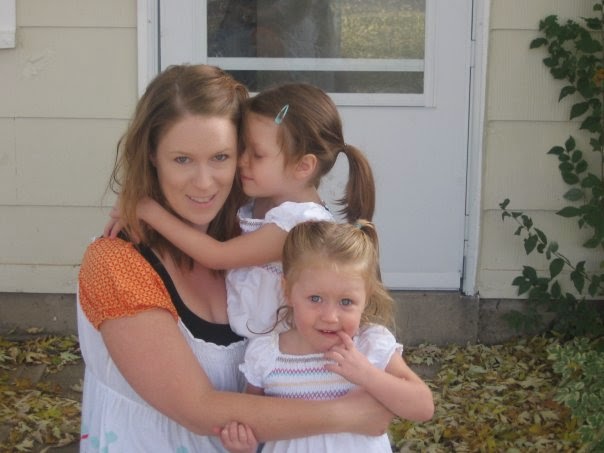 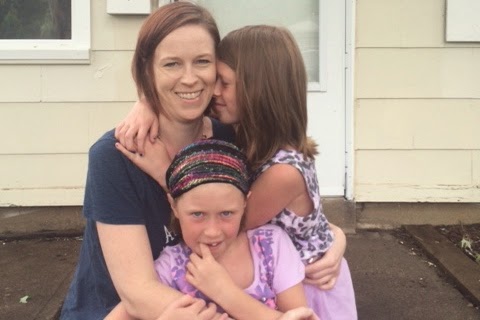 I really sort of despise nostalgia, so of course it only makes sense that I have indulged in it here. Lately my writing seems to be indulging in everything I've ever despised. Anyway, there we were. Here we are. Life is strange and mysterious.
Posted by Vesuvius At Home at 10:43 AM