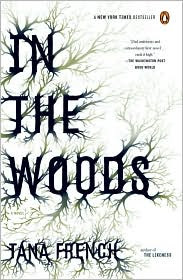 I just finished The Lace Reader by Brunonia Barry. It was pretty good. Worth a read if you're looking for something book-cluby. But I am really excited to tell you about this: Tana French's debut novel, In The Woods.

It's a mystery/detective novel. Not the sort of thing I usually read. But the writing is great, and the story is so creepy. Just check this out, from the back cover:

"Three children leave their small Dublin neighborhood to play in the surrounding woods. Hours later, their mothers' calls go unanswered. When the police arrive, they find only one of the children, gripping a tree trunk in terror, wearing blood-filled sneakers, and unable to recall a single detail of the previous hours."

That child is the narrator of the book , Detective Rob Ryan, and he's working a case of a girl murdered in the same woods where he was found. It's a perfect read for October, cozy and eerie and just spooky enough. It won the Edgar Award (as in Allen Poe) for Best First Novel, and the jacket boasts blurbs from NPR and the New York Times Book Review--but unlike most books that boast good reviews from NPR and the NY Times, it's not stuffy and pretentious and self-satisfied.

I highly recommend it.
Posted by Vesuvius At Home at 3:42 PM