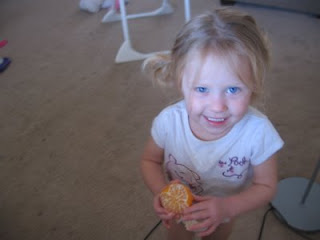 She says it quick, each syllable a descending note. Just the way santa laughs, if you rushed it all together.

Indy won't come out of her room when nap time is over. She'll stand inside her door and knock. Gently. If I don't open it soon enough, she'll lay down on her bed and whine, softly.

Indy. Will cradle your face in her soft, puffy hands. Stroke your cheeks. Pull back and gaze at you adoringly. Press her lips hard to yours and go "mmmmmmmmmmmmmmWAH".

Indy will sing to you if you're sad.

Indy is really good at saying thank you. For feeding her. For changing her diaper. For opening a door she can't. For giving her a toy. For putting on Curious George. "Dase you, mom." (dase = thanks)

Indy also says no thanks. In a way that destroys all my parental authority. As in, "Indy, let's put on your shoes."

Indy cocks her head. "No ganks!" 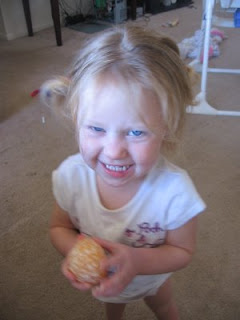 Indy will smile and flirt with and talk to and charm strangers.

Indy is terrified of: loud noises, being held upside down, and Ayla pretending to be a monster.

And apparently, of cupcakes: 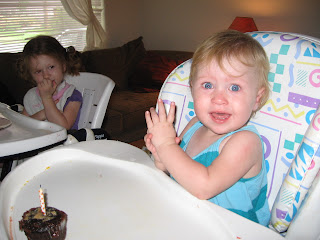 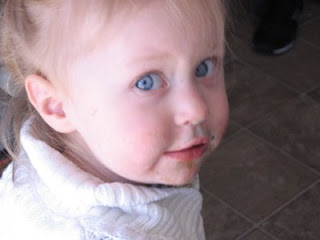 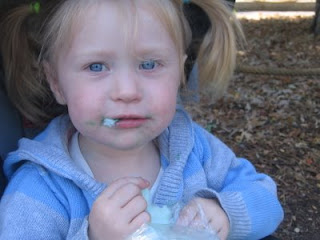 Indy picks up the kitty by wrapping her two hands around its neck and squeezing. We are trying to teach her not to do this. But you should see the way she grins, as she does.

If Indy drops or breaks something, she turns to you and draws her breath in sharply-- "Huh!"-- and makes her mouth a round little 'o' that somehow manages to smile and shines her eyes at you. And you can't be mad. 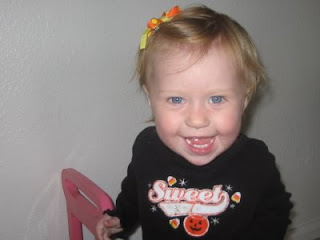 When trick-or-treating, Indy marches right up to the people handing out candy, for the second, or third, or fourth time, and holds out her bucket and smiles and says "More Please!" and they give her more. How could they not? And mom doesn't have the heart to stop her. Mom can't help it. Mom is impressed.

Indy is so stubborn it impresses mom even when she's being naughty: Flying down the highway with nowhere to pull over and Indy has wriggled out of her seatbelt and mom is pinching Indy's leg and saying "put it on! Put it on!" and Indy is crying from having her leg squeezed but still shaking her head and saying "No! No. No." 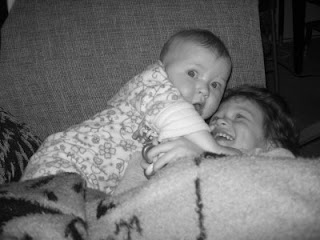 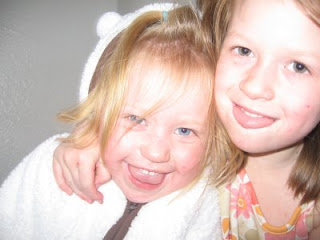 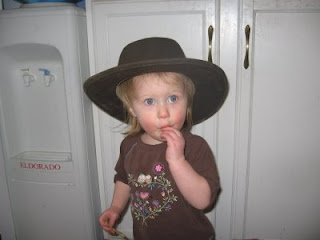 Indy loves to talk on the phone. Mostly she says "An Aye-uh. An Aye-uh si Aye-uh. An mommy si mommy. An daddy no hose. An daddy si. An uh Aye-uh, an si NO NO!"

Indy makes perfect sense to herself.

When mom says no to Indy, Indy will turn to Aye-uh and say "Aye-uh?" and make a sad face and open her arms for a hug. 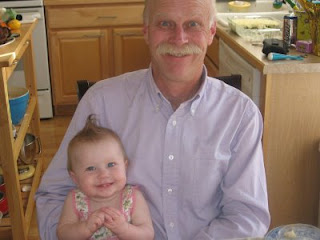 And her mom's Grandma Hartke. 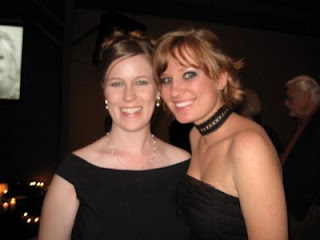 (before Mercy wore eyeliner. when Mercy was still blonde).

Sometimes I look at Indy and think: How did that child possibly come from me? Where am I in her? This sugar-cookie-haired smiling singing chubby tyrant? This outgoing, engaging, charming little live-wire with eyes the color of the sky in October? 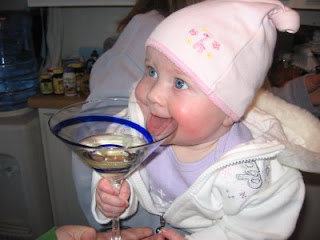 She gets her personality from her dad, I guess. Or maybe my mom. Both. And from her. The bit of her that is all her, and no one else.

But not from me.


I see me alot in Ayla. And almost never in Indy. And I think both ways are pretty cool. 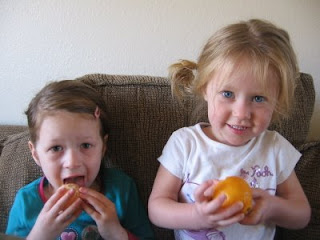