Last night we were settling on the couch to watch a movie. Ayla asked when we were going to grammy's house.

In three days, I said.

Ayla sighed. "I don't even know what color grammy's house is anymore. Or what flowers are there."

She actually said that.

Then Wall-E came on. "Oh! Grammy has this movie I sink," said Ayla. "Oh wait, no she doesn't. Does she? Does grammy have this one?"

We told her no. She was quiet for about a minute.

"But mom? Do YOU sink Grammy has this one? With da robot?"

No Ayla. Grammy does not have this one.

"But she does, I sink. I sink grammy does. Or maybe I sink she doesn't. Have dis one."

On and on it went. For a full five minutes Ayla discussed with herself. Topic: Does Grammy or does Grammy not own Wall-E? 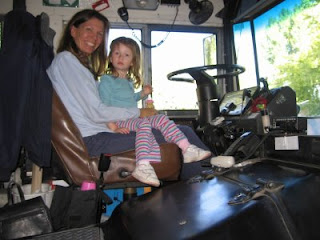 Posted by Vesuvius At Home at 3:21 PM