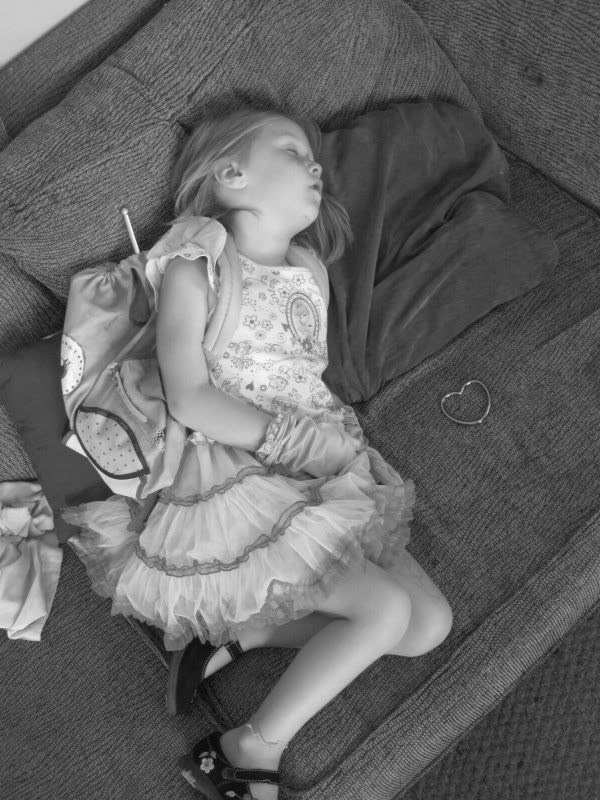 We went to Walmart to get Indy ready for school. She looked so small, too tiny to be carrying that big backpack on her shoulders. I asked her if she was excited and she said "uh-huh". I'm trying not to talk it up to her too much. I don't want her to sense what a big deal it is and freak out. Indy rarely freaks out, but when she does it isn't pretty.

I have visions of her lying prostrate on the circle mat, the one with the letters and numbers, screaming 'NO!" and refusing to leave.

We met her teacher. Indy wanted her attention and tried to charm her. The teacher wasn't having it. She wasn't being mean, she just wasn't going to be charmed. It made me sad. I want everyone to adore Indy the way I do. I want her to go through life being as loved by everyone she meets as she is by mom. All she gets from me are shining-eyed, adoring, smiles. I don't want her to realize she won't be able to elicit that from everyone.

Noah says it will be good for her to learn that. But I have my doubts.

On the other hand, I'd rather her grow up to be an authentic person than a manipulative one. Charm and manipulation are the same coin, you know. This is why I never trusted a charming man.

She feels younger than Ayla did when Ayla started preschool because she is. Younger by almost an entire year. There are only two other girls in her class, but I'm not too worried about that. Ayla's best buddies in preschool were two of the boys. I'd arrive early to pick her up and see her wrestling with them in the leaves. Once one of them was running with a football and Ayla tackled him. The boy's mother informed me that her son wanted to marry Ayla.

I hope that mom was ok with a daughter-in-law who wouldn't hesitate to tackle her son, should the need arise.

And Ayla, my little bird, my first born, who has had near SIX years at home, is starting the full time school. 8 to three. Her class is full of boys too, I don't know why. She's so excited. I hope school doesn't disappoint her. I hope they give her time to paint, my tender little soul who calls herself an artist. Who told me when she grows up she wants to brew beer with dad. I was feeling emotional that day and said a little too passionately that when she grows up I hope she will take time to travel. To travel all over, I said. To see the world.

Then I added a guilty little: "If you want to."

Because who else will?

I am Vesuvius and I have always dreamed of adventure.
Posted by Vesuvius At Home at 12:26 AM

Labels: Travel is a Privilege