Dear Elway: Tebow Goes Or I Do 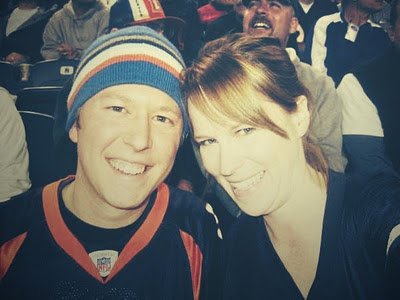 Lately I have been enjoying myself by teasing Mr.V, stating frequently that I'm going to change teams.
(I don't know if that just made you think, Lesbian!, but that's not what I mean).
What I mean is that I dislike Tim Tebow. I don't like his politics, and I don't like his over-the-top and gaudy displays of devotion, but put those aside and what we have left is an Evangelical who can't play football. I understand there were a few games where Tebow ran it in at the last second and the Broncos won, but those games weren't won by Teeb Teebow. They were won in spite of the Teebs; they were won by our defense, by Matt Prater, by Marion Barber, by luck or chance, certainly not by Jesus, (ok, maybe by Jesus), and not by Tim Tebow. You know what else is that unlike, apparently, most of Denver, I watched the first three quarters of those games and Tebow can't complete passes. Yes, Virginia, there is a Jesus and maybe he cares about football in America, where we have nothing much to worry about other than who wins on Sunday night. But I can't think of any other profession in which a person would be allowed to perform a clown show their entire shift, do some spectacular pirouette (which was not, by the way, in the job description) in their last three minutes, and prance out on fancy feet and prayerful hands to great applause.
My point is that Tebow is ruining my Broncos for me, and so frequently these days I tell the Mr. V that I'm switching teams. "You can't just switch teams," he says, embarrassed and chagrined by what he views, I suspect, as my uniquely feminine irresolution, to which I just smile inwardly and reply, "Of course I can". I can do whatever I want, including declaring, "I'm a Vikings fan now," right after kickoff when Mr. V has just taken a bite of loaded nacho and watching him choke on his pinto beans. "You can't do that," he splutters, my earnest husband, who converted to the Broncos himself when he moved here from Raider Nation and met moi. "It doesn't work that way".
"It does now," I say, which makes me feel powerful and impervious to things like Conservatives and people who use the term "Tebow Time".
I lean toward the Vikings because, why not? Because I think they were my Uncle's team and that seems a place to start. Although sometimes I declare myself a Green Bay fan just to see how far Mr. V can sputter pilsner across the room. "Oh my god," he shouts, like Will Ferrell doing "angry", except he's dead sincere. "Oh god, why?"
I don't know, I admire the tradition: Lambeau field, the Lambeau Leap, the Chedder Headers, or whatever. Brett Favre was cute until he turned into Kim Kardashian, or not even her but one of the lesser, whinier K's, Khloe maybe, or Konstance or Kontinence, but he's gone so I don't have to worry anymore. I'll never be a Jets fan; they treat their female fans horribly, and although Pittsburgh has the highest percentage of female fans in the nation, their tradition, to me, reeks of poverty and despair. I mean, why else would you let rapists play for your team? That cold, industrial climate, it changes a person. I'll never go to another team in the AFC West, why would I want to? (I WOULD DIE FIRST). So Vikings or Packers it is; tell me, do I look better in purple or green?
"Here's what else," I say to my husband; it's almost coy, this dance we do. "I'm a Lakers fan now."
"No," he gasps, truly dismayed this time.
"Yes," I say. "It's my new thing."
"You can't do this. That's what all those stupid famous people do. They move to L.A and become Lakers fans just because it's cool, to have your picture taken courtside. Leonardo Dicaprio. You can only be a Lakers fan if you're actually from L.A."
"Nobody is actually from L.A.," I reply. "L.A. is a city you choose. Anyone who was actually born there has moved away." I know this to be true somehow without actually knowing it. "Also, I want a USC shirt."
At this point my husband just looks at the ground and shakes his head. His spirit leeches out of him while I hide my grin and fold the laundry. "That's not how it works. You went to CSU, you're a CSU fan."
"God no," I say, shuddering. "Green and gold?" Gag me.
"You don't have any connections to USC."
"Your grandpa went there," I say. "And it doesn't matter, anyway. I'm transforming myself. I'm like Madonna now. I can wear a USC shirt if I want. And I am a Lakers fan, so you'd better fucking like it."
It feels important. To celebrate myself and sing myself with the NFL Licensed Gear of my choosing. Fake it til you make it, and so, though right now I'm here, in the cold with Terb Rebow taking us to the playoffs, in my heart I'm in a city where it is warm, where the people are plastic, where team loyalty is a feeling you chose and where people reinvent themselves every day, every evening, every sunrise.
And so can I.
Posted by Vesuvius At Home at 10:51 AM

Labels: City Of Dreams, The Divorce Goes Through On Monday, tongue in cheek, Vesuvius and the Terrible Itch, Vesuvius Cracks Up