The Monkey Bit Is True 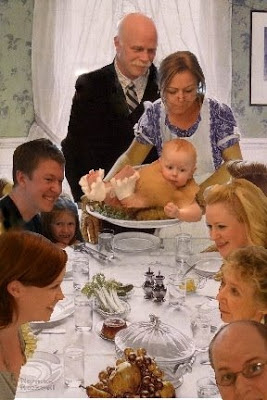 Short fuses tend to run in my family. Take this example: we are driving away from McDonald's when Indy thrusts her hand into her Happy Meal bag, pulls out a toy, and immediately tosses back her head in the screaming, wailing, red-faced grief of a Mafia Don whose son has been killed by the Don's own hubris. The cause? They have given her a toy with wheels instead of a toy with over-sized eyes. Of course, I begin to display my hard-won parental wisdom by raising my voice to a volume to compete with her's and saying, with robust enthusiasm, STOP SCREAMING I WILL GET YOU ANOTHER TOY WHY CAN'T YOU JUST STAY CALM???? I then go on to scream, WHY MUST YOU ALWAYS SCREAM AS A FIRST RESORT before bursting into laughter because at least I can see the irony in my own embarrassing humanity. Dear daughter, do as I say and not as I scream.

This is a strange time in my life. My husband, head brewer and come-lately media mogul, is going gray from the stress of his job. He took this position looking like Obama of 2008, and here three months later he's already the wizened Obama of 2012 and so probably, secretly, a socialist. He rises hours before the rest of us, works late, and turns in around 8:30 pm. I have stopped giving him grief for being so early-to-bed, somewhat out of compassion but mainly out of realization that this gives me a good 90 minutes alone with the remote. He works weekends, he works holidays. On Thanksgiving morning he will leave us and fly to Vancouver, where it just so happens they film my beloved Supernatural, and where I have always wanted to go (since the moment I heard he was going there). It's not like he's going to have time to hang around the set like an estrogen-pulsing fan girl but still, I'm jealous. This is a small town, no matter how many times my mom insists that no self-respecting small town has a Wal-Mart, and he gets "recognized" in the grocery store even though we both know I am the one that was supposed to be famous. While he does all this glamorous labor, I putter around the house like a retired poet. I clean the kitchen, I tinker with my novel, I go for walks in the woods. Lest you think I'm some kind of slave-driver, know that I do 90% of the child care, 70% of the meal making, and 100% of the yoga. I also spent a morning planting baby spruce trees, and I've been meditating to boot. Look, I don't mean to be prideful, but I'm just saying: you could pretty much call me Oprah.

It's strange times and short-fuses, that's what I started out to say. Noah's insane hours preclude me from having any reliable time to commit to a job, so I float along here and try not to pressure myself into becoming a Stepford Wife, which would just make me bitter (especially since I can't afford the Valium). It's hard to feel like I'm pulling my weight, even if I am doing enough yoga for the two of us. Don't worry. The girls and I will go to our friend's and neighbor's house on Thanksgiving, and I will be all right, although I will miss Thanksgiving with my family and their bouquet of firecracker-short fuses. I might actually FORGET it's Thanksgiving if no one smashes a plate or throws a drink or claims there is a monkey dancing inside the turkey (love you Grandpa may you rest in peace). My family will miss me, but it will be enough for them to know that here in Brevard I'll be drinking cranberry mimosas, complaining about how much I hate Thanksgiving food, and not helping out too much in the kitchen.
Posted by Vesuvius At Home at 12:35 PM