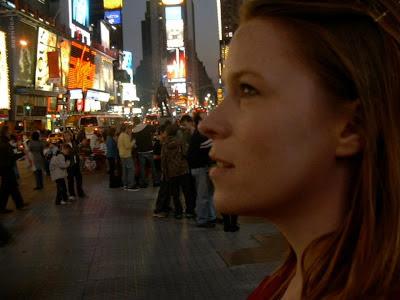 Four years ago, on Election Eve, I was in New York City with my dad. We were calling it Obama Eve and joking that if we left our shoes by our door, in the night the Obama Child would come and fill them with hope and health care. I was giddy, my whole generation was. In Union Square Park someone was hawking shirts--Orcas for Obama, Polar Bears for Obama, Eagles for Obama. I bought the one that said Wolves for Obama, thinking its message would be clear. This was when Sarah Palin was hanging out of helicopters shooting rifles at wolves. Wolves in Support of Obama. Of course, there is a second interpretation, one I did not intend. On Election Night we left the city, we got on a plane. The stewardess treated us to free tv so we could watch the election results. Obama was winning. Everyone was happy. Hope and change were on all the lips and in the air. We knew, for awhile, that we can make our world new. We hadn't forgotten, yet.

I had just seen Manhattan for the first time and it was too soon to leave. I don't know what will happen in this election or the next. I know how expectations lead to despair. But I also know that late one autumn I spent three days in New York with my dad. I looked at art until my eyes bled. We drank Smithwicks and ate cheeseburgers at a bar in Hell's Kitchen before walking to the theatre district and watching Daniel Radcliffe strut naked about the stage. I know everything is wrong with the world. But listen: the leaves turned late that year in Central Park and were waiting for us, comforting crimson and gold. A Chinese immigrant stopped to give us directions in the metro station, rocking his pig-tailed toddler in her stroller. The city was full of marvels and I could have stayed forever and tasted them all. Obama was winning. Manhattan was life, the universe, the whole raw oyster with the pearl. We boarded a plane.The next morning I woke up in Denver: jet-lagged, a mother, the world the color of straw. I sat stunned with my coffee while my daughters made their noise and mess. I woke up, Obama was elected president, everyone was talking about moving forward but all I wanted was to go back. Not back in progress but back geographically and back in my spirit. No matter what happens, I want to stay in the place of hope and possibility. Forever.
Posted by Vesuvius At Home at 10:27 PM