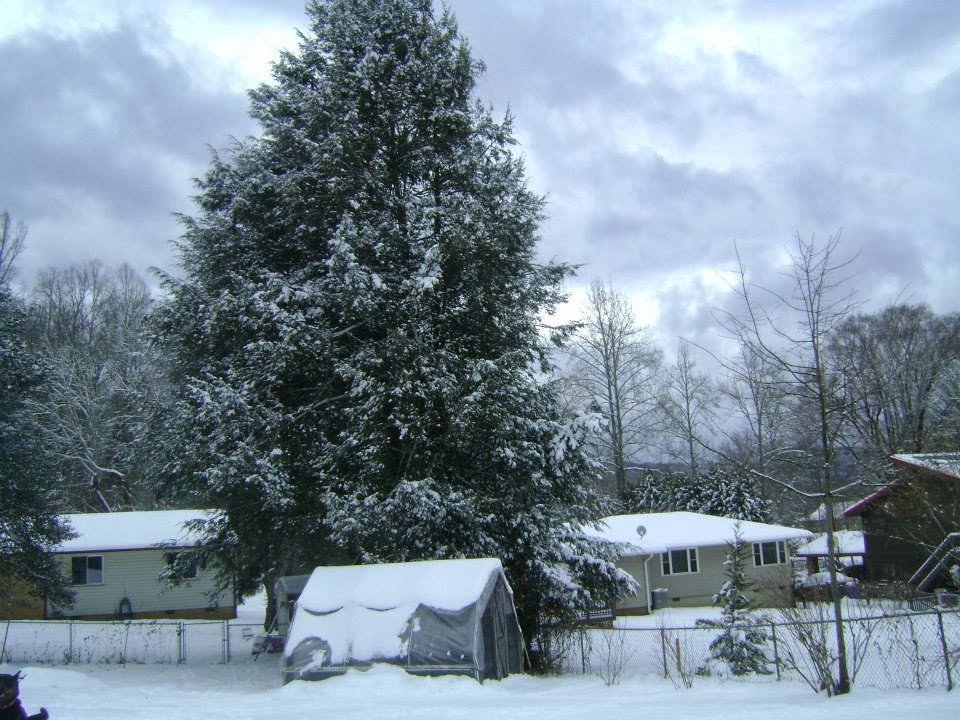 My neighbor took this picture
of the fantastic sky and that's
our house on the left.


Yesterday morning after reading the news, something I never do, I started wondering if we had enough food to last us 24 hours. We did, but something about the media and everybody on Facebook saying that we are about to be hit by the new ice age, that the White Witch is descending upon the south to plunge us into a snowy hellscape from which we might never return, that WINTER IS COMING Game of Thrones style, has a way of making you question whether you've bought enough fatty foods and are your vibrator batteries going to last you through. They were telling folks to fill tubs with emergency supplies of water. I felt this was a bit inflammatory. And I knew I would go outside and eat snow before I would consume anything from a bathtub.

I asked Noah to go to the store for the second time in two days. I was concerned that the grocery store might actually shut down, something I have never witnessed in all my life, living in Denver and going to school with a foot of snow on the ground. Well the grocery store didn't shut down, but the liquor store did. It is the armageddon, I thought, and then I took my dog for a walk down a snowed in street at night. They don't have plows or technology here, so the world was still and absolutely white washed. It was snowing in a strange way, hard grains spattering the furry hood of my Yeti jacket. We went down to the field and the dog reveled in the snow like a dolphin on the waves. She danced and leapt in the field where I could see the husky remains of some harvested crop peaking up through the snow in abandoned rows. I want to call it corn, but I don't think it was. In the far distance was a hill, and high up on the hill I could see the lights of one house shining hazy through the falling snow. It felt like whoever lived in that house and I were the only people on earth.

The tiger-striped dog rocketed back and forth and bulldozed into me, body-checking me with her joy. I'm not crazy about this dog who always has such high expectations for me and destroyed my Minnetonkas. But she was in her element. The sky was that orangey pink, you know, still pregnant with snow. We were alone. It was dark but snow-bright and we weren't afraid. We turned to go home and a car came down the street. They spotted us and turned on their brights which felt accusatory somehow. I called the dog but she ran toward the car--don't worry--and the car didn't really slow down. The dog danced away. I raised my palms up to say sorry and as the car passed I saw it was the police. I thought they might give me a ticket for having a dog off a leash but they just kept driving in their ominous way, beyond us and into the night. There is no story here, just a woman and a dog saying hello to the earth before turning and heading for home.
Posted by Vesuvius At Home at 12:56 PM