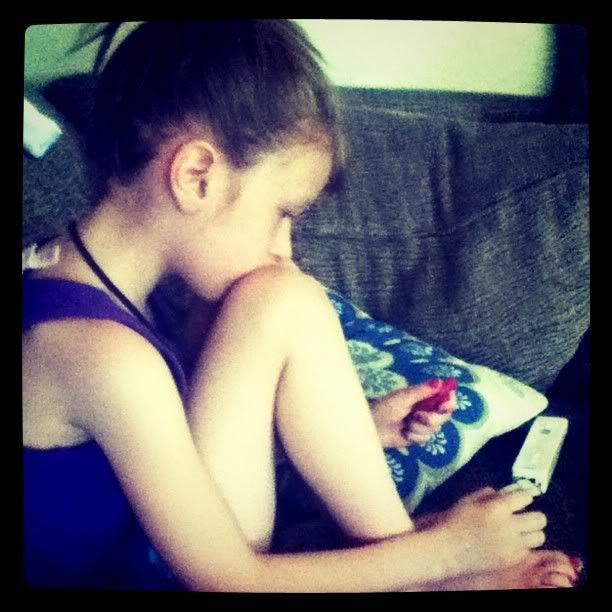 Ayla used to ask me to tell her stories.

She had her special requests. "A mermaid--a purple mermaid with a sparkle tail--and a prince, and. .. .pink kitties. And a golden seashell. By the sea. With a castle. And a sea witch."

And I would bake up a fairy-tale with the required ingredients.

Sprinkle in a pinch of 'mermaid saves herself/sister/prince'. You know. For spice.

She could have listened to me tell stories all the time, but of course I couldn't tell them all the time.

I got tired. I have been engineered to resemble a human in nearly every way and, like humans, I eventually tire of any activity and need rest.

But usually when she asked, I'd weave her a Mermaid Tail. Kingdoms by the sea.

I'm brushing her hair to get her ready for karate. Ayla Beloved Tuttle is 6 years, 8 months, and 7 days old. When this moment is over, she will retire to the couch with a small tube of nail polish and bend over her toes, looking for all the world like a 13-year-old. She will write a list that says, in scrawling but improving script, "nail polish. lipstick." She will put on iCarly.

I release her hair from the ponytail it's been in all week and it explodes like a Lee Krasner. She looks like the character from Neil Gaiman's "Crazy Hair". She looks like Beatrice Fluffernutter, or Zoe Azul, or whatever her name is, the girl who goes to school and uses her long red tendrils to write on the chalkboard. To distract her from the pain, I start to spin Ayla a yarn. About how she lived with the wolves. She learned where the wolves found berries in the summer, and where they went to stay warm in the winter. She learned the precise wolf calls for 'I love you' and 'we're out of peanut butter'. Ayla was silent.

I thought she was listening.

In the story she came back to me with her hair looking like she'd been raised by wolves. Which of course, I told her, you had. I was so happy to see you, because I missed you. But one day you began to miss the wolves. So you went out the front door. You stretched your long neck and howled your wolf howl. Then you went down on all fours--

You know the way. You've said it, you've heard it. The two syllable lament. "Mooo-oom."

"I don't want to hear this anymore."

I don't know when this happened.

I finished brushing her hair in silence.

On her way out the bathroom, she paused to grab a tube of lip gloss.

She never saw me cry.
Posted by Vesuvius At Home at 1:27 PM

Labels: Legends of the Fall, Little Bird and Starbuck