On The Road Part I: Holy Something 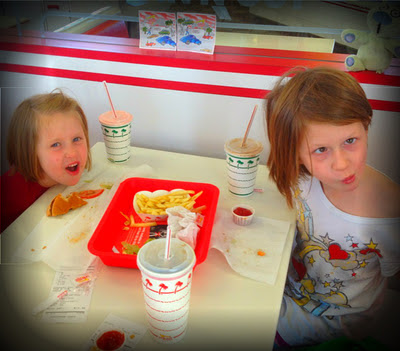 "What if all the girls on the whole earth said 'CHUM-chum. CHUM-chum. CHUM-chum,'" Indy intoned like a chant as we zipped through the endless Mojave desert, brown mile after brown flat mile. "And all the boys said 'Rocka-rocka. Rocka-rocka. Rocka-rocka'."
That's pretty much how the day went.
Mr. V woke me at at 2:30 am and we hit the road. I wished for a valium because few terrors match that of barrelling down out of the Eisehhower Tunnel in the pitch black, in the dead of night.
I woke up in the middle of nowhere, Utah. Black Horse or Black Rock or Black Devil. So beautiful it breaks my heart, I'll say it twice. The rocks are draped like velvet curtains, lit up the colors of sunset. All through Utah, across the stretch of salt flats there was light, powdered sugar snow.
We stopped in Vegas, where the Goblins were finally baptized. By that I mean they had their first In 'n Out. I tend to think of everyone that lives in Vegas as a compulsive gambler. My only evidence this isn't true is that godawful movie, Pay It Forward. I'm pretty sure Haley Joel and Helen Hunt weren't compulsive gamblers, although now I wonder how a single mother got the money for all those lanterns? But look, I've been in the car for seventeen hours, you shouldn't listen to a thing I say.
"I'm smaller than God," says Indy. "But not smaller than baby God."
I think she's a genius.
In San Diego, this: billboards advertising "EZ-Baccarat: Tableside Dim Sum." From this I gather that Burt Baccarat wants to attend at my table and serve me steamed buns, and that he will be sexually promiscuous. We've been driving for fifteen hours and I can't tell if this is a good thing.
I think it might be.
I am disappointed with the number of light-strung palm trees in Southern California. I think my idea of California Christmas was irrevocably formed by my first Sunshine State Christmas in Palm Desert. In that land of milk and money, there is a silver dollar for every retired crevice and a light for every palm tree. Not true in Riverside or San Bernadino. God help me, listen to what I'm saying. I shouldn't be here. I shouldn't be writing this. I have been in a car for seventeen hours and I think I encountered the real Jesus--you know, not the flaxen haired, but the Middle Eastern one. He told me he is as indifferent to Tim Tebow as he is to sexual orientation. Then he shared our plan for taking Tebow down, but I can't tell you about that now.
Indy calls them Pom-Pom trees and you know:
She's right.
xoxo
No More Driving Ever
-V
Posted by Vesuvius At Home at 10:20 PM

Labels: on the road, Vesuvius Cracks Up