Vesuvius, the voice whispers. Post something happy on the blog today.

Happy? I say. I'm afraid I don't know what you mean.

You're not always so moody, says the voice. It's ok to write about those times too.

I don't get it, I say. You mean like cake pops? It's true that on Friday there were cake pops. But there was not Supernatural. . .

But just now, I answer. Just now, Ayla woke up and immediately began to cry because she couldn't watch her show. Oh what a beautiful morning, oh what a beatiful your child has thrown herself on the floor in the pre-dawn chill and is sobbing because she wants to watch Goosebumps, not Rugrats.

So what, says the voice. I mean really.

All right then. How about this:

On Valentine's day morning, the voice in my head WOULD NOT SHUT UP and so I woke up at a quarter to five am with a spring in my bleary-eyed step.

In the sweetest of silence, under yellow light in the dark kitchen, I brewed some Italian coffee in my magic silver coffee triangles (haha, hipsters!) and got some writing done. Alone with my thoughts, until the sky began to pinken and the birds began to sing. Writing: one of the greatest joys bestowed to my particular soul.

I love it more than money.

More than whatever satisfaction one might find in visiting a bookstore and seeing their own book there on the shelf--a million times greater than that is the dizzying joy of creating the work itself.

No amount of measurable success will every make me as happy as a pen and a page beginning to curl with ink.

I woke up, this pre-dawn V-Day to three bunches of flowers on the table. (Mr. V had departed at four am, you see.) For each of the daughters there were roses and a heart-shaped box of candy. 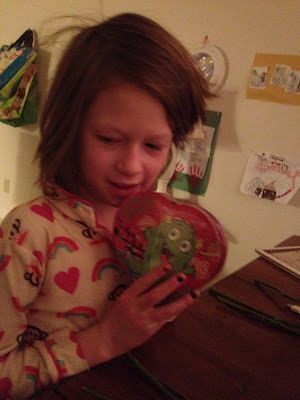 For the wife there were more roses, and a Bee Mine, and a bundle of money.

And next to the bundle, it was printed: For the Bees.

While the wife worried where she would get the money for the bees, the husband had been working extra shifts and saving money for that very thing.

Because I had woken so early and had a precious quiet hour to myself, I was a content mother. One who actually made heart-shaped pancakes for her daughters on Valentine's day.

Or tried to, anyway. (I wonder when we learn how to actually fake a smile rather than to simply stretch back our lips and bare our teeth it what might as well be a show of dominance, were it not for the stricken look in the eyes. I almost wish we never learned; except then I would spend a lot of time grimacing oddly at acquaintances I'm not actually all that fond of. Which might bruise some egos, but would also save me a lot of time.)

Later, at Target, browsing the toys with a sparkly gift card, Indy would sigh and offer me this gem: "Mom, I kind of want all of this, but I actually want none of it."

Such wisdom, my girl.

There, I say to the voice. There is all that happiness in my life. Plus, soon there will be bees.

And cake pops, reminds the voice. She is just so gentle, sometimes.

And cake pops, I agree.
Posted by Vesuvius At Home at 8:21 AM

Labels: the divine Hermione Grainger, The Divorce Goes Through On Monday