What We Don't Say 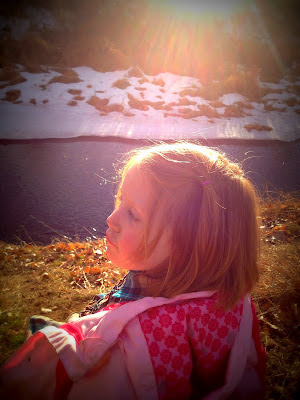 What I didn't say was that Monday, I woke up in a black mood.

There was no reason for the mood. I went to bed feeling fine and woke up with an absence of any feel-good hormones. I was unloading dishes in the kitchen, my entire body feeling heavy and my heart unwell, when Mr. V got home from the gym. "Why don't you go out," he said almost immediately. I nodded. My mood was so dark, I could barely speak.

This doesn't happen often, these days.

I wrote for awhile, came home, and took the girls to Chick-Fil-A. I felt marginally better, but by the time I'd returned from fast food and a very crowded grocery store, the mood had crept back in, unwelcome visitor in the tender places. Mr. V made dinner while I folded laundry in the bedroom with the door closed, the girls perfectly content to watch some early evening Totoro. It had been a good weekend. We'd all gone to see "The Secret World of Arrietty", the new one from Studio Ghibli, an outing we don't take very often. Then a fun party, followed by a good meal. A night's sleep.

A nervous voice in the back of my brain feared that here it was: a late arriving plummet into seasonal depression. I didn't listen to that fear. I knew from my previous experience that the only way was to wait it out. Not to nurture the darkness--not to feed the bad wolf--but not to deny or repress it either. Just to lean in. To let it be. To observe it like from a distance whenever possible. I made it through the day, quietly, avoiding unnecessary interaction. I managed to tell my husband that I wasn't mad at him, this mood wasn't his fault. I just am out of happy today, I said. I know, he replied. It's ok.

I sang Indy to sleep and put myself to bed. In the morning, it was gone.

Headed out the door to school drop off, I texted my husband. "Indy is in the worst mood of her entire life," I said. Indy is rarely grumpy, and the culprit is almost always lack of sleep. She resolves this by asking me to put her to bed, and I do. She wakes up refreshed, her good-natured, buoyant self. This morning, I'd told her to put on her shoes. She'd squared her shoulders at me and said "NNNNNNO." Oh Indy. Indy's fate is that she's stubborn so seldom, it becomes comical when she is. I handed her her pink jacket. She took it and threw it on the ground.

I turned away and laughed. Indy angry is like a fierce beautiful pixie. She presents no real threat, can do no real harm.

Ayla and I walk a delicate line together every morning.

My seven-year-old in her spirit is thirteen. Being asked to do something nicely annoys her. She drags her heels, not wanting to comply until the power of being told is worn off. She is reminded again. The reminder kicks her off the balance beam and lands her fully in outrage. If she has to be told a third time, things go irretrieveably down hill. She stomps, rolls her eyes, slams doors, calls names. Says, "I knnnoooooow," in her best teenage drawl. O-M-G. Whatever. You're ruining my life.

All have crossed her lips.

Of course it is difficult. I take deep breaths. I imagine white or my preferred caramel-colored light. I try to send her calm energy, try to keep calm myself. 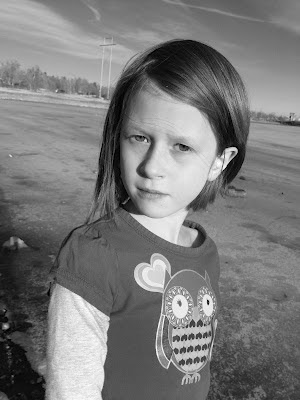 Driving the girls to school in the morning, I know that Ayla and I have the more difficult time because her moods hold up a mirror, reflect my own struggles back to me in harsh glinting blades. But in the strengthening February sunlight, I know that dealing with my black moods, the process of learning and struggling over time, is what has allowed me to become the person who can ride them out today. Ride them out without hurting others or sending hurtful thoughts at myself

I know that this angsty incarnation of Ayla has emerged early, the moods and anger and defiance rearing long before they were expected. But now, like waking up on a black day, I know there is another side. Sometimes Ayla seems a world-weary traveler, sent to show me how far I have to go. How easily my daughter can tug a thread and ravel me undone. I love this old soul that was sent to me. Who she is, and who she will become.

I know the person that emerges in the light is different from the one who first started out down that dark path, into the woods by chance or by choice. I know there are roads through the blackness and out. I know that I can tell her about them, but she'll have to find them for herself.

I trust the wisdom in this.

Ayla will become, like me, a person who knows that all things pass.

Over and over again, we will walk these roads.

Forever we will find the light. 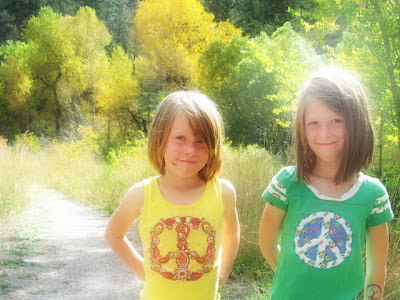 Labels: Come On Get Happy, It Turns Out I'm A Goddamn Hippie, Little Bird and Starbuck, Spring Eternal, the divine Hermione Grainger