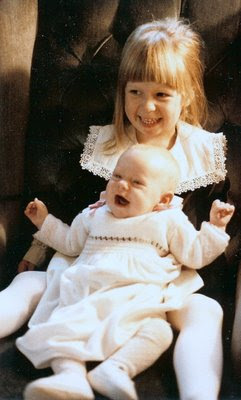 Exhibit A (1)
I was baptized on All Saint's Day or Reformation Sunday (depending who you ask) as an infant, in an Episcopalian church. My parents were not regular church-goers at the time.
Reformation day celebrates the day Luther challenged the Catholic church. The origins of All Saint's Day skew more Catholic than Protestant. It celebrates those who have attained a beatific vision of heaven--which isn't, really, very Lutheran--and originally was meant to celebrate the prayerful bond between those in heaven, those in purgatory, and those on earth. Decidedly un-Lutheran.
The Episcopalian church ordains women. I happen to believe that women should be ordained. My mother, last time I checked, does not.
Exhibit B (1)
When my mother was young, her own mother dropped her off in front of a church on Sundays, offering money in her hand. My mother would wait until my grandmother drove away, then walk in her church shoes to the drug store and spend the offering money on candy or at the soda fountain.
I like this story about my mother.
Exhibit C (1)
When I was a baby, my mother was approached by Jehovah's Witnesses. She was young and, I imagine, hungry for a spiritual tradition. My father, who had been raised Lutheran, called bullshit and they began attending a Lutheran church. I'm grateful for this, as I would have made a terrible Jehovah's Witness. It is far more difficult to be a bad Lutheran; I still don't know if I've accomplished it.

My father's people were Swedish and German and Lutheran by tradition.
Exhibit D (1)
Three years after me, my infant sister would be baptized in a Lutheran church. She identifies as Lutheran to this day.
Exhibit A (2)
By the time Ayla was born, I had left the Lutheran church and was dabbling briefly in non-denominational Protestantism at a very large church. Around the time Ayla was one, I stopped going to church altogether. To this day, I very much enjoy not going to church. My free Sunday mornings still feel like a gift. Like hitching up my petticoats to wade in a cool river.
I have developed other ways of nurturing my spirituality. Ways that fit my frequency. They are gentle and grateful. They scorn guilt. They focus on love.
Exhibit B (2)
Neither of my daughters have been baptized.
This was difficult for my mother.
Exhibit C (2)
"If you think God is a boy, he's a boy," says Indy. "If you think God is a girl, he's a girl. That's it." She shrugs. What's the big deal? "I think God wears lipstick," she adds. She tells me the most fantastic things. She wants to be Catholic but "daddy never lets her". (Not true). God lives in the stars but also in the flowers. God has a face like a tree but does not have blonde hair, just the picture has blonde hair.
"I think God is a boy," says Ayla.
Her world view has always skewed patriarchal.
It is possible I've given birth to a conservative.
Exhbit D (2)
Indy seems particularly spiritually inclined. She has a lot of questions and talks about her dual-gendered version of God often.
But both girls agree that church (their grandmother takes them on occasion) is boring.
Exhibit A (3)
I spend a lot of time wondering what things are passed to us through blood. Some things are easy: from my ancestors I've inherited fair skin, small eyes, a creative drive, a dramatic flair. But what about other things? What about the way I view the world, my ease in it, in my own skin, with others? My parents raised two daughters in one spiritual tradition. One left, the other stayed. It was painful for some members of my family. I know this.
Studies on identical twins suggest that our propensity to believe in a higher power has a genetic component. So do our political leanings.
Exhibit B (3)

I didn't leave the Lutheran church because it was a bad church. I left it because it wasn't right for me. My spirit craved a different tradition. It asked to be separated from the routine, the creeds and recitations and lessons I'd learned by rote, that I practiced without meaning or celebration or any earnest yearning for the Divine.

I think these very things that left me feeling dry and alienated from my spirit are the same things that bring others comfort and peace.

I believe there are an infinite number of ways to celebrate the infinite Divine and I believe in a Divine that smiles on all of them.
So then: which was in my blood--the Lutheran, or the leaving?

Labels: family first, Sophia, the divine Hermione Grainger, Things that I think are very incediary but maybe are not