A Story Of My Life

Until I was nearly eleven, I was sent to St. John's Lutheran church and school in Denver. The sanctuary had a high vaulted ceiling speckled with lights like stars which I would lay back and count during sermons. The narthex included a living-room sized coat closet, and I recall hiding among the coats, the furs soft against my face, and quiet, and whispering Narnia. Secret doors opened to a hidden passageway, stone-walled and spiraled, exactly like in a castle. There was a basement full of costumes and props, old Renaissance gowns and fake swords, and in the balcony was a marvelous pipe organ, hundreds of pipes arranged descending by height, all glittering and imposing and pleasing to my young eye, which liked order and magic and shine.
My classmates and I often passed between the school and the church, which were connected by a corridor. On the wall of the hallway we traveled was a sculpture, which was mysterious and frightening and commanded my attention every time I passed it. It was a simple wooden cross, with hundreds of nails pounded in to different degrees, so that the surface was not smooth but jagged. It looked like by running your hand across it, you could catch your skin and bleed.
The most arresting feature, however, was the at the top. Around the place where the head should have been, silver iron contorted into the shape of a headscarf. The scarf enshrouded not a face, but a pool of black. Many years later, when I would see the Lord of The Rings movie, the ring wraiths would look startlingly familiar to me and it would take me a moment to figure out why: their voided faces looked almost exactly like the sculpture.
Not long ago, my dad told me that this particular sculpture was the focus of some controversy among the church members. An unintended result, I'm sure, but for years, this strange black void with the hood obscuring its face was what I pictured when people said the word God.

Image by Joseph Easterbrook.
*****
I am writing at home today. I drove to Starbucks, but my unwanted companion was there. I know his car, noted it so I could avoid going in when he's there. He is there almost every day. He sits alone for hours and watches people, occasionally attempting to strike up conversation. He doesn't read. He sets a large digital clock on the table, it has the temperature displayed on it, and he watches that. He is a misfit. I know this sad. Sometimes I feel I ought to indulge him, make conversation back. Occasionally I have. I feel I should develop compassion for this man. The sight of his car makes me angry. He makes me feel self-conscious, noted. When the morning rush clears, he and I are there alone. I prefer anonymity. I wish to be unknown.
He makes me uncomfortable. Sometimes I feel him watching me.
*****
I collect images of the Virgin of Guadalupe. I have her on rings, necklaces, pink candles from Wal-Mart. I love the looks of her. Her brown face, her blue or green robe with all its glittering stars. For me she represents not a human woman, but a female face of divinity. I love that she is likely an incarnation of the Corn Mother, or the Aztec Tonantzin, which speaks to the fact that across the ages, nearly every culture has recognized a divine presence and has bestowed upon one thing many names. As I got older, I chose to stop believing some of the things I'd been taught and one of the things I abandoned was the idea of an exclusively male god. I choose to believe in feminine images of the divine, and I love seeing her as depicted in the images of Guadalupe: infinitely loving, deeply compassionate, present in the earth and stars, maternal and divine. 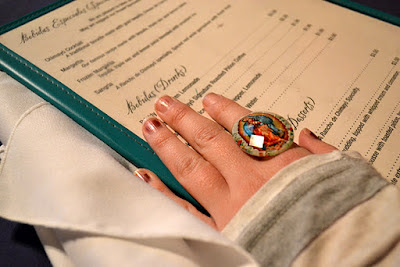 **I was inspired this week by this post by Elizabeth at the lovely a moon, worn as if it had been a shell, on Our Lady of the Dry Tree**
Posted by Vesuvius At Home at 10:54 AM

Labels: Sophia, the divine Hermione Grainger, Things that I think are very incediary but maybe are not, You Know You Were Raised Lutheran When