Saturday Edition: Notes From The Hive

Last weekend it was time to check the bees and make sure Queen Carnie was laying eggs. If she wasn't, I would have had to replace her. Otherwise, when the summer Italians start to die off in a few short weeks (about three, I think), there would be no new bees to replace them and keep the colony alive.

I was nervous going in. Not afraid of the bees, but afraid of hurting them. I was especially afraid of making a clumsy new beekeeper mistake and committing regicide. It seems that I tend to screw up my face just the slightest bit when I'm intent on something? No wonder people always seem afraid of me at Starbucks. But don't worry about me, when Mr. V repeated for the seventh time, "Britt, stop making that FACE," I thought it was cute. I swear to god, isn't that what every woman yearns to hear? Honey, I love you. Just try to look more. . . human. 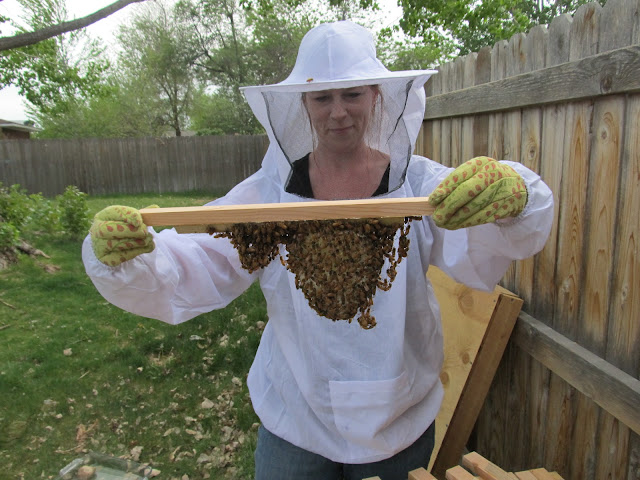 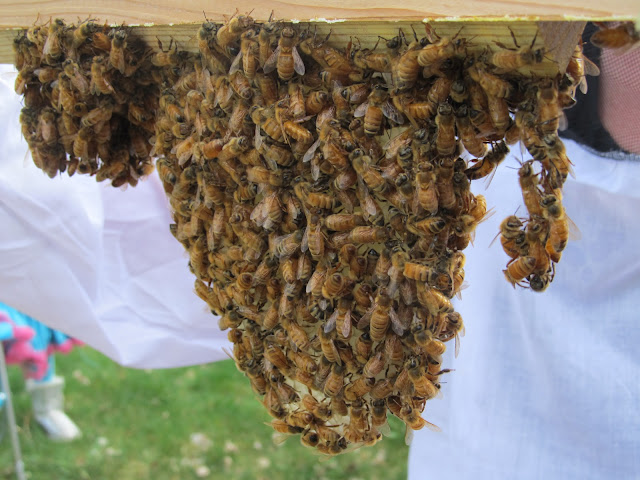 Here they are on another bar that was almost full. Mr. V had no protective gear on and was unafraid. The bees couldn't have cared less that we arrived uninvited and started snapping pictures of their home. They just went on doing their thing while I composed sonnets and got maudlin over their beauty. 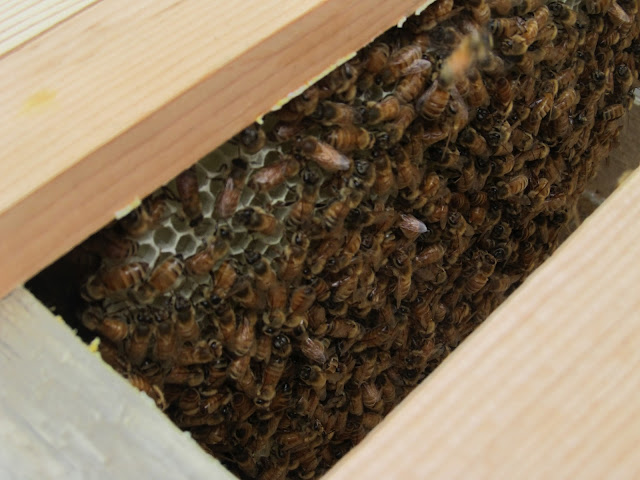 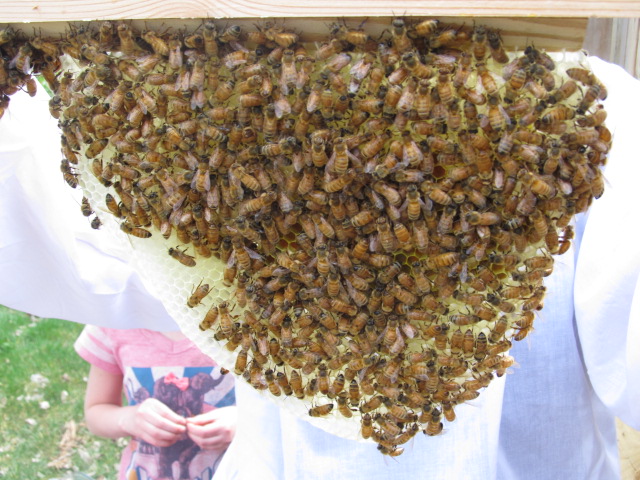 I was too damn amateur to notice it at the time, but this bar here is filled almost entirely with honey. The darker cluster there in the middle is the bee bread. 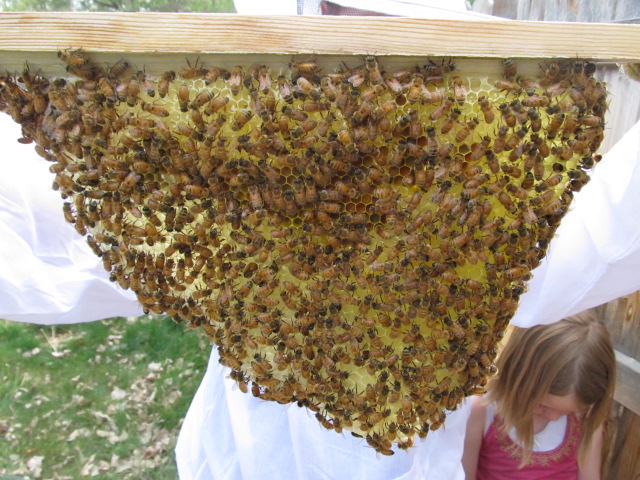 I don't really want to tell you this, but since it might help other beekeepers, I will. We had a minor emergency. We found Queen Carnie on the last bar I looked at, which was the bar closest to the entrance. When I was holding up the bar something felt off about the balance, like the bees had built this comb differently. We held it up for about a minute, watching Carnie to see if she'd lay an egg for us. Then the comb just dropped off. It fell right off the bar and onto the ground. I said words. I said many words quickly and in a row and basically sounded like I was being arrested on COPS. Quickly Mr. V got a cup--I couldn't pick up bees because I'd picked up the comb, which had crumpled in my hand and left sticky honey all over my gloves--and Carnie walked right in, all imperial and pissed. She scolded us good with that stately walk. We put the cup in the hive and Carnie marched right out and back to the comb. I felt terrible. There was bee bread and some larva and honey in the comb and nothing I could do to save it. I don't know what I could have done differently other than replaced the bar the moment I noticed it was weighted unevenly. It's possible it would have fallen off anyway, into the hive. I don't know. I felt terrible. But the bees moved on. 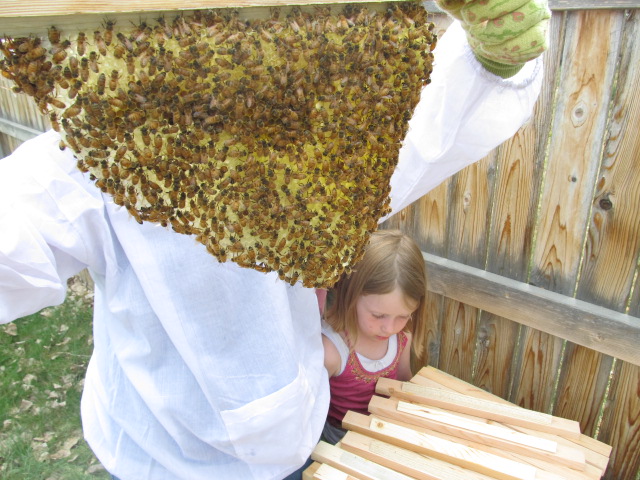 Ok Mr.V, here is my best attempt at stop making that face. 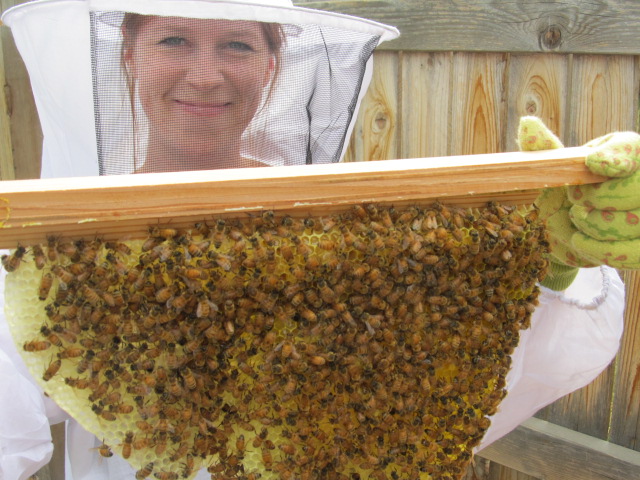 Towards the end the bees started doing this weird thing. I don't know, I worry they may be hanging out with some neighborhood riff-raff and are learning unsavory behavior. Several bees landed on the entrance, stuck their butts up in the air (shameless!), and began to beat their wings so rapidly they could only be seen in a blur. It made a loud buzz. I don't know what they were up to and I was too busy trying to get ready for my glamour shots to care. 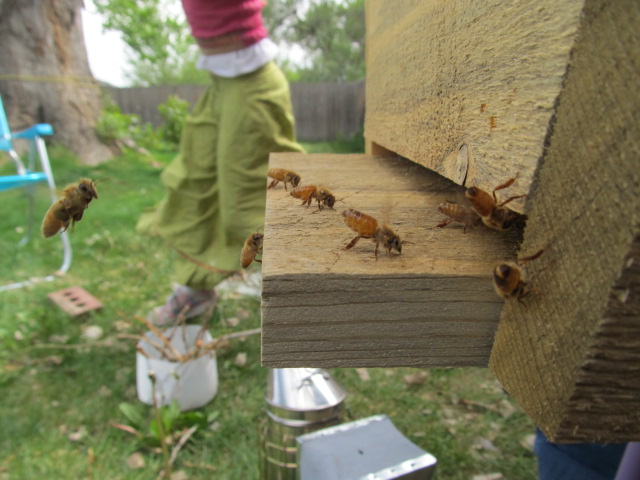 Today I had sort of a panic. I was giving the girls some syrup when I noticed there were far fewer bees on each comb. I worried that Carnie had swarmed, meaning she and most of the hive decided they'd had enough of this fish-bowl life with the damn paparazzi showing up every weekend and decided to go find some cooler digs, something maybe with hard wood floors or a mountain view. So I went in to look for my queen. I didn't find her the first time I went through all the bars and thought I had a kingdom without a ruler. Then I went through each bar again and found her, laying away. I'm hoping I noticed fewer bees because 1) There are more bars of comb now for them to cover, and 2) more bees are out foraging, since they're getting older. Bees forage in the last 1-3 weeks of their lives and work themselves literally to death. I had a few very old bees on my comb, they look like little old ladies, their yellow turned to white with old age. I also had a few dark bees that I first thought were oldies, but now I wonder if they're my baby Carnies? I'm too new at this to know for sure and also all I really cared about was my lip gloss, which had smudged and how the hell was I going to touch it up through my veil? 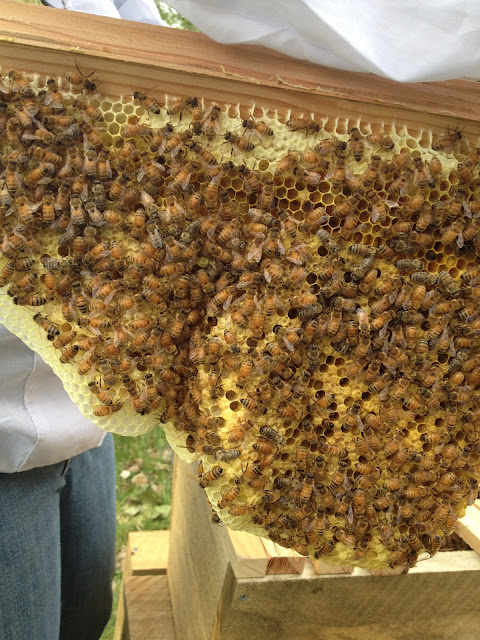 What you're seeing here is a lot of capped brood and if you look closely you can see some black bees mixed in with my yellows. I'm gonna miss these Italians when they're gone. I'm hoping to keep an Italian colony next year, when I'm an expert at all this.

That's what's new with the bees. Before we go, I'd like to address those of you who seemed to think having Tina Fey put her hand through my mail slot and wave it around is a funny joke: Tina Fey putting her hand through your mail slot is very real, and those of us dealing with it (me) need your support and not your judgement. Just think how you would feel. You could try and tape the slot shut but Tina's wily. She'll cut through it.

Love from the hive,
B

One more thing: My sister's fun friends, Jan and Kellee, and their husbands came up to Mr. V's brewery and my own Mr. V gave them a tour. Jan takes great pictures and is fit to be a blogger, unlike yours truly. She's funny too, but before you give her too much credit, just remember: she doesn't have to deal with Fey. Here's her fun post about Mr. V's place of employment, where he rides skateboards and drinks beer with all the other hipsters, all the live-long day. I swear. (Mr. V is in the black tee with the green "Old Chub" splooge on it. Is that a dirty word? I didn't mean it that way.
Posted by Vesuvius At Home at 5:11 PM