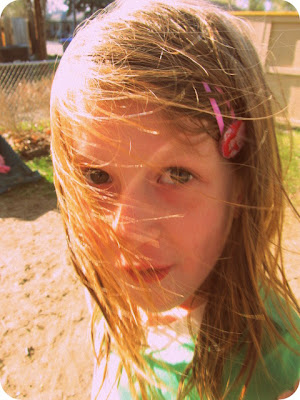 Yesterday my sister called me to say a swarm of bees had arrived in her lilac bush and two hours later, she had hived that swarm.

I spent a good portion of today defending my own hive like a toothless man on a front porch, a spray bottle of syrup in one hand and a broom in the other, slaying yellow jackets and ants while dark thunderclouds approached from the west, the wind thick with the sweet scent of early summer. I have made myself a bee vigilante, and it will drive me crazy if I let it. I could, theoretically, sit there for ten hours a day, defending the hive.

At some point, I have to trust the bees.

The post I wrote yesterday rattled around in my brain all afternoon and evening. I went in to it intending to do one thing, and by the end of it I think I'd done another. I was unsettled and bothered, (but not in a good way). The line between sharing a story in a helpful way, and sharing it in an indulgent way, is a thin one and I'm still learning to walk it. I'll mess up, sometimes. I hope you'll know my intentions are good.

I tried to banish my bothers from my brain as I sang Indy to sleep, leaving off the last word of every line of "Sweet Baby James", which we sing "Sweet Baby Indy", and allowing her to fill it in. In Indy's version, the cowgirl thinks about "horseys" and glasses of beer, and closes her eyes as the doggies "are tired". (Ayla's version involves a young zombie who likes to eat brains, and begs the listener "please just don't eat baby James"). When I was finished, she put her hands on my cheeks and smashed her lips to mine in a full, lusty kiss. Indy, I said, when she pulled away. You haven't done that in a few years. You used to do that all the time. I spent the next five minutes being kissed in such manner by Indy and then Ayla. I'll tell you here, but don't repeat it: Indy is the better kisser.

The bees are beginning to die off and being replaced by the second generation. All this work they do, not for themselves, but for future generations of bees to survive a winter and into a spring they won't live to see. If I wanted to, I could get morose about the bees. But I've decided not to. The bees do as they were born to, and so must I.

Two weeks ago I wrote in my journal: I must learn to approach writing like the bees--not go into it until absolutely necessary, then work without all this worry, or desperation, or wondering why.

Labels: C'est La Vie, Come On Get Happy, keep the bees, Little Bird and Starbuck, Sorry I Made You Think I Was Going to Kill Myself, Vesuvius and the Terrible Itch