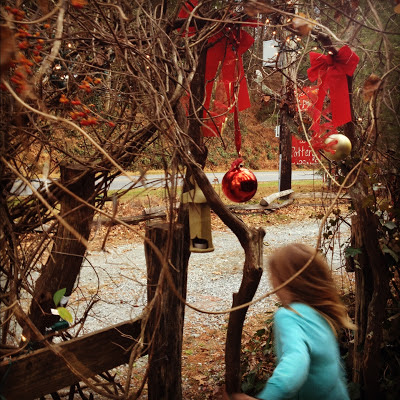 Yesterday Noah worked twelve hours and I put the girls in the car and drove over the mountain and through the woods to Trader Joe's in Greenville, SC. It was a warm day, humid from the previous night's rain. A gas station in Greenville County had an ostrich, or an emu, in a large pen in the back and the girls watched it from the car while I went inside to buy them cokes and orange crackers with peanut butter inside, a snack I have been obsessed with ever since Temple procured some for her drive through post-apocalyptic Florida in the gorgeous Southern Zombie Gothic, The Reapers are The Angels--a book I wish I had written but of course, could not have, not being Southern nor ever having read much Southern Gothic beyond an Anne Rice phase at thirteen, when I would lie awake on summer evenings until one am or later, absorbed in the lives of the Mayfair witches. Greenville County is also where the devastating "Bastard Out Of Carolina" by Dorothy Allison is set, a book I read recently and was broken by, so there you have it. I bet you never would have guessed a drive through backwoods South Carolina could be so literary.

The end-of-times crackers were fitting, as South Carolina on a Sunday morning was apocalyptically quiet, everyone tucked away at church and the streets empty, the hardware stores and grocery outlets and even coffee houses closed. (The one bizarre exception was a cotton candy truck blazing carnival lights from an empty parking lot). We turned off our French carols as we wound out of the hills and put on Edward Sharpe & The Magnetic Zeros, all three of us singing along. The girls are learning rhythm and I spend a lot of time, these days, slapping one palm against my thigh in beat while driving down country roads.

I am feeling unbothered by Christmas. Removed from the shopping frenzy, which I hate. It's easy here, with no mall in sight, nary even a Cost Plus or Target. Over the course of the last few Christmases I have tried to remove myself, gradually, from the things I dislike about the Christmas season and toward more of the things I love. For me this means little to no time shopping and a shortened personal wishlist--which is, I admit, still a bit tricky for me--and more peaceful time with my daughters. So we drove to Trader Joe's and bought gingerbread house kits, which sent the girls into raptures of delight. The day before we had walked with our friends two doors down, to the house where a 92-year-old-man lives with Christmas trees sprouting up in his backyard and kindly allows folks to come cut them down and drag them home. Noah was at work, so our friends sawed down the tree for me and carried it up the hill, forced its considerable girth through my door. We propped it up and it fell down three times, once on Indy, who caught it and who insisted she wasn't brave, even though she stood there bearing up this giant tree-hemoth with one tiny little arm while her older sister cried in fetal position on the floor (no exaggeration) until I could rush from the bathroom to help her. Except for one bad moment when I realized I'd spent too much money on champagne and coffee, I have felt remarkably zen. This week I will clean the house and maybe string some lights. This weekend we will bake cookies and make ornaments together, the girls and I and maybe, just maybe, their father. Last night, after spending the day singing and drinking Coke and making gingerbread houses, Indy was rapturously happy as she was tucked into bed. She snuggled between me and her father, her face beaming, smiling so dopily we would later joke that perhaps she was high. "Did you have a good day?" Noah asked her and she nodded, beaming. We kissed her goodnight and went out to sit by treehemoth and the fire. Tension is running high with Noah's job keeping him away from home for twelve hours or more, the last seven days. He worked straight through the weekend and was back at work early Monday morning. Earlier we'd fought, a little bit, mostly from stress but now we sat by the fire and I thought, no matter what, today Indy is happy, and Ayla is happy,  my tree is fat and, what a luxury, my larder is stocked with coffee and champagne. 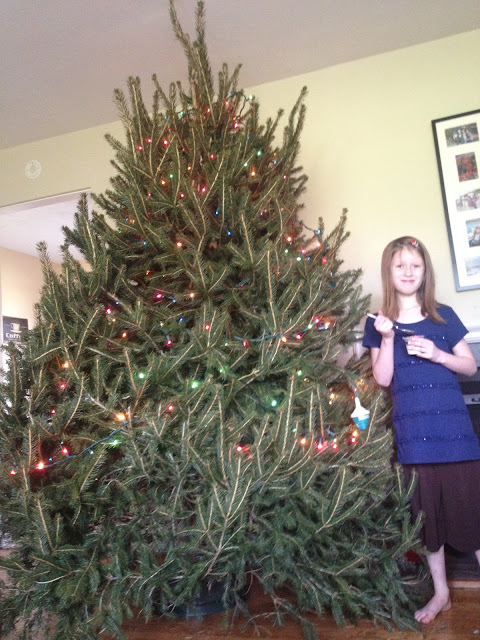 Posted by Vesuvius At Home at 9:40 AM