One of the themes of my book, Angel Food, is my belief that if the apocalypse were, at fact, at hand, nobody would pay much attention to it, considering. That's not what the book is about, exactly, but I tried to weave it in on the sly. How successful I was at that, I don't know. I have long been a lover of post-apocalyptic and utopian tales, and I wanted to write one but didn't, because I feel they've all been written. I was struck by something once said by that pillar of wisdom, Lady Gaga. She said that the apocalypse had already happened, and we're all okay. Angel Food has, if you will, an apocalyptic backdrop, which is how I feel we're living our lives now.

Last night I expressed myself best on twitter with the following tweets: 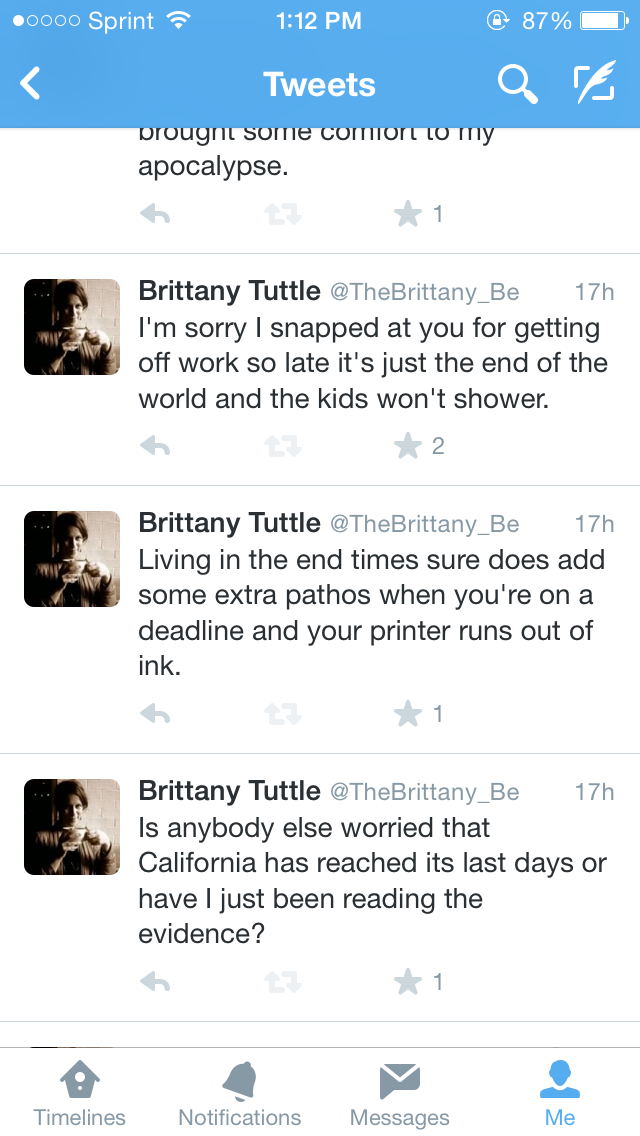 I read an article back in December that scared the shit out of me and has haunted me ever since. It was from a reputable source, about climate change and what might happen. What happened last night is that while I was preoccupied with thoughts of armageddon, I needed to print documents for the girls to attend camp and the printer was out of ink. Noah was in Asheville and couldn't help. I went to the neighbor's to print these permission forms so that my daughters can go to camp while California is already burning and it's only May. We ate Chinese chicken salad that turned out really well, and I thought about the ice caps and the rising seas. I felt that it would be okay for the world to end if only I didn't have children. I can handle the end of all things, but I don't want my children to have to handle it. This in mind, I made myself a Wednesday night vodka, something I never allow myself on weeknights, and then proceeded to be kind of a dick via texts with a friend. I wasn't a dick to my friend, I was a dick about something else, as I usually am when drinking vodka. I wondered how to proceed if the world is really on its last gasp as the girls brushed their teeth and spit chemicals down the drains. I took an extra long time putting them down. I had more patience for their stories, and we sang silly songs and snuggled, because hanging over me was the very real sense that we might not have too long.

I've been wondering if it's worth trying to write another book when the eastern seaboard might be underwater before the book is finished. I am perhaps prone to thoughts like these; I remember in the 4th grade becoming constipated with concerned that Jesus might come again before I received my Babysitter's Club Calendar through Scholastic book orders. (He didn't, I got the calendar, it was magnificent). I decided that if these are the last days, I should do whatever the hell I want, and what I want to do is to write, regardless of whether or not I'm able to meet the deadline for the second coming. Then Indy woke up with a terrible headache that had her pacing the house in circles and moaning in pain. When your child has a headache like that you realize there are an infinity of ways for the world to end. Noah was still out. I called him and called him. I gave Indy an Advil and she threw up. She seemed to feel better right afterwards and put herself straight back to bed. An almighty crack and the great flood opened up from the sky. I sat in the window and watched how the storm would, every few seconds, light the world as day. As a child I was told Jesus would return by descent from the clouds to the sound of trumpets. I heard no trumpets. Noah pulled into the driveway and ran to the door. I watched by lightning. "I had to drive home with the window down and my head sticking out because the windows wouldn't defog," he said. I was angry at him. He and I are still very much in love. I must not have heard anything he told me because when I reached out to touch his stomach in the dark I was surprised to find he was soaking wet.
Posted by Vesuvius At Home at 1:39 PM