Deep In The Evening 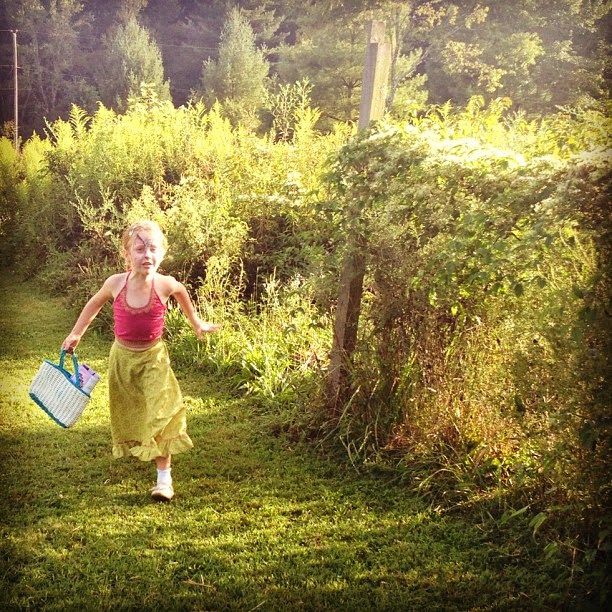 I will never know what it is to grow up in these mountains. So often I feel socially out of sync, like the world is going on at one speed but my sound is lagging a second behind. I have missed fiercely the scent of Colorado's Russian olives in June, a scent so lovely it brings me close to tears. Last spring I hoped for a similar scent in Carolina but couldn't find one. I gave up that particular pleasure as lost. Yesterday I drove Indy to Girl Scout camp. The world was green and speckled with sun. It shot through the trees and across the fields in long fingers, except in the deep dells, where the dim was green and like the jungle. The curve in the country road revealed a riot of flowers in every ridiculous color. I grew up under a high desert sun. I was raised in violent light. I will never know what it means to grow up here.

Deep into the evening, far past Ayla's bedtime, I remembered an invitation to drive out to Rosman to see the blue ghosts. I hurried Ayla into the car, because the ghosts are rare and their window short. She was nervous riding next to me through the dark. I don't know what I have done to incite their doubt in me, but I pride myself on knowing directions and my daughters always fear I've lost my way. There were no street lights on these unfamiliar roads. We had to pull a u-turn and double back a time or two, but finally we turned off the two-lane and onto a dirt road in the country. I drove slowly until my headlights found the right wooden sign, with the name of the property--all the properties here have names--and we parked on a gravel driveway.

We stepped out of the car and into the stars.

"I can't see," Ayla whined, nervous in the dark. I told her to follow my voice. I couldn't move, I was rooted in place by blue fire flies, floating across the forest floor to the rhythms of curling fog.  The blackness was thick. Ayla found my hand and we gazed into the forest. I let my eyes forget their sense of depth and felt dizzy. It seemed that outer space was waiting just before me, or that I was drifting through it. The pulse of the blue ghost firefly is long. Hundreds of stars moved unhurried above the sleeping undergrowth. You can search the internet, but none of the pictures come close to representing the way they appeared to our eyes. We walked this fairy realm in silence until Ayla finally said, "I feel like I'm in heaven."

That was last night. Today I was laying in my bed, reading a book. A breeze came in through the window and I gasped in delight. Not Russian olives, but something just as dizzyingly sweet. I tried to place the scent--lilac? rose?--and heard myself say, "It smells like June." What I meant was that it smelled so close to the way that happiness did, when I was growing up.

Two years ago today we came to Brevard for the first time.

Posted by Vesuvius At Home at 9:39 PM