The Outlawed Dance: 36 Hours In Charleston

Perhaps you think photo essays comprised of text placed obnoxiously over manipulated images are the lamest. 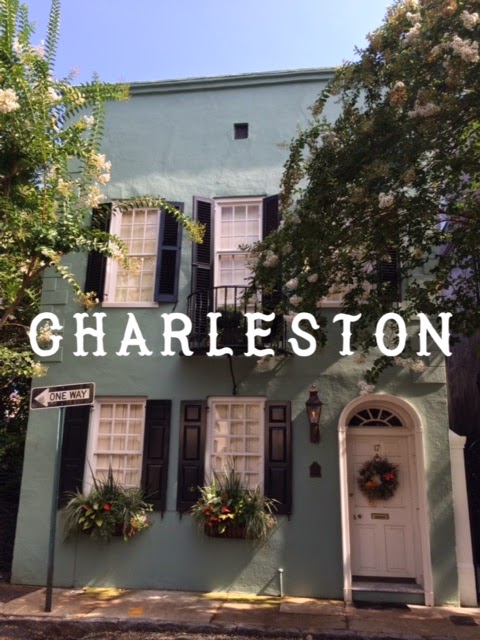 The girls are in Colorado with their Grammy and Aunties, so Noah and I had time for a trip to Charleston. During the four hour drive, we listened to a playlist I had made the night before and that turned out to be surprisingly bittersweet. As a result, I felt like crying (to a Journey song or Springsteen) most of the way to Charleston.

A sign as you approach from the north bids you "WELCOME TO CHARLESTON" and then "ALL AMERICA CITY". Not All American but All America. This would haunt me over the next 24 hours. Are they commanding all of America to city? Or are they telling City that it's not just some of America, but all? You see why I didn't sleep well. 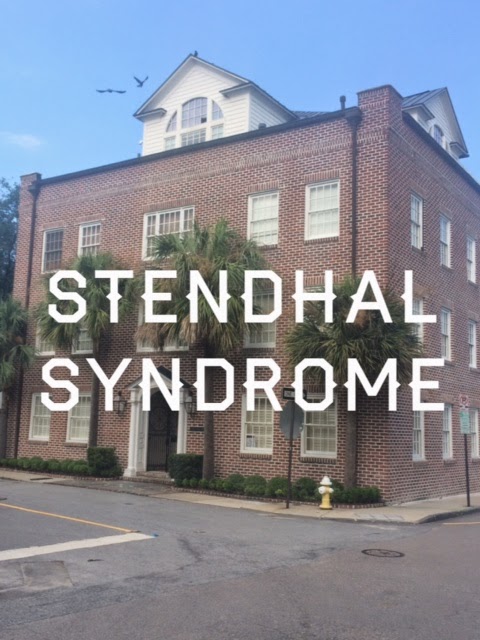 After a quick meal at a shit restaurant that somebody recommended to us, we drove around the historic district, the French Quarter and the Battery. I could barely breathe, it was so beautiful. I drove myself crazy acting exactly like my mother, rhapsodizing again and again at the beauty of the place, but the humidity, but the beauty. None of my pictures do any justice to the feeling of being there, all the history, the houses pressed tight each to each on cobblestoned streets. They did sing to me. I could almost feel time become relative and slip away, all the ghosts of the city's past bustling around us, just out of sight.

As for the restaurant, I had ruled it out after doing my own research. But then there it was, recommended. Try the she-crab soup, said yelp reviewers. Their mouths were watering just thinking about it, they said. Well we tried it, and we would like to bet money that the base is Campbell's Condensed Cheese soup. Sure there was crab in it (and a good bit of hard shell), but you could ruin anything by putting it in condensed cheese. Even the waiter knew it was shit. "Was everything okay?" he said as he took away half-eaten plates, unable to meet our eyes. 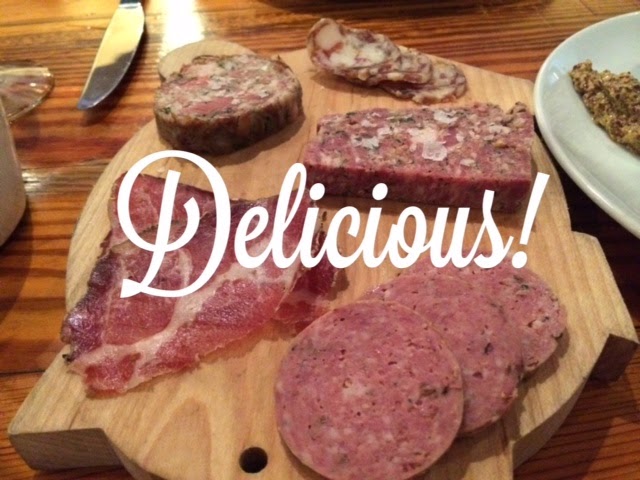 We did much better later, though. A silent cabdriver of vaguely Slavic origin drove us down to The Grocery off King Street. I had picked this place after reading menu after menu. Charleston's hottest places seem to be Husk and Fig, but I'm never in a hurry to visit places that are charging $30 for the same old steak, currently hip fish, and roasted quail. I'm also not a huge fan of southern food, so when a restaurant has yet again deconstructed shrimp and grits or chicken and biscuits, it's not my thing. The Grocery was a little more adventurous with its offerings, and it paid off.  The true highlight was the Piggy Plate. House-made charcuterie with toast and mustard and pickled veggies on the side. The stuff on the upper left was so incredibly flavorful I had to shut my eyes to experience it fully. I haven't had to do that since we ate at Jennifer Jasinski's Rioja in Denver, or not often since then, at least. "Tastes like Christmas," I said, and Noah, with his brewer's palate, separated from the salt and the fat the delicate flavor of cinnamon, aged, which was lending the festive flavors. The fat on the very top offering melted away on my tongue. We were in heaven. The other two hits here were the Wagyu tartare and the bone marrow brulee, two separate dishes which we ate TOGETHER and they married into a perfect union in our mouths and are probably honeymooning right now in our bellies.

(The fried oysters, which the server recommended, were less memorable but I mean, we should have known. It was fried oysters.) (I didn't sleep well that night because I was worried about the Slavic cabdriver. What if he hates his life and does he miss his family and did he hate us? I tossed and turned.) 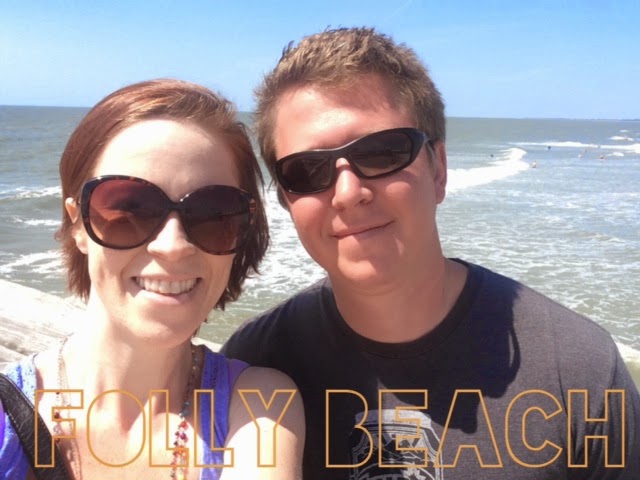 We drove out to Folly Beach where I got 1) a sunburn and 2) rather emotional about being a Colorado girl who has set foot in the Pacific and the Atlantic ocean, not to mention the Gulf of Mexico and the Irish Sea. I adore the ocean.

Lunch in Folly was a second flub. We trusted Yelp, which I will never, ever do again. The Lost Dog Cafe was perhaps the most recommended restaurant around, with people saying things like "forget best brunch in town, this is the best brunch EVER". Well it wasn't. It was gross. I didn't finish. Next time we'll try Taco Boy instead. Noah kept calling it Taco Mac, which really would be a better name. 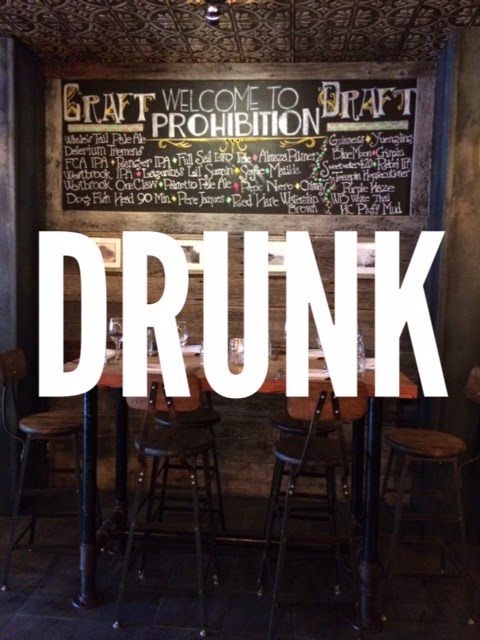 We found Prohibition on King Street while waiting for our Grocery dinner reservation. They were serving up really yummy cocktails by a very friendly bar staff. Noah had the Bacon Maple Old Fashioned (self explanatory) and I had the Strawberry Smash, which was Maker's Mark, fresh strawberries, mint, and lemon. 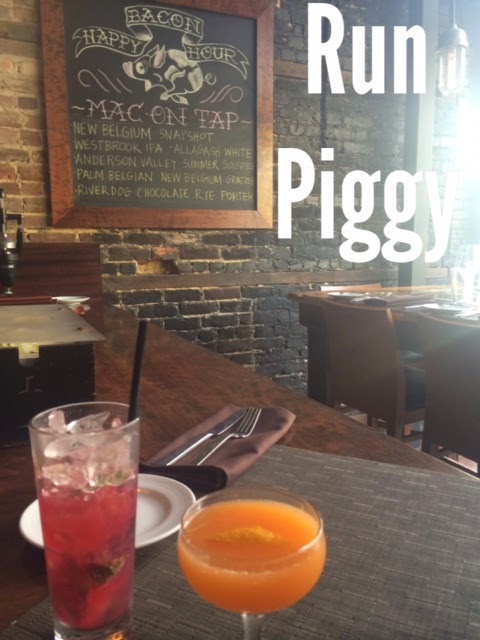 One thing that sucks about living in Brevard is that North Carolina has a ban on happiness. Oops I mean Happy Hour. Happy Hour is not allowed here, and I felt a bit like the prodigal daughter reuniting with it wholeheartedly in Charleston. This was at a place called The Macintosh, where Noah made terrible fun of me for walking in and saying to the hostess, "Do you have bacon happy hour?" I had read they did, but I wanted to be sure--I didn't want any bacon shenanigans. When I asked what had been wrong with my query, Noah informed me (good-naturedly) that "you just don't say things like that." I still don't understand what was wrong with it, but Noah teased me like this: "Hello fellow human, I am here to inquire about your pork and fermented offerings." Noah likes to say that I was meant to be a queen, or at least an aristocrat, and a hermetic one at that. Well, he is right. I have to agree with him there.

The Macintosh was another trendy place of $30 roasted quails, and I'm glad we didn't eat a full meal there, based on the soggy pork they served at bacon happy hour. (Yes. They had it.) 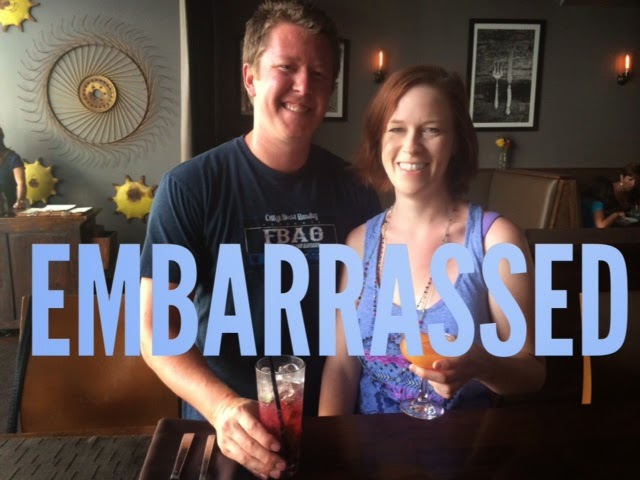 This picture was taken by an incredibly attractive barkeep right after I had asked DO YOU HAVE BACON HAPPY HOUR. She was wearing a collared shirt, red-and-white striped, tucked in to jeans with suspenders. It was really working for her. The barboy was cute too, but he wasn't waiting on us. She was blonde and friendly, and super hot. In the end, I will never truly be comfortable with things like eyeliner or my face, but this woman had aced the feminine arts. An absolute master. We were practically two different species. Noah said she wasn't his type (he likes redheads AHEM). I liked her and might have been her friend after I got used to looking at her face. Anyway, I asked her to take a picture, and she snapped a few. I was so self-conscious. Never before have I been so aware that I have a face. Also arms. And teeth. Oh my god. I can't even think about teeth. 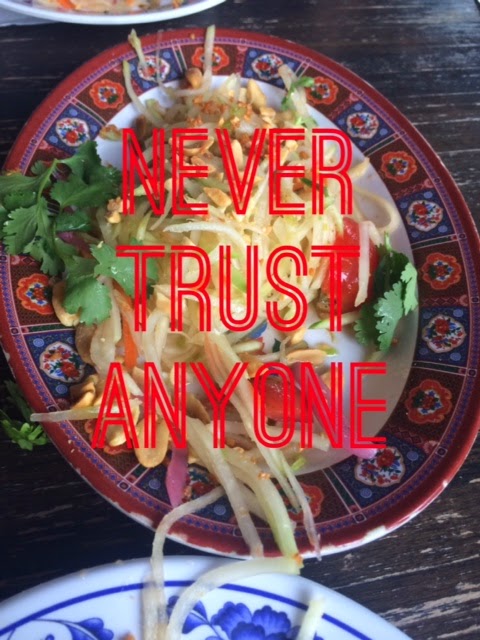 Our last meal was at Xiao Bao Biscuit. It must be said that of all the people suggesting one restaurant or another, NOBODY suggested Xiao Bao and this is why NOBODY can be trusted. Xiao Bao is the can't miss place if you come to Charleston. They've converted it from an old gas station, which is super hipster I know, but the environment is laid back and inviting. The server was a Nordic God, male variety, with roasted caramel skin and a nearly white stallion tail. We started out with the Spicy Green Papaya salad, pictured above. Fresh, crunchy, spicy, tart. Delicious. Then we had this little number. 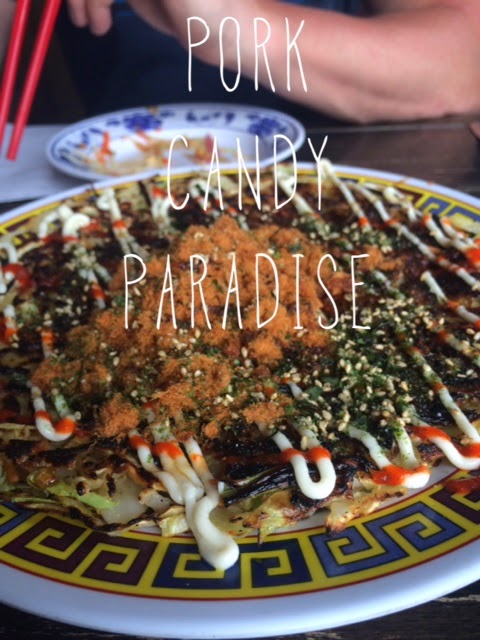 Okonomiyaki, otherwise known as "what you like" cabbage pancake. We ordered ours with Japanese pork candy on top. It was exactly like what you would imagine bacon cotton candy to be. Not bacon flavored cotton candy, but if you could make cotton candy out of bacon. I need to stop using those words. It was just delightful, different, incredibly flavorful. We were in heaven. Our last dish was the crispy duck, which Noah must always have. His Babi used to make it. It wasn't a jaw-dropper, but it was far better than most of the other places we've had crispy duck. 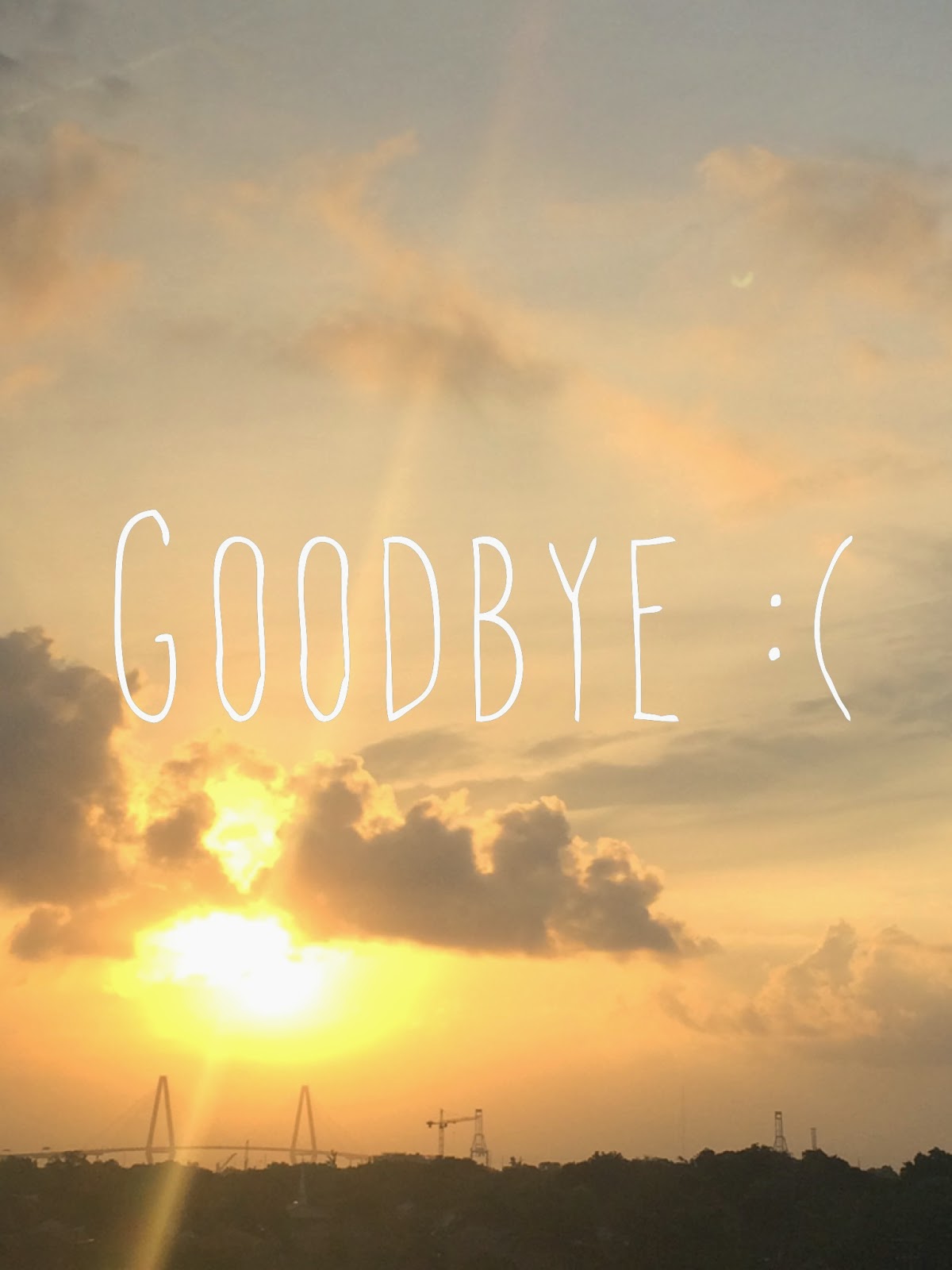 After another sleepless night (I'd accidentally watched Say Yes To The Dress and was troubled with thoughts of humanity being an invasive species, an evolutionary accident, haunted by the answerless question of the meaning of our short and brutal existence) it was time to say goodbye to Charleston. It was really hard to leave, knowing I might not see the sun again for weeks. It was hard to leave happy hour and the city. It was hard to pay $16 for a drip coffee, a latte, and a muffin at the Marriott Starbucks. Will I ever go back? I certainly hope so. Driving away, I thought about Charleston, a charming city that yet lacked a distinctive vibe. Maybe the vibe was shot away by the British, torn down by the hurricanes, trampled out by tourists. I decided it was hidden behind all those shuttered windows on the historic homes, curtains drawn against the eyes of travelers, the snap of iphone cameras. The poor neighborhood in stark contrast to the wealthy, ignored by happy hour seekers such as ourselves. The city full of its native women but fewer men, the stunning barkeeps, the Slavic cabdrivers. I decided Charleston's vibe was secrets. Like everything, the time was short, but I'm glad I went.
Posted by Vesuvius At Home at 1:30 PM