I Crawl Out of The Internetless Hole

I feel like I might as well start with "Chapter One I am born . . ." because I'll tell you, living without the world wide web for two weeks and then getting it back feels like a rebirth, most definitely.

Everything is going swimmingly except for a minor blip when we had to drive to Boulder to procure mussels. (We only procure mussels from Whole Foods because they go through them by hand, one by one, and put them on ice. King Soopers just tosses them all in a bag, sandy and sound alike, and charges you for two pounds when you really only get about a pound and a half of good ones. And then they just wrap them up in paper. And mussels? I'm not sure but I think they're alive when you buy them. And they should be on ice. Any old Rick Bayless will tell you that)

At first I laughed when someone told me a house we were looking at was 'in a rough neighborhood'. It's Longmont. It's a small town. How could any of it be dodgy?

Now I see that almost all of it is dodgy. Thanks to the crime blotter in the weekly paper, I am currently living under the impression that there is more drug activity on my block than there is in all of Denver put together.

The neighborhood we moved to looks like Washington Park would if a bunch of working class people moved into it instead of a bunch of yuppies. Cool old homes. Big yards. Navajo blankets in the windows and swamp coolers dangling out the eaves like butt cheeks over tight jeans.

I think people are getting the impression that I'm calling my house as a crummy little shack so that I might fool them. They imagine they will drive up to my gorgeous new home with the beautiful landscaping and uncrooked blinds and their jaws will drop and I will laugh at them until I cry.

I assure you this is not so.

For evidence, I give you this: 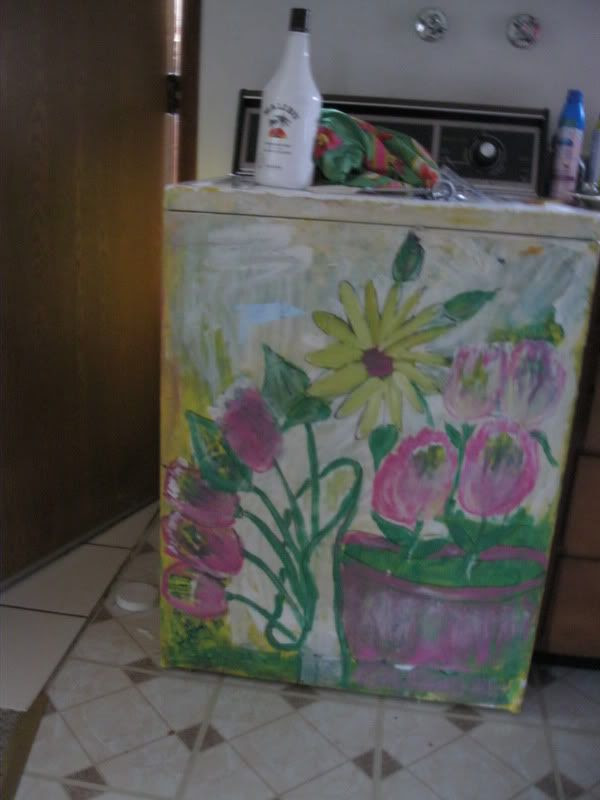 That is our washing machine. It is charmingly placed in the center of our kitchen. Our home is basically one room, a living room that runs into the kitchen. That means this little beauty is the focal point of the homestead. (You can see why we needed the rum).

But it doesn't matter. Having my own refrigerator after all this time is nothing short of a miracle.

The vegetables that fit in the crisper drawers. The condiments arranged neatly in the door and not falling all over one another. The lack of the stinkies. The stuffed graped leaves and fancy mozzarella and sparkling lemon water proudly on display.

Oh, don't get me started.

We were driving to Boulder to procure our mussels. I thought how much I'd rather live in Boulder than in Longmont, which lacks both the comforts of a big city and the charms of a small town. Then I thought, I don't want to live in Boulder. The people are snooty and concerned with doing everything the right way, with appearances.

Then I realized, I am kind of like that.

We got to the Whole Foods on 28th Street and saw more beautiful people in a ten minute trip than we've seen in two entire weeks in Longmont. (No offense Longmont. Its just. . . well as Mr. V said. Boulder is the Hollywood of Colorado. You can't expect the Scranton to keep up.)

We could see the lovely Flat Irons and the city had its vibe. You know the one. The vibe of hipness and culture. The taste of education and prosperity thick as incense in the air.

I like the vibe, ok? Knock Boulder all you want. You know you'd move there if you could afford it.

I wanted their goat cheese and prosperity pizza. Smug basil on the side. But I didn't get any. I sulked all the way home. I admitted I want to be rich and famous and shop at Whole Foods. At the same time I hate the whole thing--the constant gathering of more hip stuff, the worrying over the brands, and the appearances, the snobbery, the quiet but palpable flaunting of the wealth--

I want to be rich, but without all that. Without the greed and the consumerism and the grandly misplaced values and priorities. I want all the comforts of wealth. Doesn't everybody want to be rich? Aren't we just collectively not admitting it? Tell me if I'm wrong.

I want the opulence without the ignorance, it's true. But mostly I want the chance to laugh at you when one day you drive up and stare in awe at my million dollar house that I will have described to you as a crappy little shack.

And when you get a glimpse of my cheesy naked man fountains?

Joke's on you. Wearing my silk dressing gown, I will laugh until I cry.

Until then, darlings.
Posted by Vesuvius At Home at 9:24 PM