I'll Give You Something To Feel Guilty About 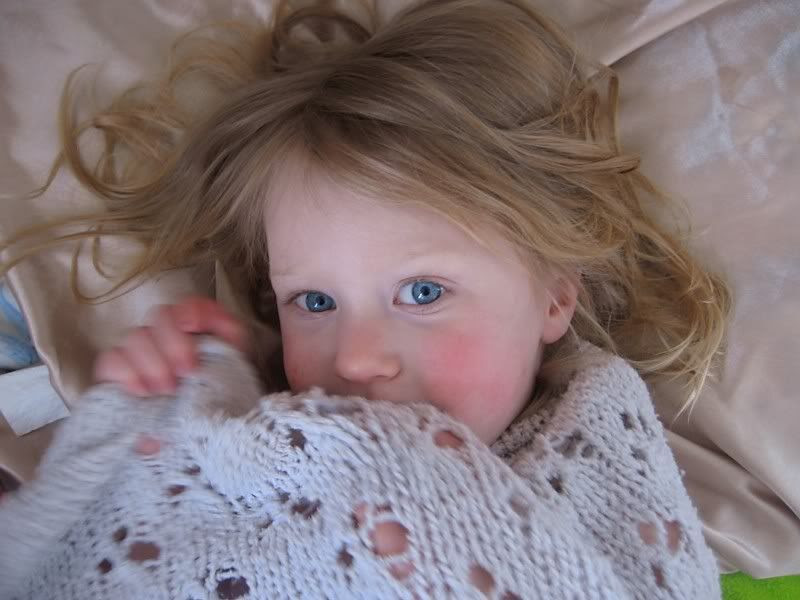 When I was pregnant with Ayla, my old college roommate hand-knit us a blanket. It was beautiful. A creation of soft, fluffy, pale lavender wool, and love.

We used the blanket with Ayla, but as these things go, she became attached to a yellow blanket from Target made of silk. Ayla is six years old and still sleeps with that blanket, which didn't even have a hole in it until Indy, fingers itching and no hair left to cut, carved one into it this week with a pair of safety scissors.

It was a good thing Ayla bonded to yellow blankie, because when Indy was born we were free to use the hand-knit blanket for her. And we used it all the time to prop up her bottle. We were on WIC at the time (formula is expensive), and I had to drag the girls in for monthly fascist check ups. These people mean well but boy oh, does that program need some reform. They told me Ayla was too skinny--my Ayla, who's been along the 10th weight percentile since she was born. Fearing having my formula-buying assistance revoked (that stuff is EXPENSIVE), I, against my better judgment, did as they suggested and started feeding her lots of butter and cheese and eggs fried in butter and topped with cheese. Which would, eventually, lead to our kindly and pragmatic German doctor informing me that Ayla had high cholesterol but ve should not vorry, and me never returning to those WIC offices again.

Anyway, every month at WIC they would say "Do you ever prop the bottle?" And every month I would smartly reply "No". Then I would take Indy home and prop the bottle with the hand-knit blanket. It was so fluffy and full, it did the best job.

Indy's best memories of infancy involve the feeling of that blanket against her cheek. It was there when she took her meals and her afternoon tea, there when she woke up from nap with her face pressed against the crib mesh and the late afternoon sun pinkening her cheeks. It was there when mommy rocked her and sang "Sweet Baby James", when daddy gave her eskimo kisses each night before bed. It warmed her during stories. Waited patiently on the tiles during bath. Daddy could make it into a hammock and swing Indy around. Indy could drape it over her head or shoulders and become a super-hero, or a ghost. It was, without a doubt, her lovey. "White blankie", she called it, because by the time she could talk it had faded to nearly-white.

Indy and white blankie were meant to be together.

The blanket went everywhere with us. Indy learned to walk and dragged it along behind her on all her little adventures. To the store, to the park, through the rain puddles, through the grape bushes that overhung like a ladies hooped skirt. It tattered and began to rip up the middle, but Indy didn't mind. The blanket survived three trips to California. Comforted her on the plane. It came to the beach and tasted the salt of the sea. It enjoyed outings to the zoo and the cherry creek mall. It spent countless hours pressed up between her cheek and the car seat during trips to Grammy's house. Christmas morning, Easter morning, up at three am and puking mornings, white blankie saw it all. For four moves and four years, that blanket went with Indy everywhere she'd go. It absorbed stains and tears and mild abuse like a good-natured mother. One who'd waited over two years for the right child to come.

And then, sometime last September, Indy asked for white blankie and we couldn't find it.

We called both grandmas.

We drove to both grandmas' houses and looked ourselves. Under beds, in basements, under couches, inside old boxes and drawers that hadn't been opened for years.

We couldn't find it.

Indy kept asking for it. "I miss white blankie," she'd say before she went to bed. "Tell me if you find it."

If Ayla had lost yellow blankie, we could have driven to Target and bought a new one. But white blankie was one of a kind. Irreplaceable.

I thought I had sent Indy to grandma's house with the blanket and Indy had come home without it. But after several thorough searches at the house yielded nothing, I began to question my own memory. So I went around to every grocery store in town, looking through lost and founds. At one store I was so cruelly, evilly tricked by something that LOOKED like white blankie from afar, but wasn't. I checked at Target. I even asked at Starbucks.

No one in Longmont has seen white blankie.

Indy is pretty even keel. She doesn't whine or complain. Doesn't throw tantrums. But once a week or so, she sighs and tells us that she misses white blankie. Have we found it yet? she asks.

She misses it like a best fried. Like a fifth limb. A sensory doorway to many precious memories.

There is not yet a happy ending to this story.

It's not too late to do the right thing.

I am Vesuvius and there's little I wouldn't do for White Blankie's safe return.
Posted by Vesuvius At Home at 3:03 PM