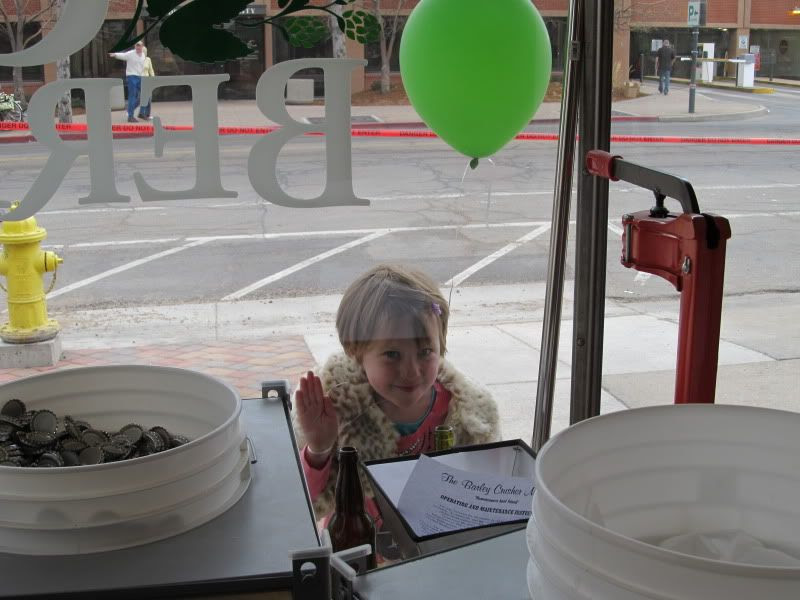 It had been a quiet week in Longmont, warm and sunny, when the family V got into the mini-van, and drove to Ft. Collins, where it was cold and cloudy.

V Baby One had always mistaken the words "Old Town" for "Apple Town", and her parents didn't correct it because they knew it was a sign of their daughter's above average intelligence and what had V earned an English degree for if not to raise children who were awkward and poetic? In Apple Town, the streets were swarming with beautiful families and bike-to-work types and wholesome college kids with dogs, all wearing what V considered a vulgar amount of green for almost a full week before St. Patrick's day. There had been a parade, they hadn't known. The other children, well groomed if somewhat mundane, carried balloons and clutched bags full of candy, proffering them forth like war spoils. No matter, they said. The Mini-V's were begging for whole-wheat pizza and educational video games at Coopersmith's. Because of the crowd, and the accompanying suspicious number of cars for all the people wearing green bike helmets, they parked four blocks away instead of their usual across the street. Walked shivering in the unexpected cold. It didn't matter, they were of good Viking stock, they were Coloradoans who wore sundresses on Christmas eve and Crocs in blizzards. But their restaurant, their own private, safe place where everybody knew their name, was filled to the brim with the green crowds, their shelter-rescued dogs, and their children whom, the family V saw now, were not only plain-looking but frighteningly misbehaved.

They waited for an hour, V and Mr. V. Debated back and forth between the packed seat yourself bar and the waiting-listed restaurant.

They grew snippy with one another.

Mr. V said "Do you want to split a burger?". V snapped "Fine". It was not what she wanted, but would she say this? No. Fine, Fine, everything was Fine. She drank her children's root beer floats when they weren't looking and sent mutinous glares at her unsuspecting husband, ignorantly playing tic-tac-toe with Mini V One.

The waitress, a fresh-faced, smiling college student who was studying non-profit management, worked with local troubled youth, and who would swear mightily when she later saw what kind of tip she'd been left by the family V, brought the wrong beer.

Don't worry, it was fine.

After lunch it was time to sell clothes at Plato's Closet, the local consignment store for hip teens and college kids who thrift-shopped because it was trendy. V had three bags full of old clothes she planned to rid herself of because it made her feel virtuous. She didn't want the kids coming in, knew no one wanted to buy clothes from a mother emerging from a mini-van that had stick figures drawn into the dirt on the back. She grew restless waiting at the store. The kids grew restless in the car and left for gas. At the hip consignment store, V waited one hour to sell six dollars and fifty cents worth of clothes. She resisted the urge to swear mightily at the 8-year-old working the counter who cheerily told her what they were really looking for was boyfriend t's. Does anyone know what a boyfriend t is, she wanted to scream. But she didn't, she was a woman now, a full-grown woman with kids and a mini-van and a well-meaning, clueless husband to prove it. She didn't swear at 8-year-olds in public, she only wrote about them on her blog.

The family V had not returned; she waited for them outside in the cold, jacket off for spite. Everyone staring at her with her two shameful Trader Joe's bags full of what she saw now were, unmistakeably, Mom Clothes. No self respecting "young adult" would touch a maroon Anne Taylor blazer with a ten foot pole.

Mr. V arrived at last with a minivan full of fancy coffee. She was mad, yet how could she be mad? Mr. V had brought her a latte, something she always wished he'd do. He'd saved it for now, he'd done it on purpose, knowing this was a time when she wanted to be angry, deserved to be angry. He'd brought the latte just to spite her. Usually Mr. V snapped back when she was like this but now he didn't. "I thought you were tired. So I got a grande. I thought it would be better," he said quietly. The nerve of him. He was the most decent husband on earth, to question the fact that he'd driven off and left her to wait ashamed in the cold for 30 minutes could not be brought up by any woman but the greatest harpy.

"It is better," she admitted grudgingly. How had he known to do this? Had they taught the men to diffuse wifely anger with passive-agressive treat-buying and consideration at that non-denominational Christian church he'd been raised in? Would this have happened if he'd been confirmed by Pastor Ingqvist?

In the car back to Longmont, the sun returned. Garrison Keillor came on the radio. She turned it up. Even now, after all this time, she liked her weekend evenings with the Prairie Home Companion. Mr. Keillor sang, his voice comforting like an old hymn, honey could we ask for more? Guy Noir asked a man if he was depressed.

"Speaking of Catholic," said V. "Did you read my blog?"

Oops, she thought. She'd been going for Woebegon.

But, thought Mr. V. I like her best that way.


I am Vesuvius and I am strong, Mr.V is good looking, and all our children are above average.

Flash Week starts tomorrow, as it turns out.
Posted by Vesuvius At Home at 2:33 PM

Labels: Flights of Fancy, Little Bird and Starbuck, my kids draws Jupiter like the spawn of Hawking and Michaelangelo what does your kid draw, You Know You Were Raised Lutheran When