This Is Not My Beautiful Life 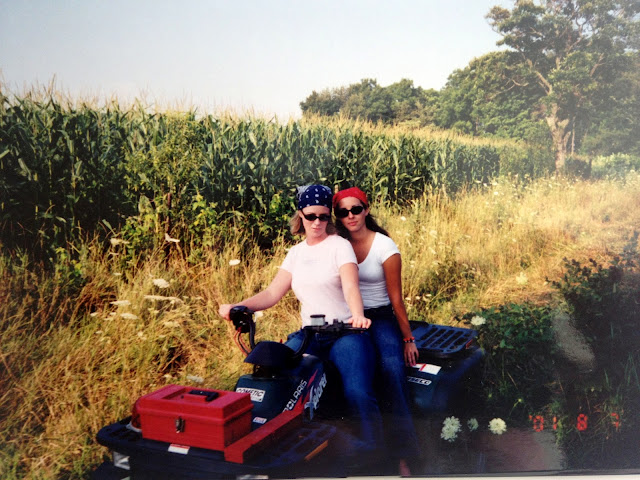 In the summer of 2001, I met the man I didn't marry. I was just barely twenty and away from home with a friend, a city girl transplanted from the arid plains of Colorado and dropped in the sweltering humidity of rural Michigan in August. It was Amish country. When we could muster the energy, between lemonades and naps in the drowsy heat, to go for the mail or shout down the road to the neighboring farm, we'd see them rolling by in their carriages—sad, scrawny broke down horses, heads hung, leather reins clutched in the hands of men wearing round black hats from another time. They never looked at us.

We'd flown in for an O-Town concert. Too old to be chasing boy bands around the country and on top of that, we'd picked the lamest one. We'd missed Backstreet and N*Sync and I suppose we wanted to catch the tail-end of a fad when we still could. We were products of our Lutheran High School, held apart from the world, told we were above it. As a result, we were a little behind on everything. We'd worn shapeless Old Navy t-shirts and clunky white shoes all through high school. We'd take pints of ice cream to the magazine aisle and sit by the racks, browsing Teen Beat and eating Cherry Garcia, spitting out the cherries. We drove by our friend's house, honking the horn. We watched American Pie and cried when it showed us that boys were everything we'd always feared they could be.

Leila's family was from this strange, forgotten part of the country, like nothing I'd ever seen. Green rolling farmland stretching for miles, creaky old farmhouses, thick, impenetrable abandoned forests.  We were staying with Leila's grandmother, Leila's cousins lived in the nearest farmhouse, about fifty yards down on the other side of the dirt road. Her grandmother had given us the attic bedroom, up a stretch of stairs so narrow and steep I never once climbed them without clutching the rails. There were cobwebs around the drain in the sink, dried little gnat bodies suspended in old dust. The pipes creaked. For the first few seconds, the water always ran brown.

I don't remember exactly when I met him. I think really it started the night we asked him to build us a bonfire next to the trampoline. We'd spent the day floating down the lazy river in black inner tubes. We thought it was a common enough recreation, but as the stream had meandered through back yards, people watching us perplexed from their back patios, we'd wondered. In the late afternoon we arrived, wet and dripping, back at the old farm house. We'd tied bandanas in our hair. Now the picture makes me laugh. I think we look like Friends of Ellen. For the life of me, I cannot remember how we thought we looked, except cool and hard and everything we weren't. There were fireflies in the red soaking light and goosebumps on my pale skin. We asked him to build us a bonfire, and he agreed.

We stood around the fire in the starry Michigan dark. He had to rise early for work the next morning but he stayed up with us. He still lived with his parents, it wasn't uncommon in farm country. He earned money and on the weekends he helped with the farm. He told us about castrating pigs. Our city indignance baffled him. How cruel, we cried, how sad, and he looked at us in honest confusion. Farm pigs must be castrated. So it had always been. As soon as the sun went down, the humidity on our skin left us chilled and shivering. Leila and I fell asleep, damp, on the trampoline. When we woke in the misty dawn, the sun pink through all that moisture banked over the cornfields, there was a blanket over us. We snuck back down the road to Leila's grandmother's house, bleary-eyed and possibly barefoot. He was gone.

That weekend he agreed to take us out on his boat. Most of the boys I'd met until this point hadn't been nice to me. I don't know why. In high school, boys ignored me, at best.(I count myself lucky for this now but at the time, it was devastating). The college guys I'd fallen in with were partiers and treated me as a circus rarity they'd developed a strange affection for. They'd cajole me light-heartedly to drink, to smoke, to do things I swore I wouldn't do. I was still under the spell of my upbringing, still equated normal college-aged behavior with the evils of the world. I still thought I was better than some people for the things I wouldn't do.

But he was different. He was relaxed and kind. He didn't speak much, he took our teasing with a slow, warm smile. I don't remember much about that day on the lake, only that it happened, and it was good. I have a picture he took of the two of us, me and Leila. I've got one arm over the wheel and one around Leila's shoulders. In pictures with other women, I always ended up looking like their boyfriends. There are still some feminine nuances I don't understand.

On our last night there, we piled into his Jeep. I rode in the back with him. By this point we were holding each other's gazes too long and I was looking up from beneath my lashes. You know the look. Leila and I fell into the role, adopted the personas of country girls, the highlight of our week a trip down dirt roads in the back of a Jeep, a hot summer evening, the wind in our hair, into town for French fries at the Hot & Now. I remember he was wearing a black baseball cap. His skin was tanned and rough with stubble. He touched my hip as I lit from the Jeep. I kissed him on the cheek.

The trip ended, I returned home to Colorado. He and I stayed up late, holding bashful conversations over the phone. Plans were made for him to visit me. I have a mind that spins wild fantasies quickly, before I can stop them. I saw myself back in the white farm house, overlooking the green fields, the buggy air and the evenings on the gators, by the fire. I ignored the insistent doubts in my heart and imagined a life for myself that involved tractors and pig castration and Amish people.

I can't remember if classes were in session that day. I think they were. I do remember that campus was far quieter than usual. I remember walking across the green to the building where many of my English classes were held, my Jansport sweaty on my back. I was on my new cell phone with him. He was sitting at the Sturgis airport, just in case flights started going out. They didn't. He went back to the airport the next day. No flights went out the 13th, either.

In the days that followed, we got to know each other better over the phone. What can I say? I was a feminist, a budding liberal, a college girl writing papers on bell hooks and Claudia Card. I was too young yet to understand my own nature: a lone-wolf who needed emotional wide open spaces, a dreamy heart and precious little pragmatism. He was a Midwestern farm boy, salt of the earth, hard-working and family-oriented, a builder of bonfires, castrator of pigs. I know clearly the moment things between us fell apart. For some reason, it was important to him that a wife would sit and watch the basketball game with him, not because she loved basketball, but because she loved him. I told him I would do no such thing, all my sensibilities piqued. We bid each other a terse goodbye. We never spoke again.

Just two or three weeks later, I would meet a boy who had a J.R.R. Tolkein tattoo and feminist leanings of his own. Who kept a picture of his three fierce-looking sisters in his wallet. Who would call our house and leave silly messages for my roommate's dog and who would, unbelievably, be attracted to my rougher edges. Just under one year later, I would marry him.

When things first ended with Leila's cousin, I was devastated. I'd never had a serious boyfriend, I thought something was terribly flawed in me and that I would never be loved. At nineteen, it seemed the world brought good things to everyone, but not to me.

What I feel now is lucky. To have come so close. To have danced with, and then escaped, a fate that wasn't mine.
Posted by Vesuvius At Home at 11:43 AM

Labels: I am not the singer that you wanted but a dancer, I have heard you are a man with true grit, Summerland, Travel is a Privilege, Tribes That Once Were Mine, Vesuvius Remembers