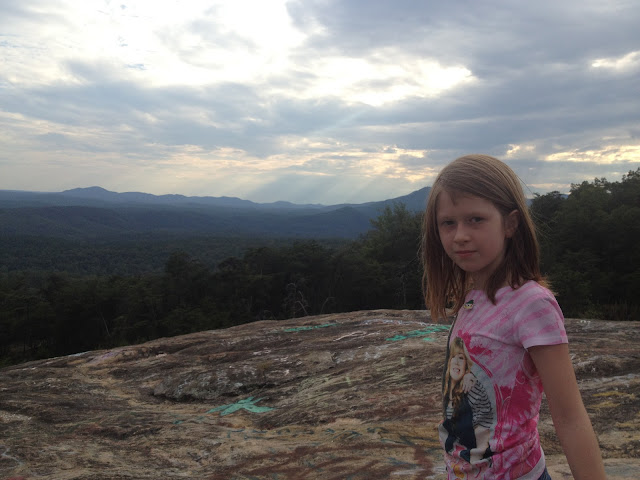 Woke up in the wee hours this morning to drive Noah to the Greenville airport, where he caught a flight back to Colorado. I have spent my life living in the shadows of Longs Peak and Mt. Evans, in a state shaped like a square and divided by one sharp line. To your left are the mountains, to your right, the plains. I would call the Rockies majestic, though I've heard people here call them imposing and intimidating. Say what you will, they were always there to guide you home. You have to be very silly to be very lost along Colorado's front range, the mountains a long backbone along the curve of the earth, due north to due south. Facing forward like good soldiers. I had to move away from them to realize what a compass they had been to me. Now I live in a place where nobody knows where west is, not really. You can't even trust the setting sun, because of the lay of the hills. At five in the morning, in the very dark, we drove an arduous road through the thick woods over Cedar mountain. I dropped my husband at the airport, held him close, kissed him goodbye. Then, girls in the back, I turned and headed west, or north, or sometimes south, to home. The sun was coming up and from the flat earth of Greenville I spotted the soft rise of the Blue Ridge mountains, peaking up like the bounty of mother earth, who was never told she should be ashamed. Home, I thought, and began to cry. All those years at the feet of towering giants and then, another range starts calling me home. I skipped the taxing curves of Cedar mountain for another road, a different route. There are simply more directions here than there are in Colorado. We passed the Look Homeward, Angel cemetery, but of course you see the inherent issue. I thought how I was the opposite of Bob Dylan, the antipole to a rolling stone. I do not lack direction home. Rather, my paths are many.
Posted by Vesuvius At Home at 9:00 AM