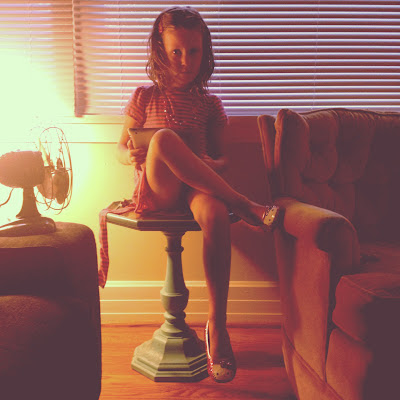 I don't know how we spent the morning. The day before, we'd gone to the farmer's market, which is called the tailgate market, and bought chorizo breakfast tacos and lemon chess pies. We'd seen our new neighbors and new friends, walked around looking at the tomatoes and squash and corn, which we didn't need to purchase, because our neighbors had been leaving them on our doorstep regularly. It seems that everyone here grows gardens, and grows them with great success, western North Carolina being a rain forest, a fertile crescent, where I am told one can grown nearly anything. I want to grow coffee beans. I want to wear a panama hat and cradle green coffee beans for roasting in my soil-covered hands, but look, there goes my movie self again. Not me. Never me.

I probably cleaned the house, or laid listless in bed with a book. I am easily overwhelmed. The weight of the day's tasks often crush me and I curl up in bed, happy and hating myself by turns. I don't remember, but in the afternoon we got in the car and drove a direction that might have been north to Asheville, where Noah was flying in to see us for the first time since we'd moved, four weeks before. As we drove, the valley opened up and I could see the sky. Everywhere was green. We were bouncing with excitement. We were minutes from the airport when Noah texted to say his plane had been delayed in Charlotte and he didn't know when another flight would leave.

Since moving to Brevard four weeks ago, all the vestiges of my former life had vanished, washed away by the daily torrential rain. All the places I knew were fifteen-hundred miles away. The landscape had changed like an old-time theater prop and all my routines with it. All the people I knew. The places I used to drive to and past, the place we used to go for coffee, for beers, for a quick dinner. The faces I used to see around town, the parents at school drop off, the sounds of the neighborhood, the hue of the sky. My husband was gone and for four weeks I had lived as a single mother, making friends alone, going to parties alone, arriving at strangers' houses invited but alone. Everything was changed and it is no wonder, no wonder I lost my sense of self.

So you won't blame me for what I did next. I spoke to Siri, oracle to my slouching Odysseus, and she guided me to Starbucks. The girls asked for a "Frakking-cino" and I indulged them. I ordered a chai and we parked in the shade of a maple tree and pushed all the doors open. Just an hour later, my movie self would arrive to pick up Noah in white lace and aviators and Noah's movie self would tell me how proud he was of everything I'd done, alone in the forest. In reality the sight of him would bring tears to my eyes. Tears that were happy and releasing a bit of the strain that had been keeping me up at nights and waking me at dawn.

But first, while we were waiting, Ayla climbed into the front seat. Two days before, I had walked out my front door and smelled that gorgeous soft-apple scent of fall. Now the breeze that blew our hair to our faces was teasing and cool, and the light filtered rich and golden through the trees. Everything different than the day before. Do you feel that? I said to Ayla.

She closed her eyes and scented like a lioness. "Mmmm," she sighed, so deeply content. "It makes me feel like everything good is going to happen."

Labels: Full of Wish, I have heard you are a man with true grit, La V En Rose, Legends of the Fall, Thumbin' my way into North Caroline, Wanderer