Home Is Wherever I'm With Me 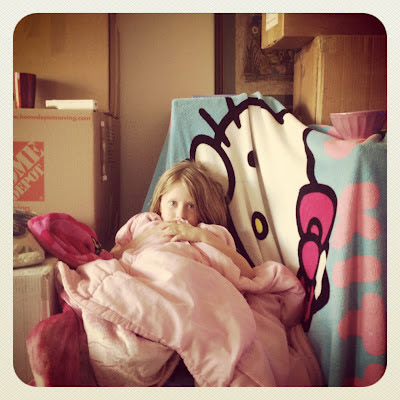 When it became clear that we were going to have nowhere to live for the month of July, the obvious choice was to take a vacation. Mr. V had been offered the use of his mother's camper to stay in, but what is left the daughters? Nothing but the darning, as usual.

When it became clear I was going to take a vacation, the natural thing to do was to name it Rainbow Tour. I planned to drive through Idaho all the way up to Portland to visit my sister-in-law, Mercy, who lives there in typical Portland fashion with her musician husband, both of them working at an organic bakery to make ends meet, maintain street cred, and eat croissants. The dream of the 90's, y'all. After a week there, I was going to travel south down the coast to visit Blood Sister A in Sacramento, where she works at the Capitol building for the Speaker of the Something and the Representative of the Other-what, dealing with a lot of you-know-what-shit while trying to improve people's lives. She watches C-Span all day and cares about it, it's hard to believe we're related. (What do you mean, "we're not"?)

Immediately I did what any self-respecting artist does to prepare for a tour--I started soliciting donations and letting my leg hair grow out. I began the process of choosing a tour t-shirt, and selected Rainbow Tour's official album. (It's magnificent). Excitement grew as I planned trips to the zoo, and Mt. Hood National Forest, and A's friend's houseboat in the Bay area (see how I talk just like a local, now?). Meanwhile Mr. V sent encouraging texts about how much he loves my spontaneous side, things like "This is awesome, I get to work all day and live in a trailer down by the river while you take off on a magical bus tour"*. It's a sacrifice, I know, but I'm willing to take vacations whenever necessary and it's what he admires most about me.

(Mr. V keeps saying we need to become less impulsive, and I agree, only it might be working very well but backwards because I just left to take my husband to pick up a trailer and returned with an antique victrola and a pair of antlers.)

In this frenzy of preparation, Blood Sister A wisely pointed out that the more excited I got about Rainbow Tour, the more likely we were to find a place to live.

And that's what happened.

I'm just kidding. I knew this was a win-win situation all along. Either I take Rainbow Tour, or I get a home to live in, and we found a cute rental. It has hard wood floors, which is good, because I have sworn a blood oath against carpet and am honor bound to burn any the moment I lay eyes on it. I got to pick the bedroom paint colors, and it has a massive hulking lawn that I'm going to get to mow all by my lonesome, because guess what? The girls and I are moving out on July 12th, and Mr. V cannot join us until October. I told him I hoped he was feeling nice and sorry for me now, and that's when he said we could hire people to mow the  football field-sized lawn for me.

So you see, he's not heartless after all.

Right now Mr. V is out working in the hot sun--it's supposed to hit 102 degrees here today--moving things into storage, so I'd better get off my whimsical rainbow blog, which smells like tulips and rain and tastes like Bordeaux (or will, once technology catches up) and pack a couple boxes for the girls to add to their throne.


*actual text from Mr. V. You might have to be him or me to understand how jokingly he meant this and how hard we laughed over it. Or you might just have to be a sociopathic narcissist like I am.

Posted by Vesuvius At Home at 3:51 PM