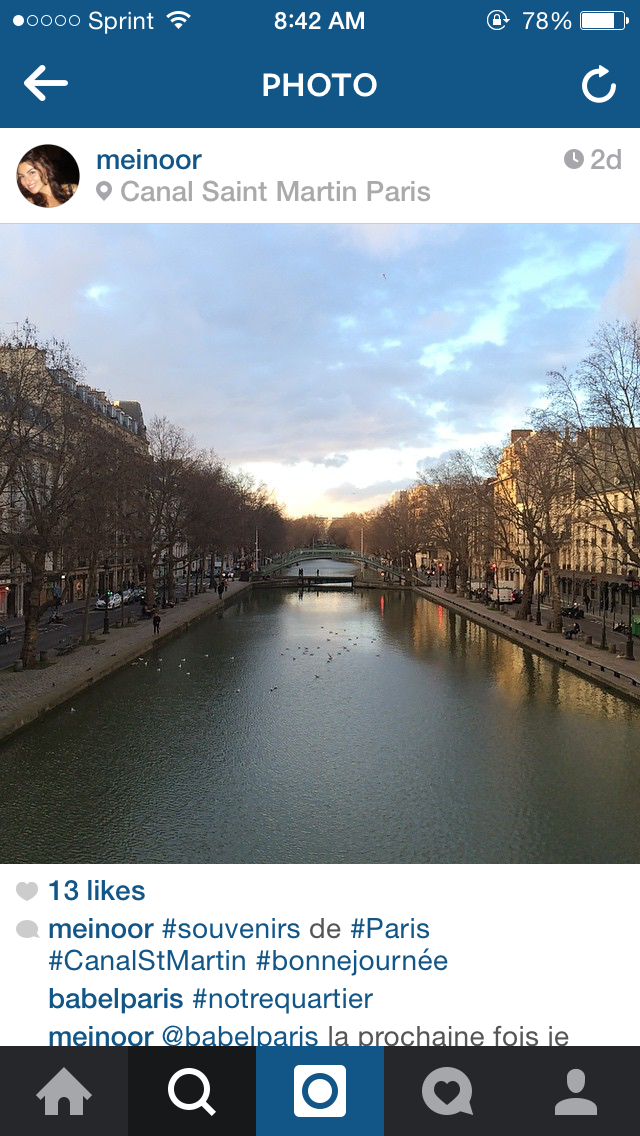 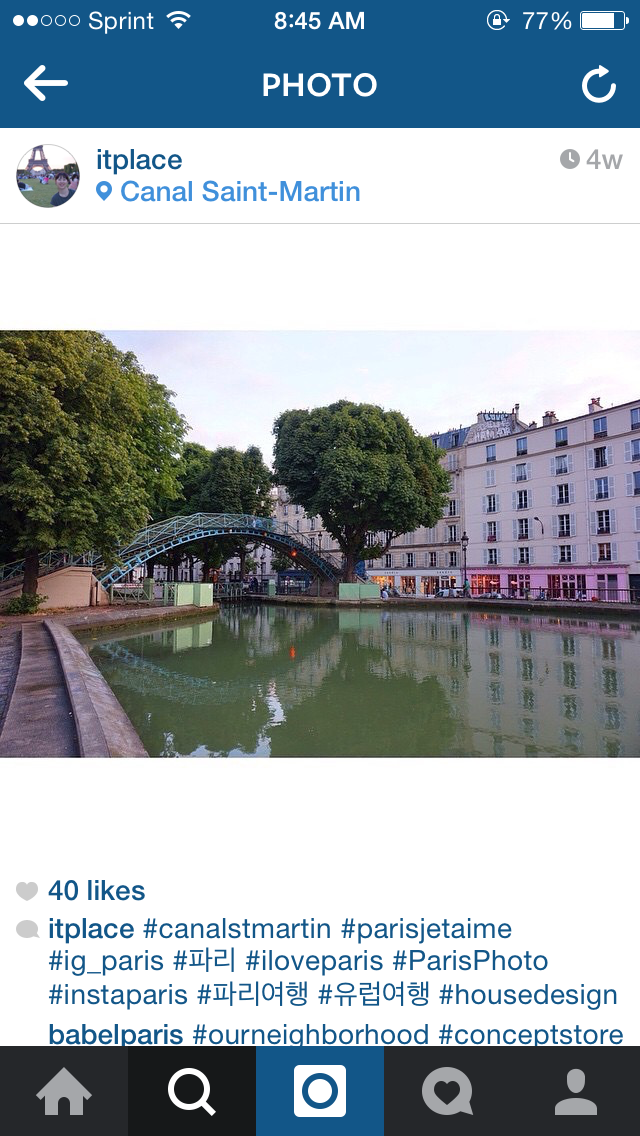 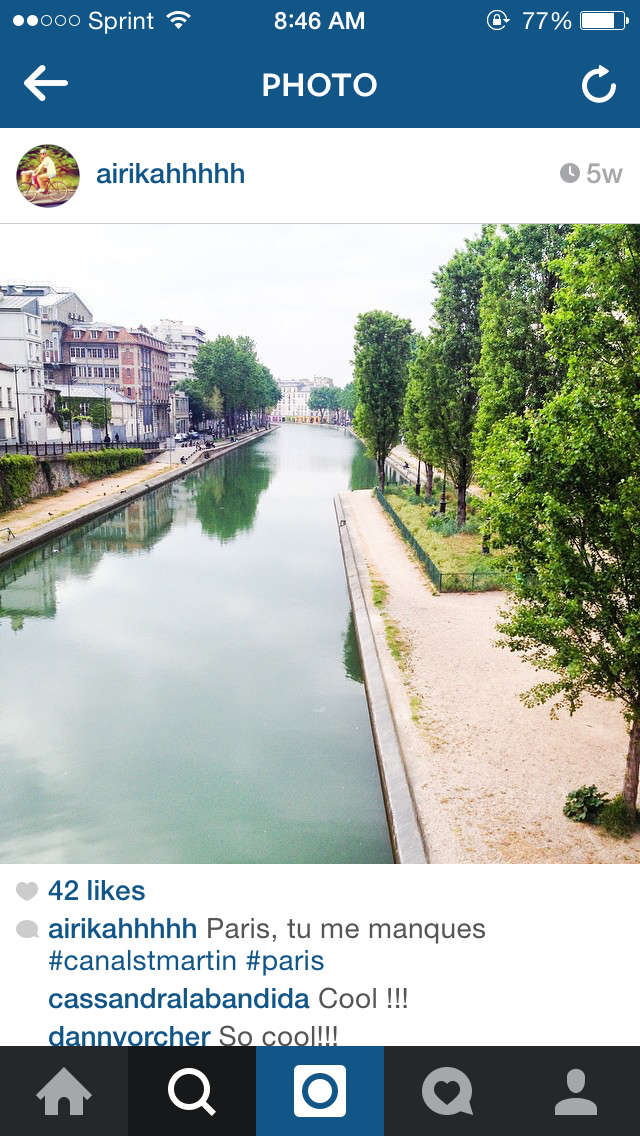 One week from today I will fly to Paris. When I get off the plane all rumpled and dehydrated, I'll take the RER to the Metro to the Canal St. Martin (pictured above and in snow, below), where I'm renting an apartment from a lovely woman through Airbnb. I had originally booked a place in St. Germain des Pres, an ideal location for many, right in the heart of the city. Then I agonized for a week before changing it. (Sorry, sweet Sorbonne student I cancelled on). St. Germain, in the 6th, is classic Paris. It's also tourist Paris. So many of the new restaurants I was reading about were north of the Seine, in the 3rd and 10th and 11th, what is sometimes called "the Brooklyn of Paris", and I'm going to be perfectly situated for all of those. It's also a place where Parisians hang out, but tourists have not discovered yet in total droves. The 6éme is convenient but I was imaging myself sitting down to eat every night in horribly overpriced tourist traps. The 10éme has less of that. Plus, it's all Paris, so who cares where you stay. 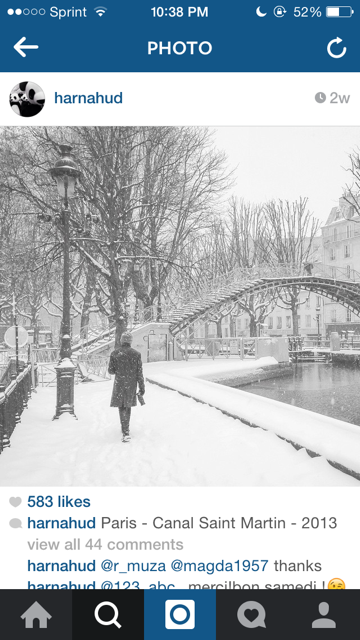 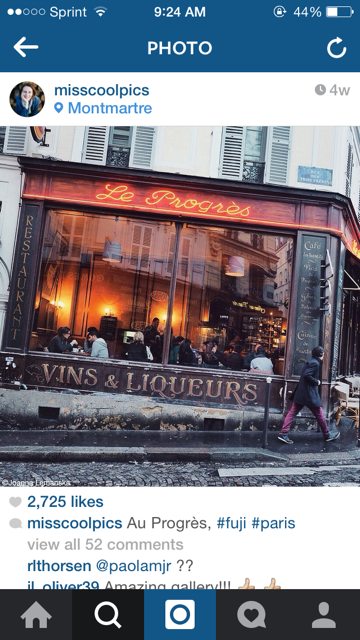 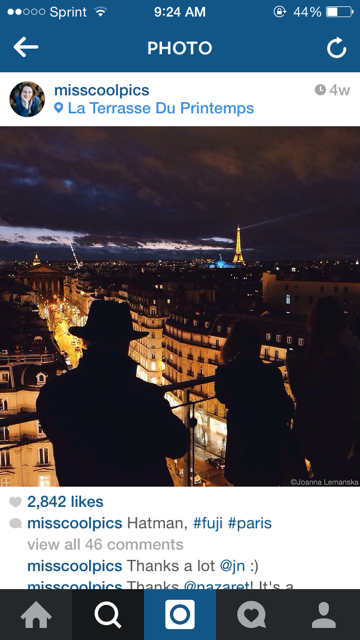 The first full day I'm there, I'm taking a food tour with Paris by Mouth. I had originally thought to do a tour with Wendy Lyn, but she doesn't take solo travelers. Quelle horreur! Paris by Mouth is more affordable anyway, and I've spent hours researching restaurants and boulangeries on their website. It even influenced my choice to stay on the Canal, because their breakdown of restaurants by arrondissement notes that it's hard to find great food for reasonable prices in the 6th unless you are on a chocolate-only diet. Don't get me wrong, I'm going to be spending about a billion hours in the 6th. All the chocolatiers and patisseries are there, it seems. Just a few on my list are Ladurée (of course), Gérard Mulot (macarons), Pierre Hermé (macarons), Henri Le Roux (salted butter caramels), Patrick Roger (chocolates), Poilane (bread), Eric Kayser (baguettes)--and that JUST covers the 6eme. I'm a teeny bit worried that I might go to St. Germain des Pres, get sucked into a macaron-eclair-and-caramel vortex, and accidentally spend my whole budget over the course of a few hours, on sugar and maybe one Diptyque candle.

Anyway, the food tour. The good thing about it is, you pay in advance so it doesn't feel like it's coming out of your trip budget per se, and then over the course of three hours, a guide takes you and a small group around the neighborhood of your choice (I chose the Marais), introducing you to a family who runs a 7th generation fromagerie, a "pig obsessed" butcher, and a MOF chocolatier, which I must insist stands for "Mother 'O Fucker" chocolatier, though really it means Meilleurs Ouvriers de France, something like Best Craftsman of France, and is a prestigious award only handed out every four years. Of course you get to eat all this on the food tour, and hopefully pick up some tips for selecting your own fromage and charcuterie during the rest of your trip. I am really so excited about the food tour. 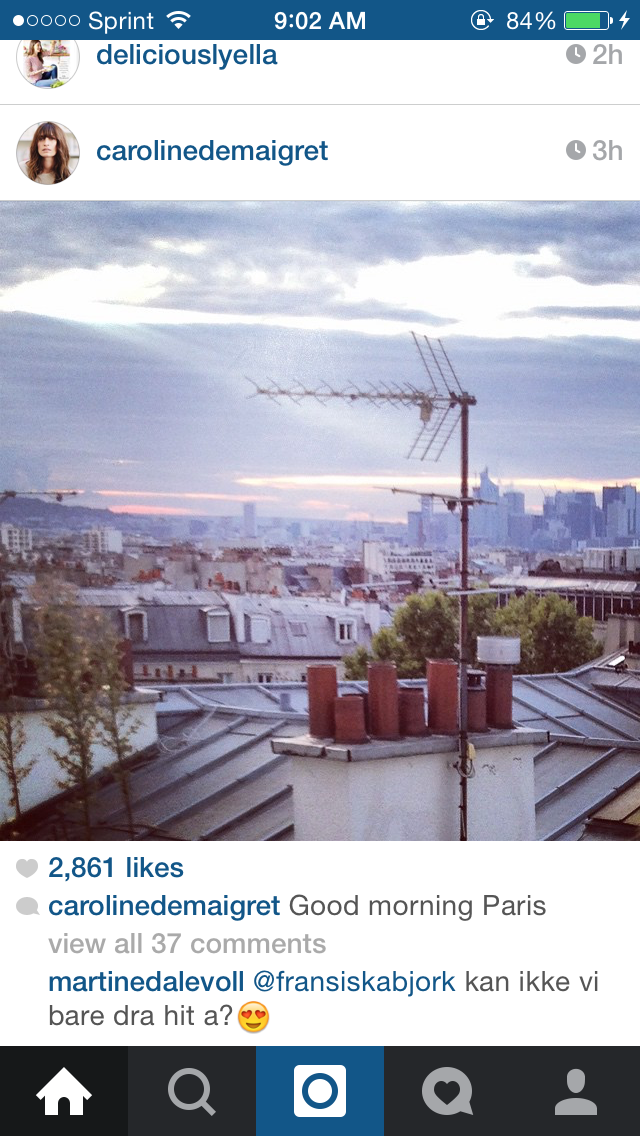 I've been researching obsessively, mostly about what to eat in Paris. Finally I typed it all about by arrondissement, a six-page long list that I can print off and carry in my purse instead of a heavy guidebook. So many of the best restaurants are by reservation only, and I didn't want to be too pinned down. So I only have two reservations for now. One for Bones and one for Au Passage. Both allowed me to book online. I wanted to eat at Frenchie so badly that I asked a friend of mine to ask her brother, who I've never met but who lives in France and speaks the language fluently, to call and try to get me in. He kindly did, and it turned out Frenchie is closed until late summer so oh well, next time.

When I traveled to Paris in college, we managed to hit most of the major tourist sites, and I'm pretty sure I won't be going back to the Louvre or the top of the Eiffel tower. Both involve major crowds and lines, which make me cranky, and I'm all, why be cranky in Paris. Don't shoot me. I'm still planning to go the D'Orsay, which I saw the first time and loved, and the Orangerie, which I haven't seen before. I'll go back to the Rodin, because I remember being mesmerized as a college girl, even though they're doing renovations to the building and Camille Claudel's work won't be on display. I'm also going to the Carnavalet museum in the Marais, which is appealing both because it's in a 16th century mansion and because it's free, thanks to the mayor of Paris, who also provided free ice skating all winter for Parisians at the Hôtel de Ville. I'm planning to go to Versailles, maybe into the Notre Dame again, and maybe in the Sainte-Chapelle. I don't know. This is starting to sound like a lot of sites and I really want to spend good chunks of time wandering aimlessly, sitting in cafes, reading and writing and just being in Paris. And drinking kir, of course, even though it is apparently out of style. I don't care.

More than once someone has looked me up and down and said to me, "You'll have to get some new clothes for Paris!" and I've been like, "I am wearing my new clothes for Paris."  Obviously this doesn't bode well for how I'm going to fit in on the chic streets. What can a girl do? You either have the look or you don't, I guess. I have some black jeans and some black boots, I have a black leather jacket and a trench coat, I have two striped scarves. Recently I've become obsessed with lifestyle bloggers and I want to be one. I just want my life to look good from the outside. Then its like, who gives a damn how it feels on the inside? Leave it to me to get all angsty on a blog about Paris. Moving on.

Rick Steves' guidebooks are the best. He is also hilarious if you read them through cover to cover which yes, I have done. So I'm taking him with me. Unfortunately his maps are NOT the best, so I went ahead and grudgingly ordered a second guidebook, Eyewitness Paris, for the map alone. It's laminated and easy to read, it has a lot of the smaller streets that Mr. Steves leaves out, and it covers almost the entire area inside the peripherique, instead of just the city center, which many maps feature solely.

For reading in cafes and on the plane I have three books, which is probably too many, seeing as how I want to buy one in Shakespeare & Co and get it embossed with their official embosser.

I think Rebecca Solnit's "A Field Guide To Getting Lost" is especially appropriate since that is exactly what I'm hoping to do. I also picked up the new editions of The New Yorker and Vogue (because hello, lifestyle blogger).

I've been practicing my French with the Duolingo app and a podcast called "Coffee Break French", which is produced by two cheery Scots who are probably inadvertently teaching me French with a Scottish accent. I know how to say "I have a reservation", "Can I make a reservation", "Do you have a free table" and "I'd like a glass of red wine, not too sweet, please" so obviously I am covered. Also "Where is the boulagerie", "Where is the patisserie",  and "Un café crème, s'il vous plaît". TA-DA.

What I'm Taking on the Plane: 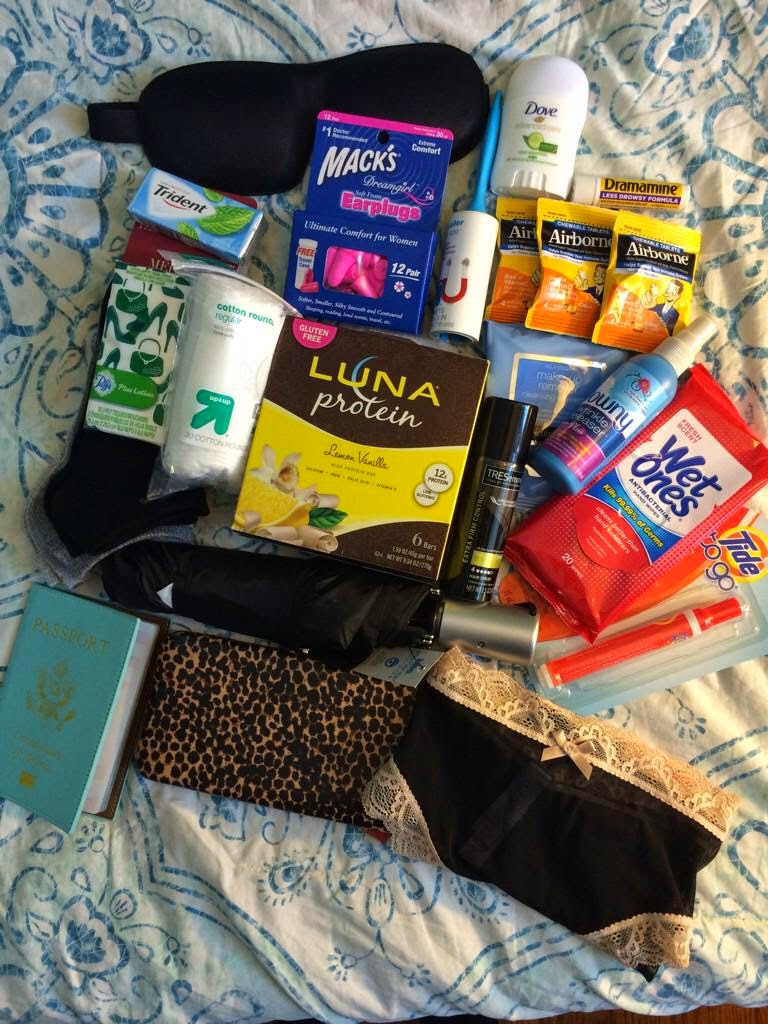 Way too much stuff. Not pictured are the fancy purple damask compression socks I ordered on Amazon. COMPRESSION SOCKS. Wrinkle release spray. Tide To Go pen. Earplugs. Eyemask. Neck pillow. Why why why? Stupid lifestyle bloggers convincing me I need all these things. Last time I flew to Paris with nothing in my bag but a book and a discman and a tube of Dramamine. Dammit.

Of course new underwear, though. It's Paris.

Sorry I showed you my underwear.

Let the final countdown begin.
Posted by Vesuvius At Home at 10:18 AM