It's almost 11pm here and I am exhausted so forgive my words and lets just jump in here, the Paris by Mouth food tour. C'est bon? We went to a bakery called 134 RdT (I think). The tour guide, Catherine,  explained that every year a baker is voted best baguette and best croissant and that whoever wins goes to the palace (which I am just now like, France still has a monarchy?) and provides all the food for the royals (?) (Kate Middleton?) and all the visiting dignitaries (Padma Lakshmi?). It is an incredible honor and, as Catherine said, "life-changing".  This bakery has won a few awards in the past. The newest winner will be announced March 26th, just a day too late for me to rush over there. Good thing I went here instead. 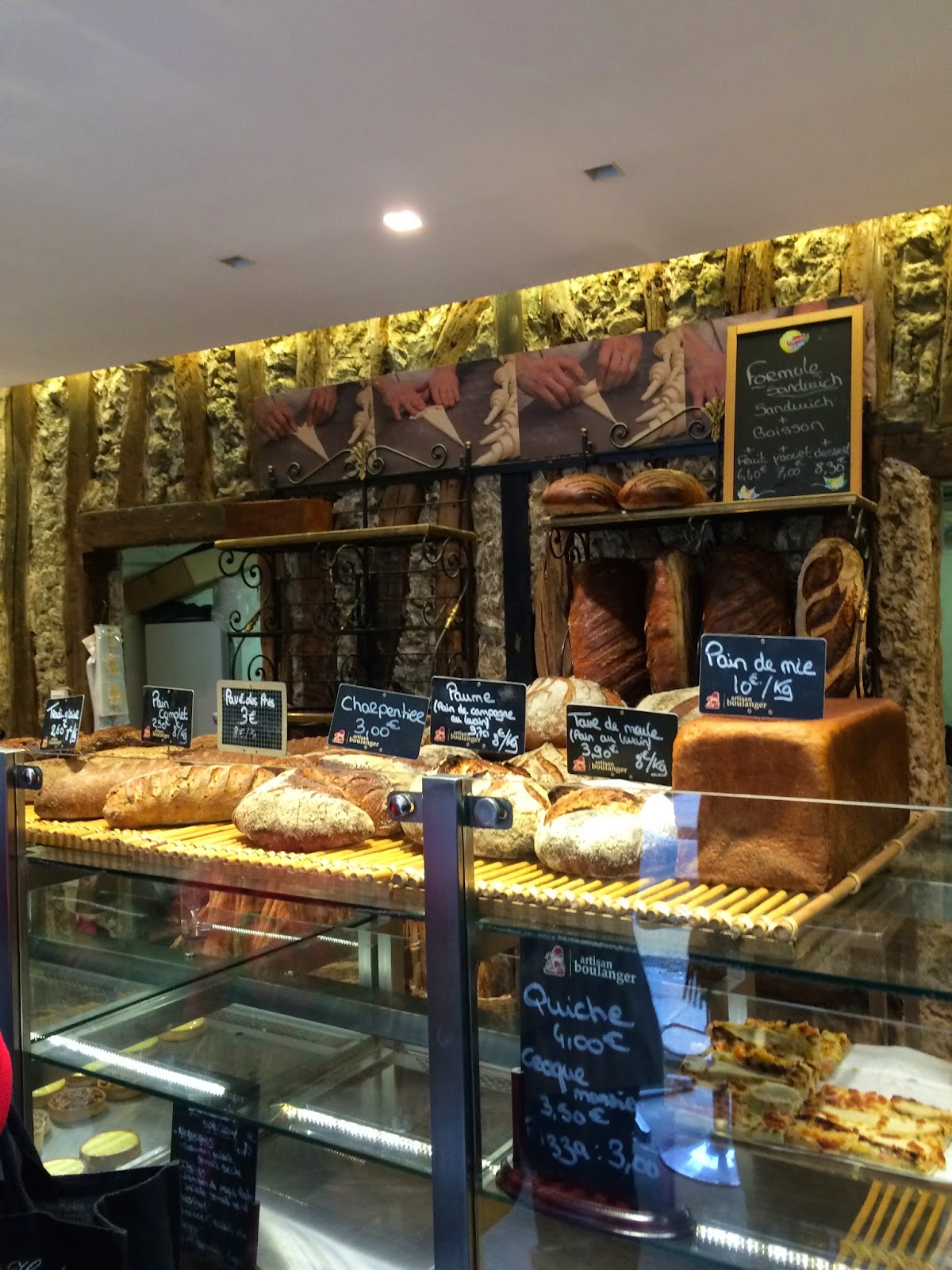 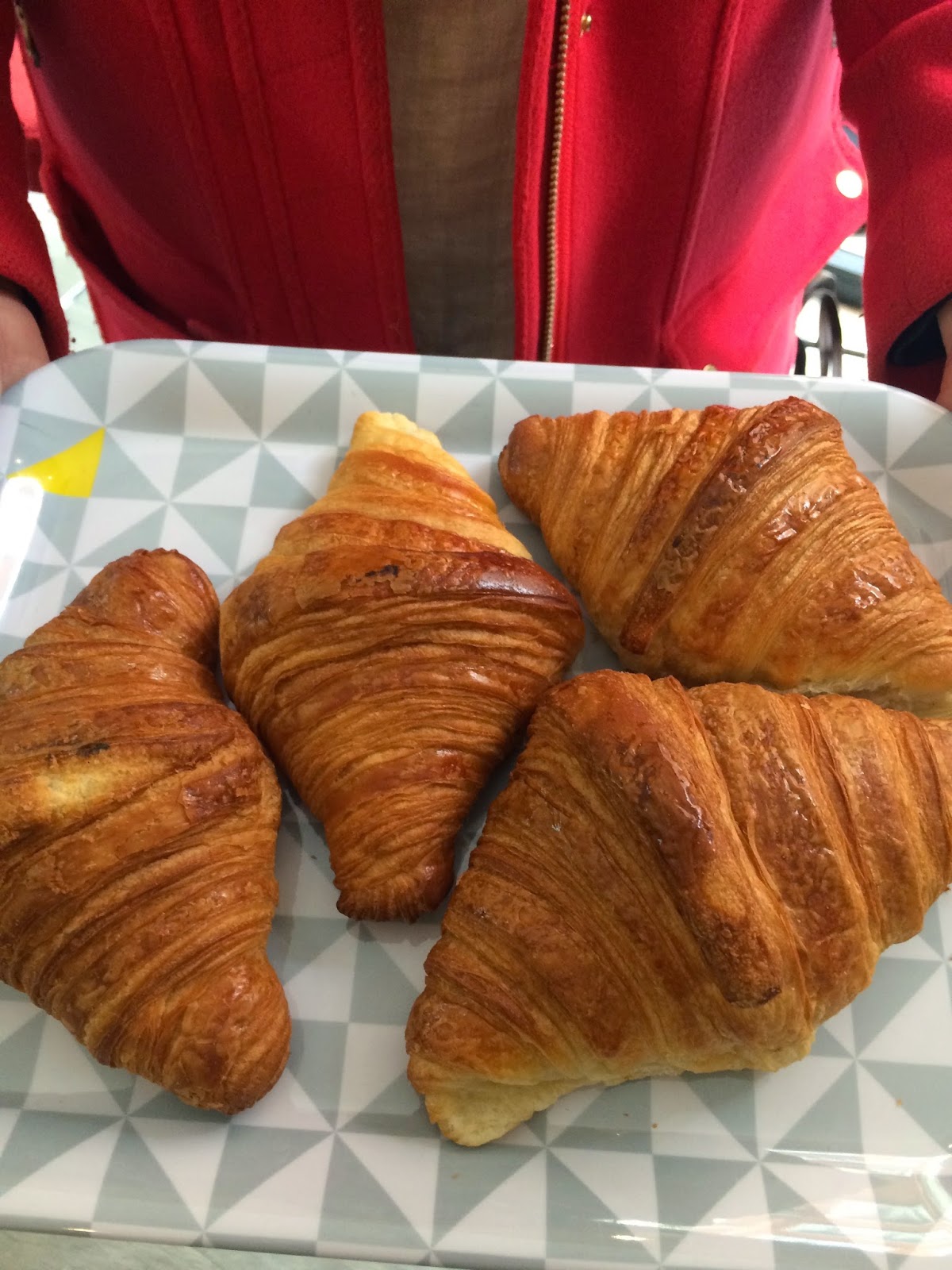 Catherine explained that when you cut open a croissant, it should be springy--it should bounce back into shape, not stay smooshed, which this one did. It should also be like honey comb inside, airy. They are baked throughout the day because the bakers feel they are only fresh for a few hours. A warm baguette came out as we stood there and we tried it. It was truly unlike any baguette I've had in America. I'm so so tired right now. 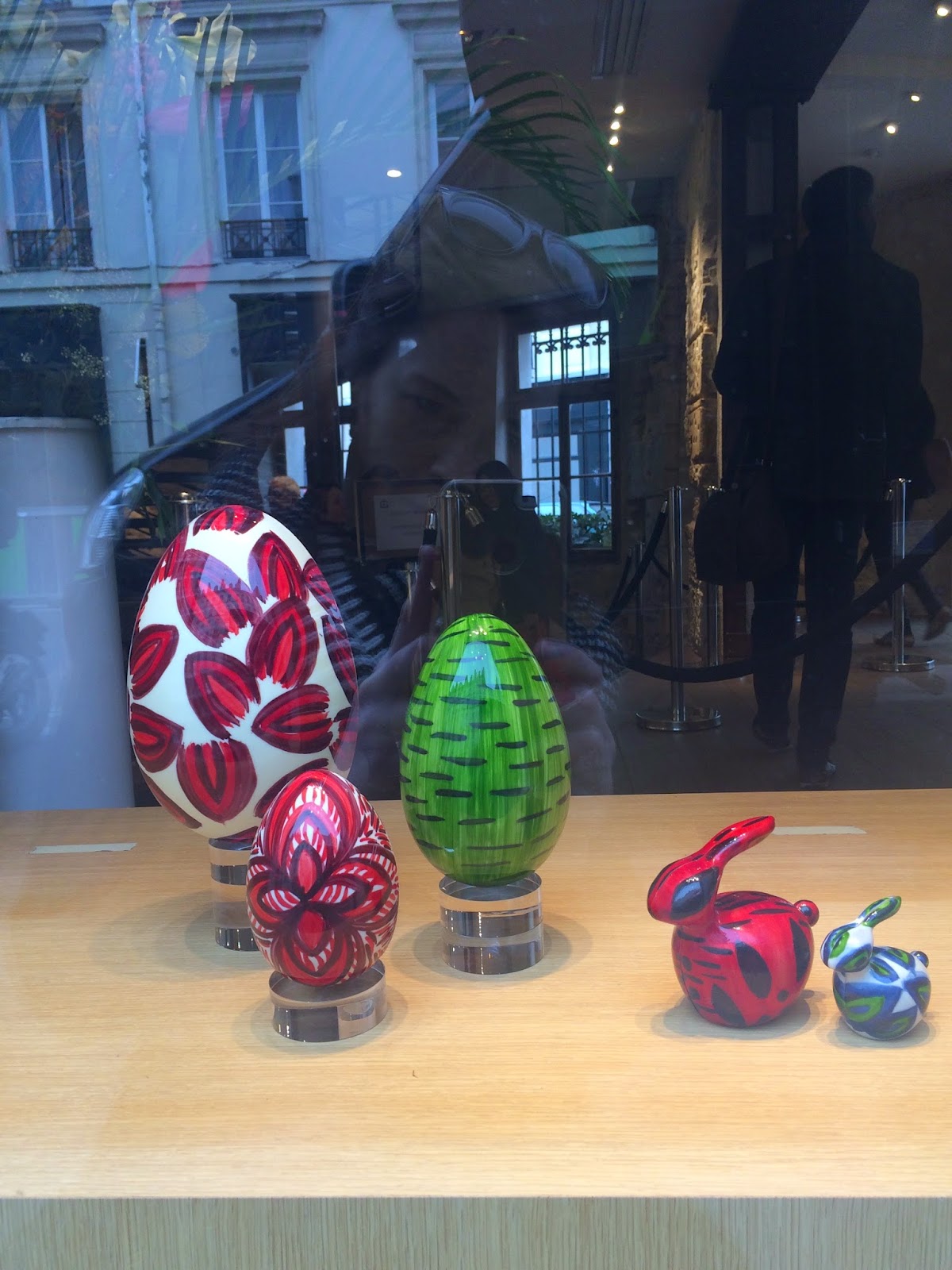 Easter goodies in the window at Jacques Genin. That is painted chocolate. 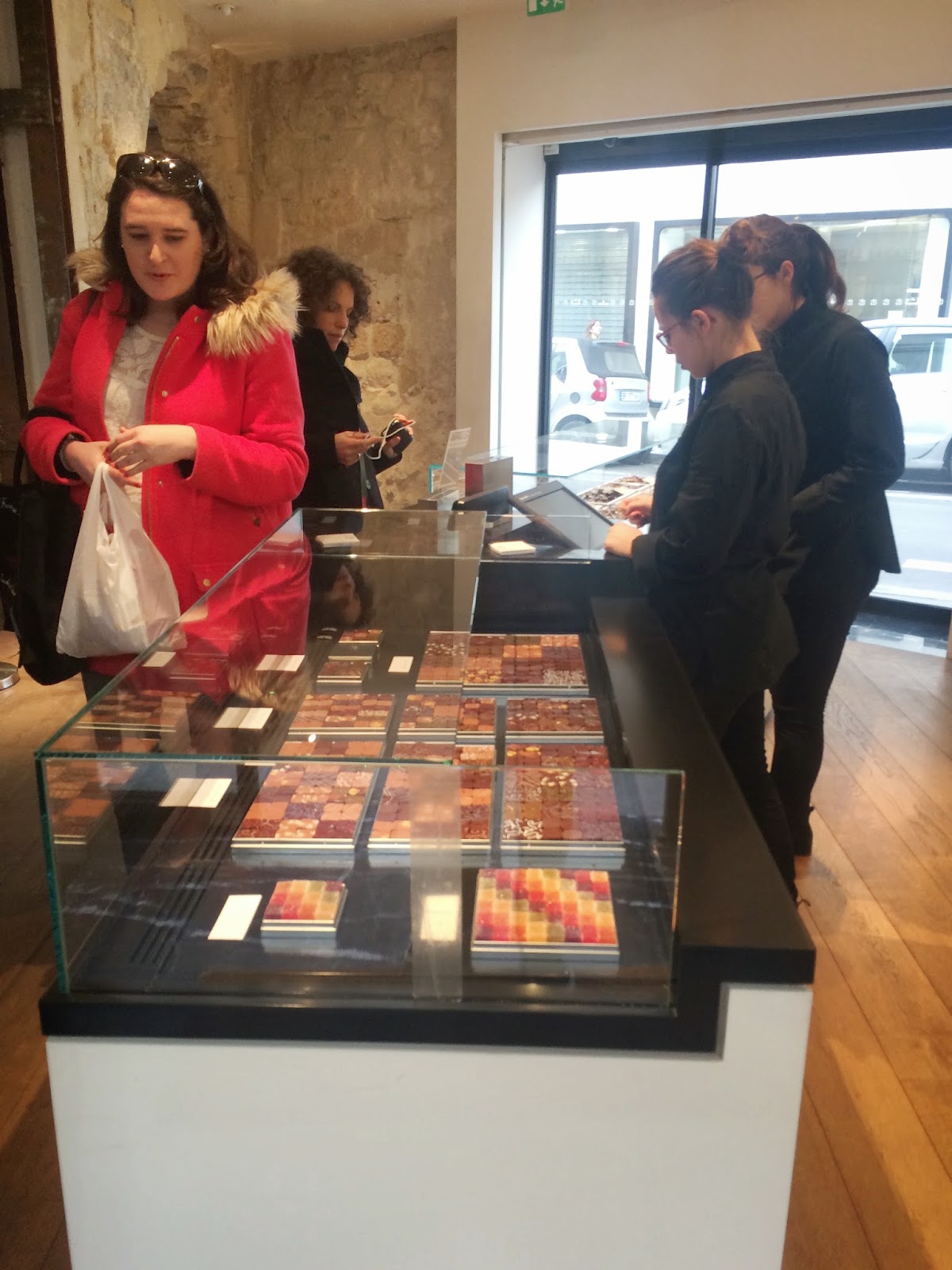 Next we went to chocalatier Jacques Genin. He is famous here in France. Catherine told us that he grew up in an abusive home and left at age 12. He started working in butcheries (is that a word in English?) and then moved onto restaurants. His family was very poor and now he creates some of the finest chocolates, caramels, and fruite pates in the world, inspired by what he imagined the sweets would taste like when he peered into windows as a child, unable to afford the treats. Hearing that story made me emotional. It made the chocolate taste precious. It was already excellent but somehow that story made it magnifique.

Catherine selected two flavors of caramels for us to try. The first was mango, tart, a little sweet, delcious. The caramels just melted in my mouth, they weren't stick at all. They didn't pull at your teeth. Just melted clean away. The second was a dreamy salted butter caramel. She asked us each which flavor fruit pate we wanted to try and all seven of us separately asked for lychee. She said that's the first time all seven people have asked for the same flavor.  We saved the almond and mint chocolates for last. The mint was like biting into something pulled from a garden. No extracts or syrups here. Fresh and real and whole as can be. Perfection. 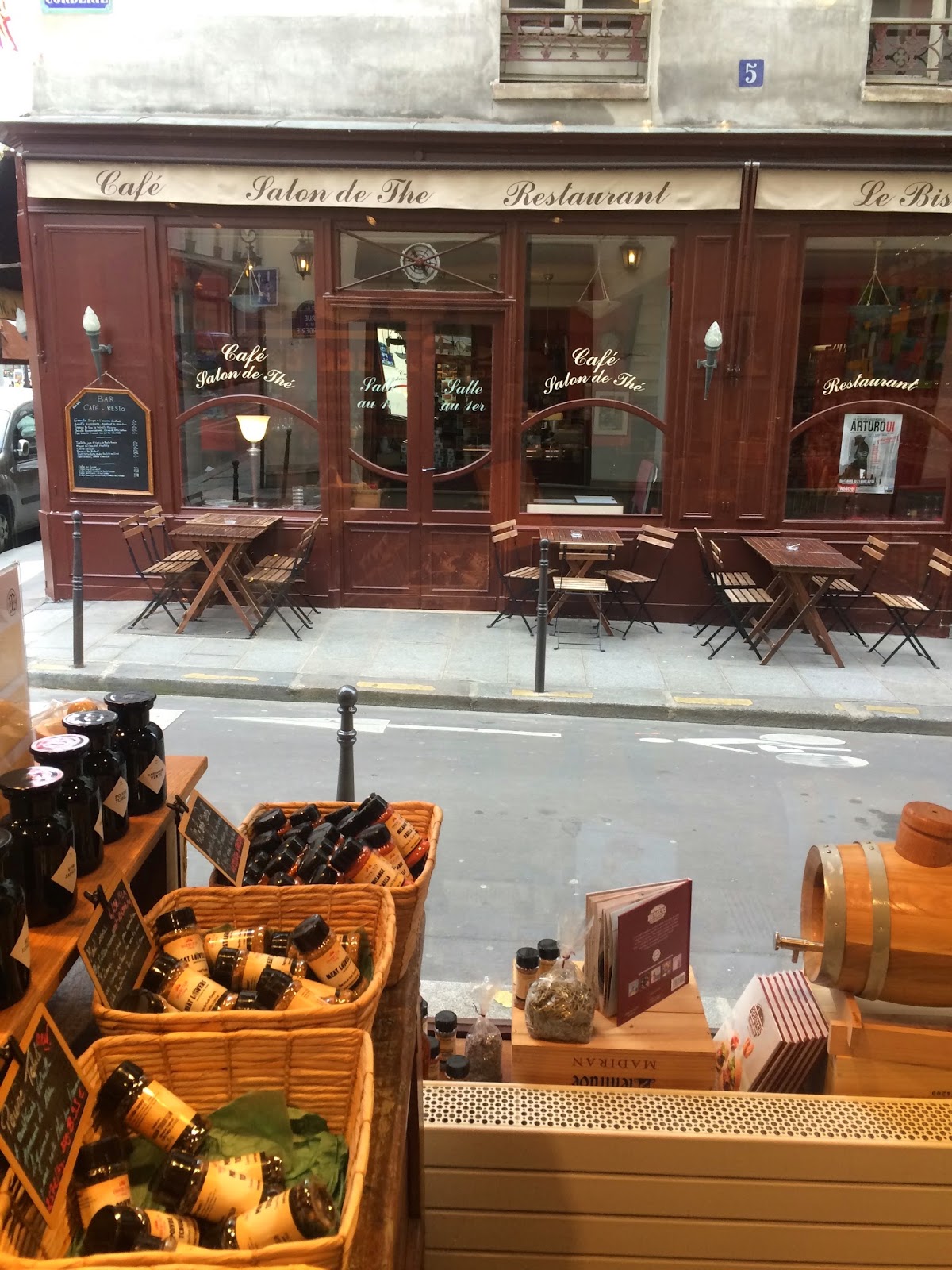 Next we went to a spice shop with a "sniffing bar" where all the tiny jars could be opened and scented. Some kind of almond bean thing (guys I am so so tired) that is illegal here in the US because it thins the blood smelled so delicious and I bought some. I also bought some pepper that smelled like grapefruit, a big smacking kiss of grapefruit. Noah will know what to do with it. Don't worry about my blood and the almondy beans, you have to eat it by the handful to thin your blood. The U.S, so uptight sometimes. 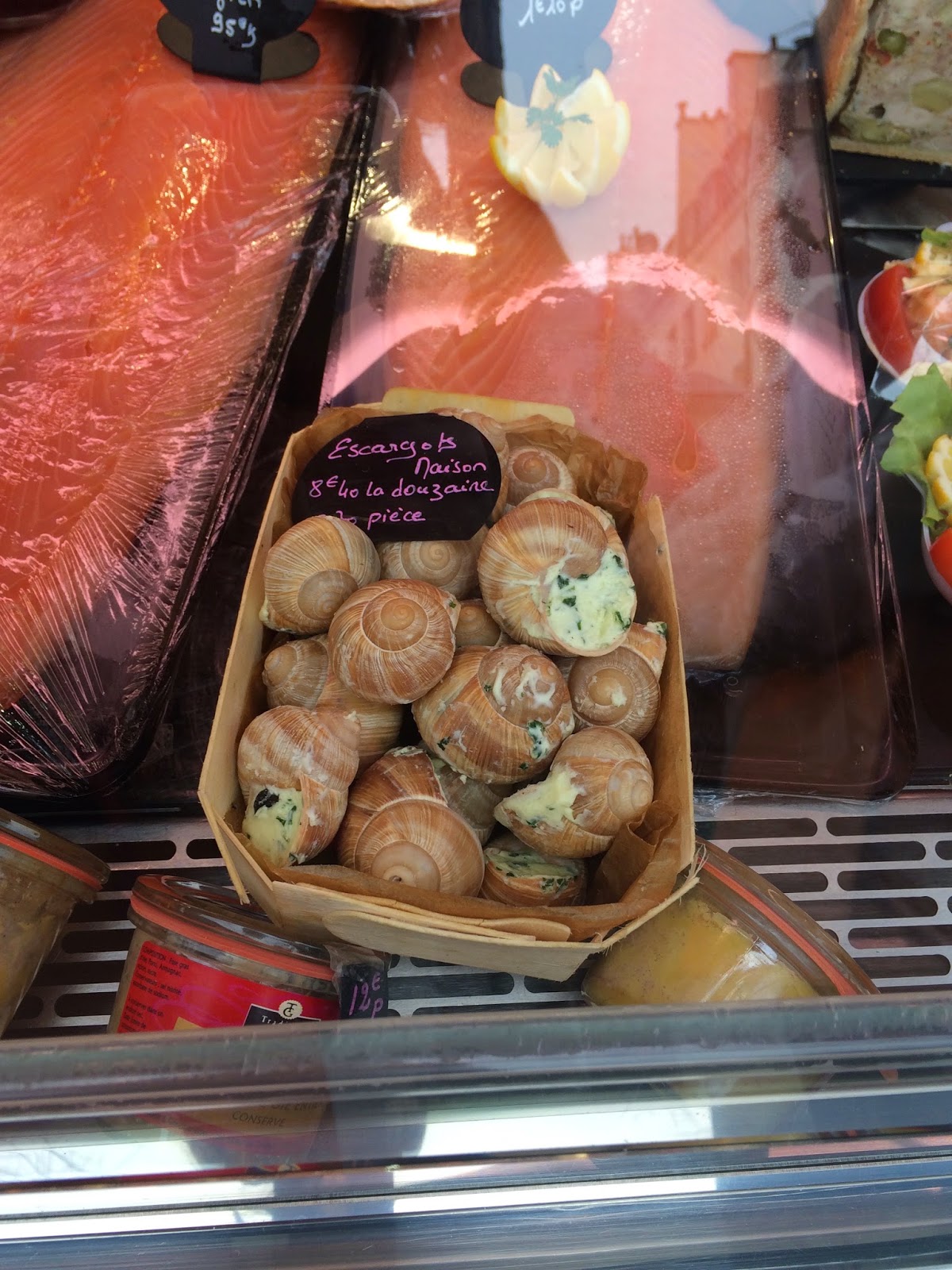 Now we come to a place (marche?) off Rue de Bretagne, which you COULD call Rue de Brittany and not be stretching it too much. There are tons of these little places, selling prepared foods for Parisians to take home so they don't have to cook in their tiny kitchens. But they are intimidating to enter as a tourist--it's hard to know which ones are good, prices are confusing and by the kilogram, and it's like, what even IS that thing? That's why I was so happy to take this food tour. The people here were so friendly and I feel I can go back and manage on my own. 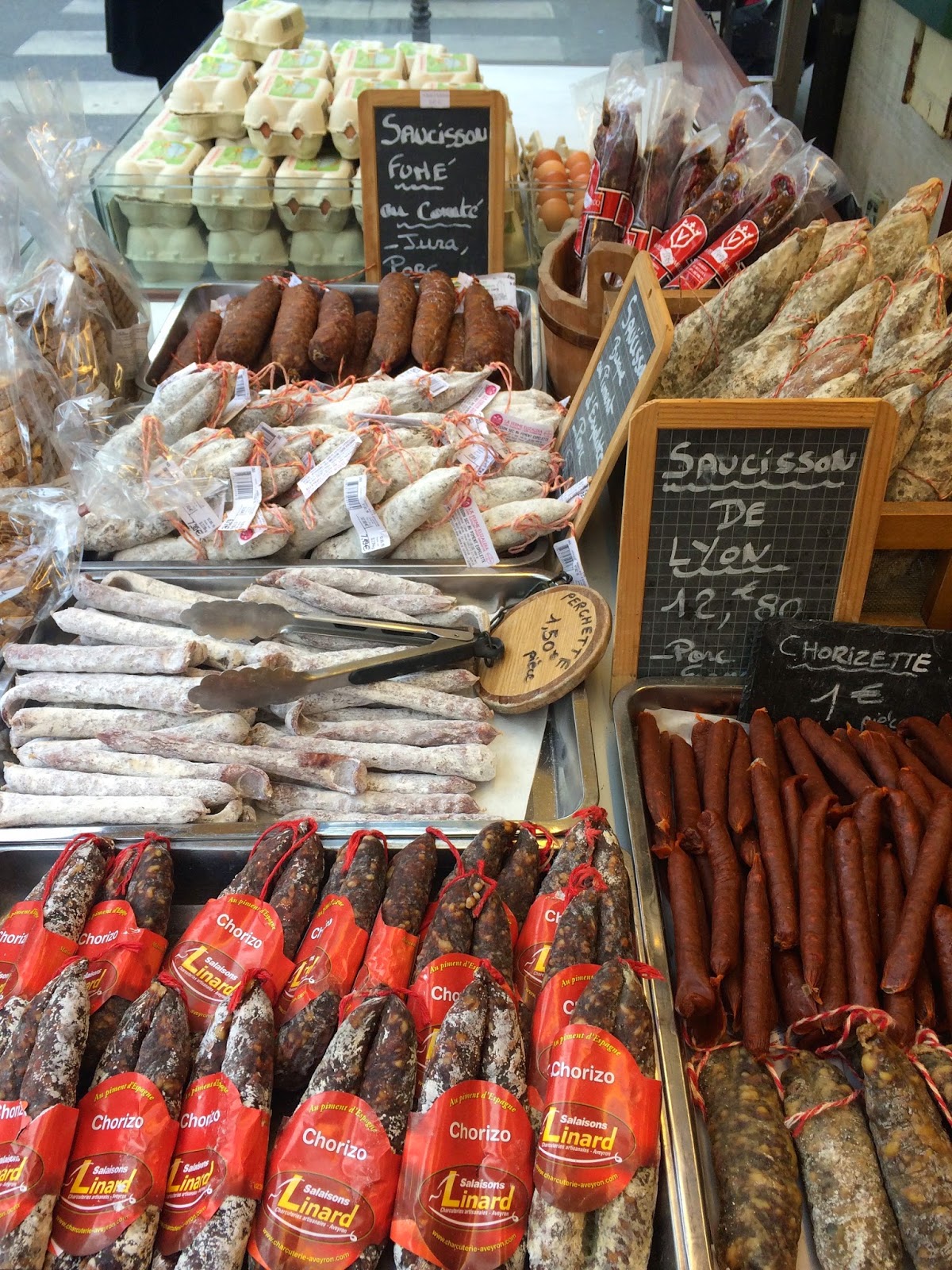 Our guide selected a terrine made with guinea fowl, artichokes, and asparagus. Also "duck butter", which is really rillette, which is meat cooked slowly in fat until a paste can be formed (pretty much). 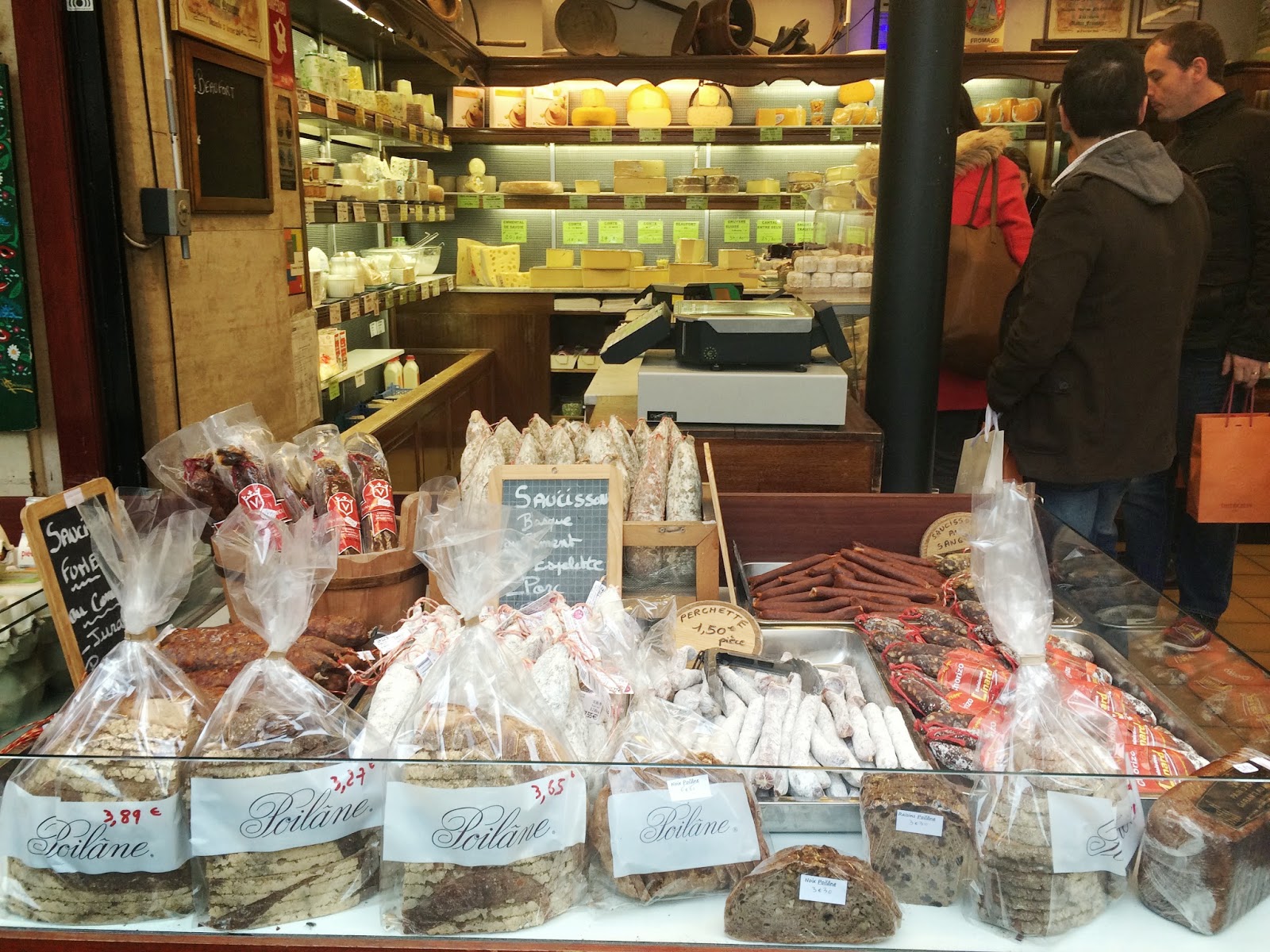 And next, everyone's favorite, la Fromagerie! Catherine told us to look for this sign that says "Affineur" for a reason that I can't remember. It definitely had to do with quality. This particular fromagerie had caves on site--in the basement I think--and the cheeses were aged there. It was run by a father and daughter. We learned that cheese has seasons--goat cheese, for instance, is not best in winter because the goats have been inside eating hay. Now that spring is here, the goats are outside eating lavender and other good things, and goat cheeses are just starting to become "in season". Also it's a good time for goat cheese because babies are being born, so milk is extra fatty. 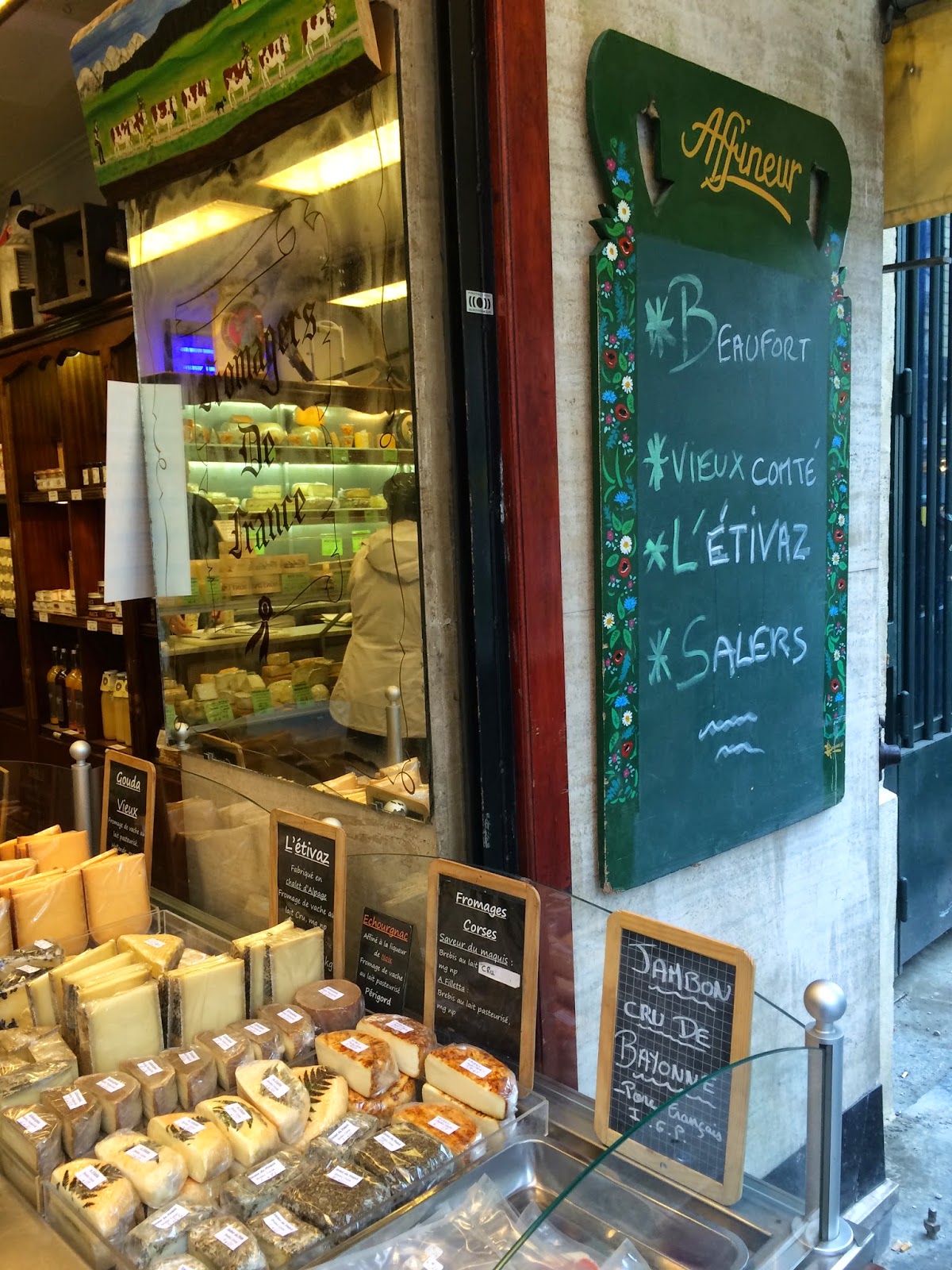 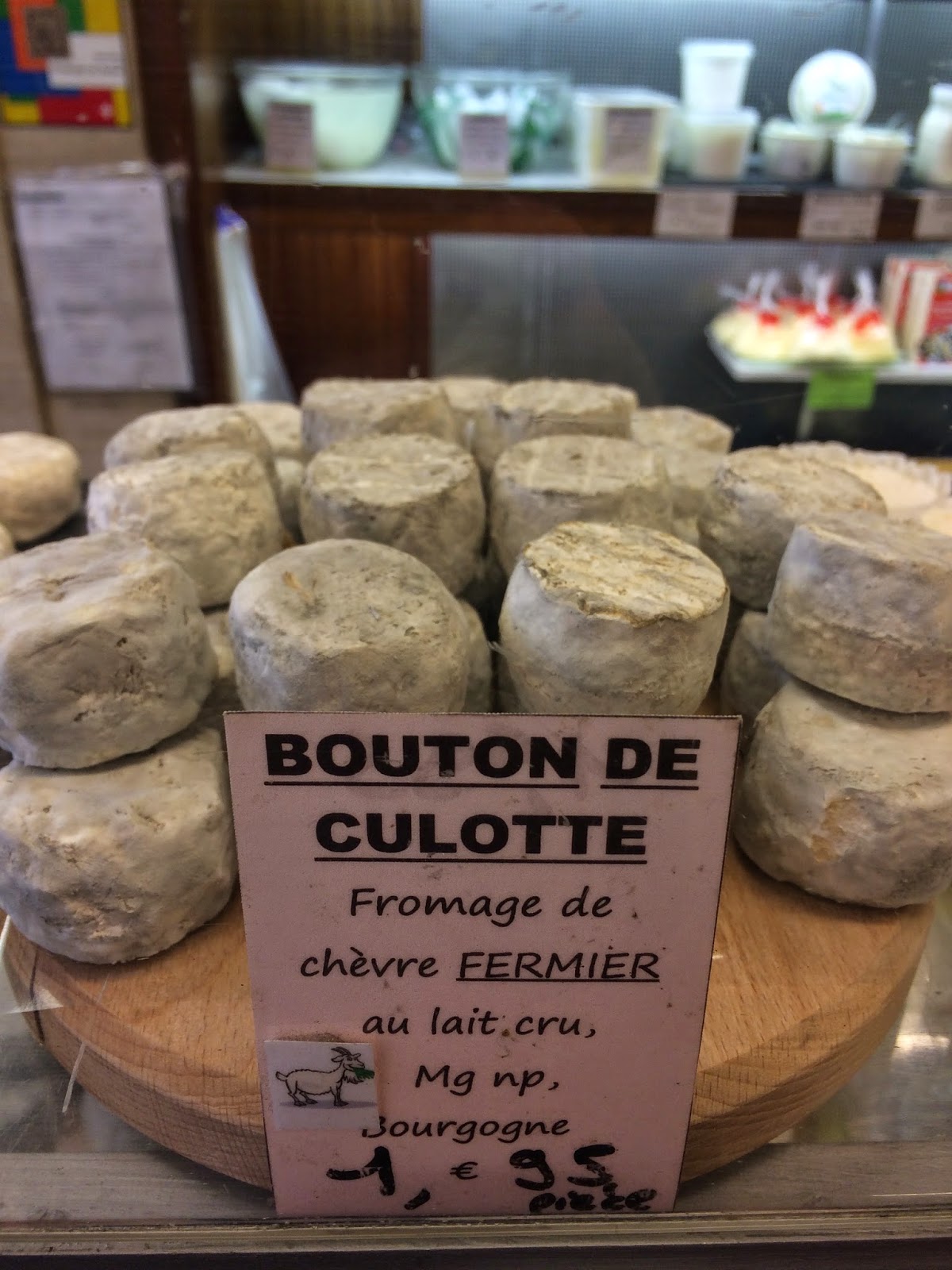 Some cheeses were covered in ash, and then on some of the ash was a thin layer of mold. Beneficial bacteria! I ate it and it was tres delicieux! The cheeses here are also made with raw milk, which is illegal in the U.S. (everything must be pasteurized) and the taste is much stronger and more complex for it. 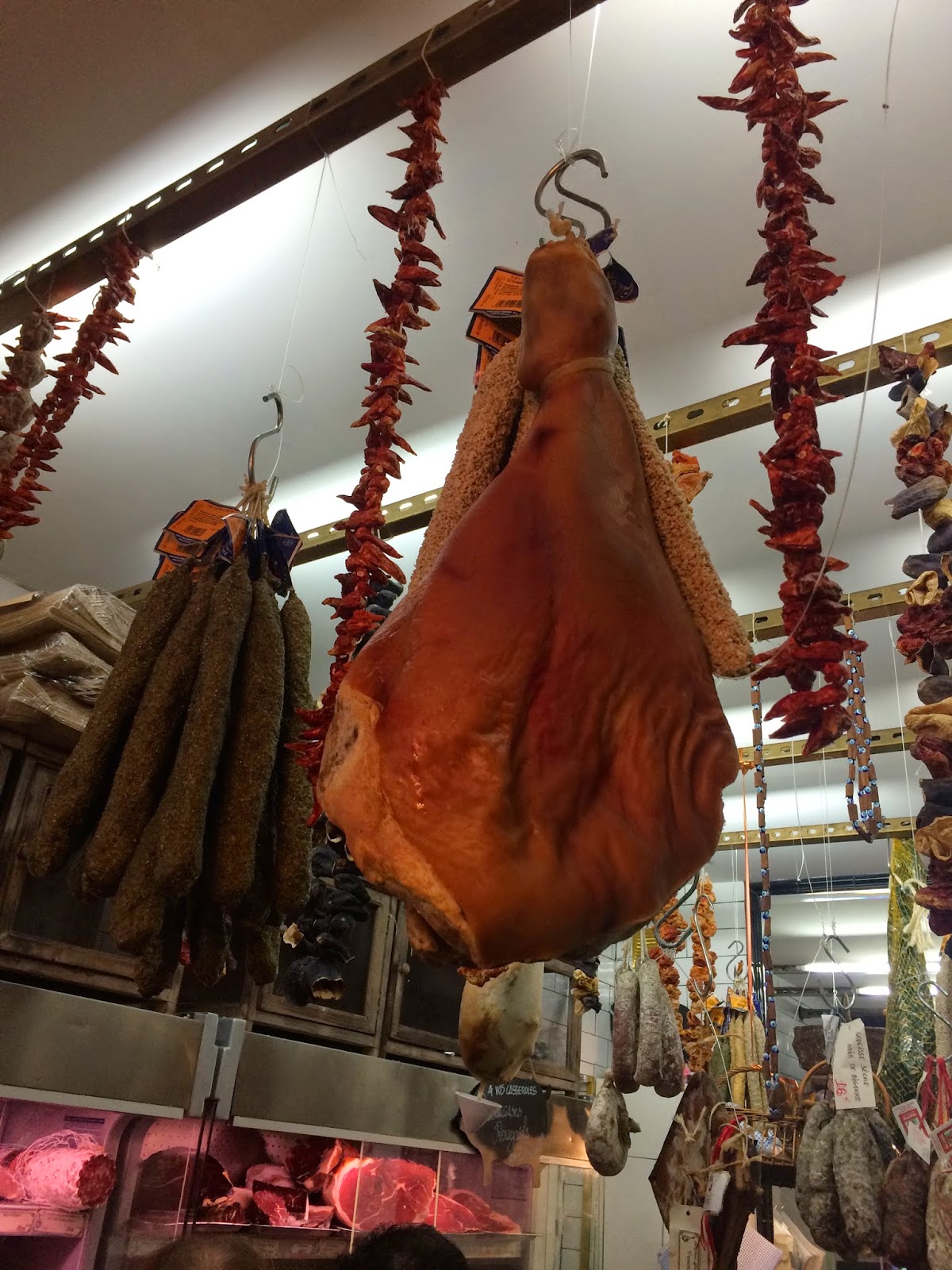 Oh mon Dieu! Next we are at a charcuterie operated by a man named Solo. (Probably I spell it wrong). He is so friendly and smiling. He doesn't speak English much but he knows our guide. She tells us that most charcuterie is from male pigs because, in the case of le cochon, pregnancy and childbirth has a negative effect on flavor. BUT! Someone runs a convent for virgin pigs. These virgin pigs, they taste quite lovely. Solo slices us generous portions. After the virgin, we eat a male who has been rubbed with wine and something else. It tastes sweet and salty. The fat melts in your mouth. Oh boy. 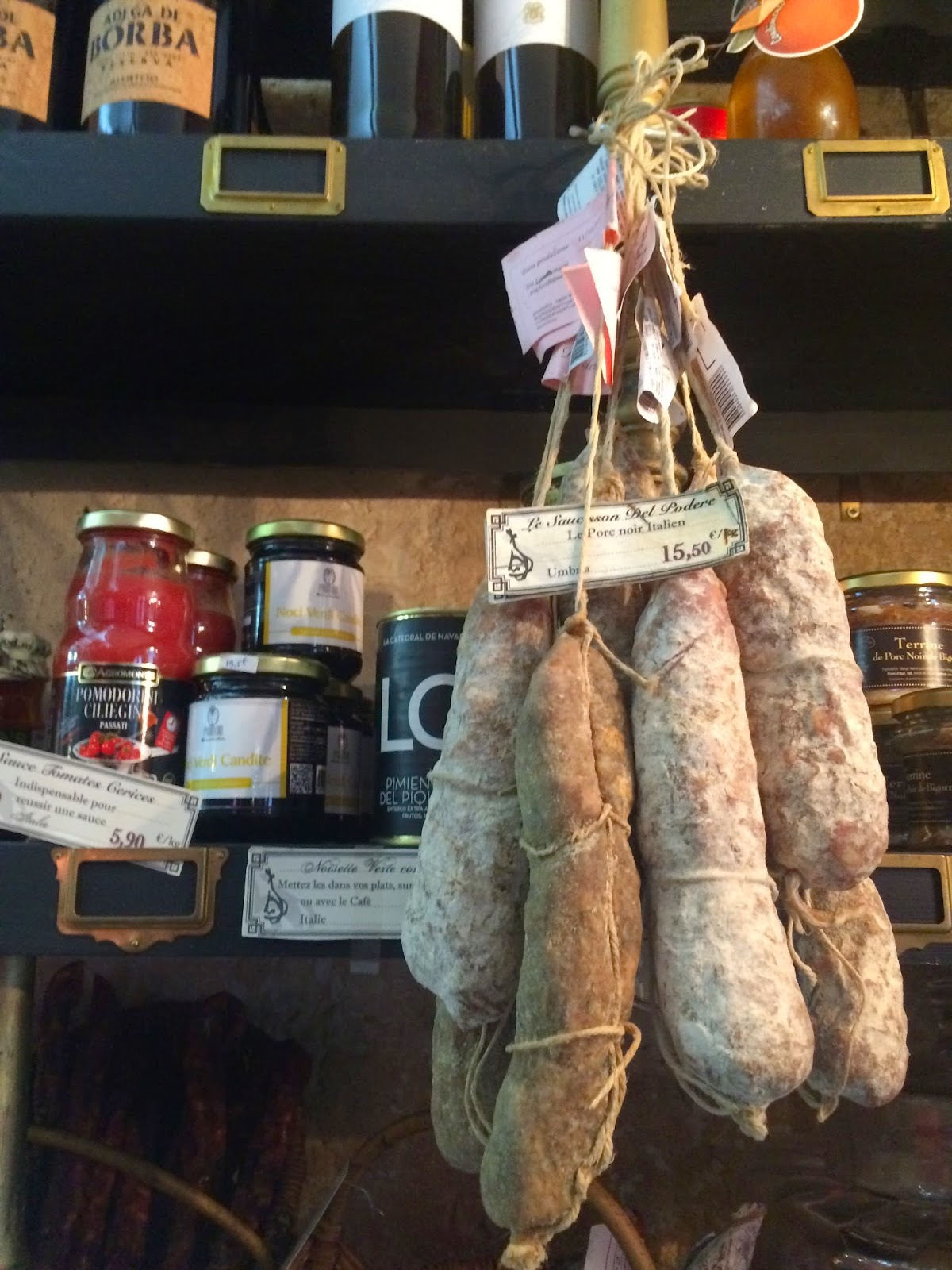 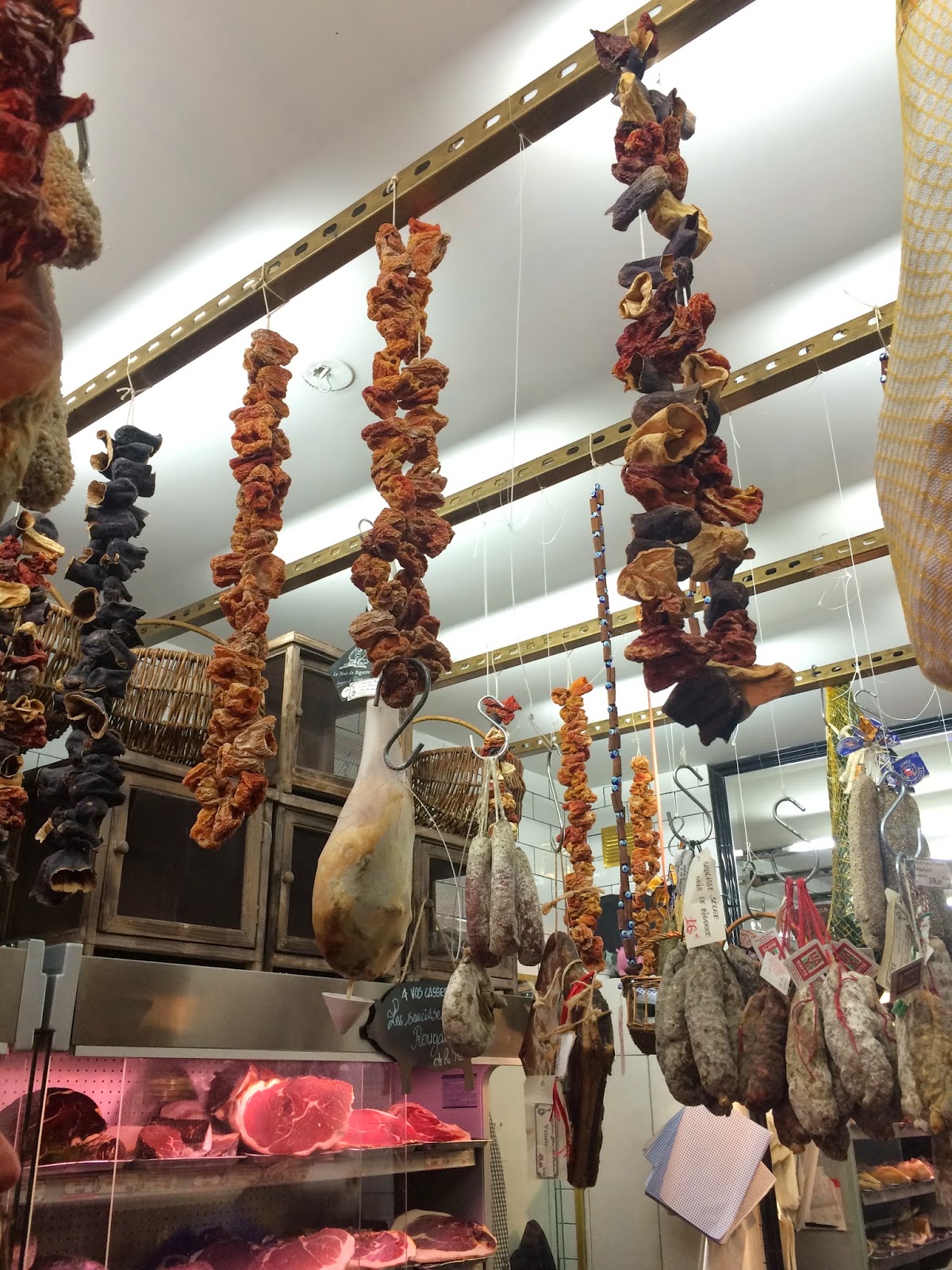 It's kind of dark but that is a hoof. 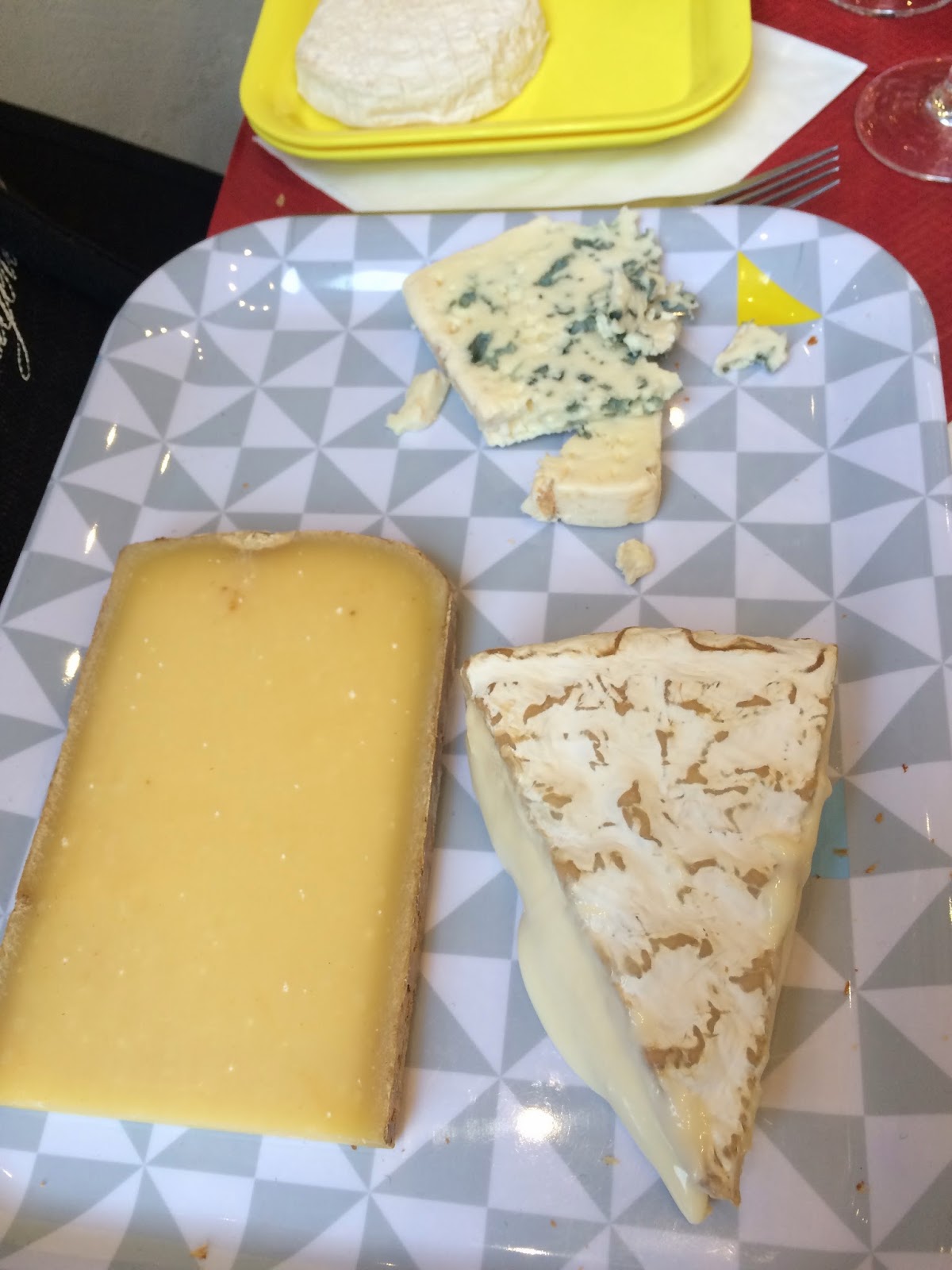 After guiding us through a smashing covered market that I could easily have missed on my own, and giving us some pointers on buying our own food from the market later, Catherine leads us to the grand finale, the wine bar! Catherine is from Boston but speaks to the owner in French, and he selects two whites to pair with the cheese, and two reds for the meats. Now I can not usually drink white wine, but these were delicious. Not too sweet, not that weird sort of syrupy alcholy taste I usually get in whites I select at home. I'm sure good whites are available at home, I just don't know them. #notallwines

Pictured above on the left is a Comte, apparently the most popular cheese in France. This one 30 months old. The brie was some special kind--melun!--that's where it's from. So Melun, probably. It was so runny and creamy and wonderful. It was what cheese is in your wildest dreams. 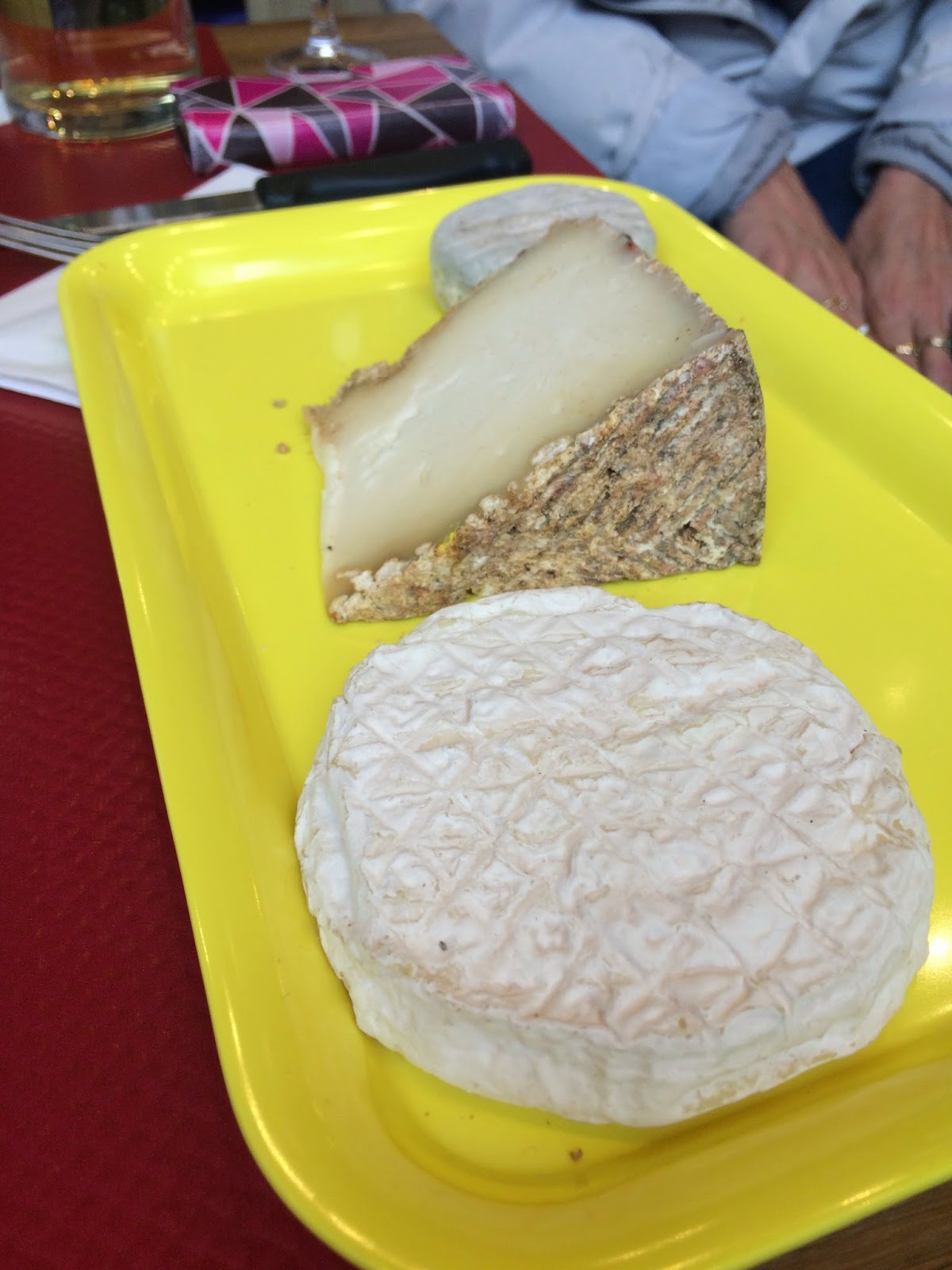 The round is a goat cheese from the Loire valley, 7 days old. It was so good. The round one on the far side is that chevre with ash and mold. Delicious, I tell you! Catherine asked at the fromagerie what was good today, and they were excited to tell her about the middle cheese, Tome de Chevre, one year old. Happy first birthday delicious little cheese. 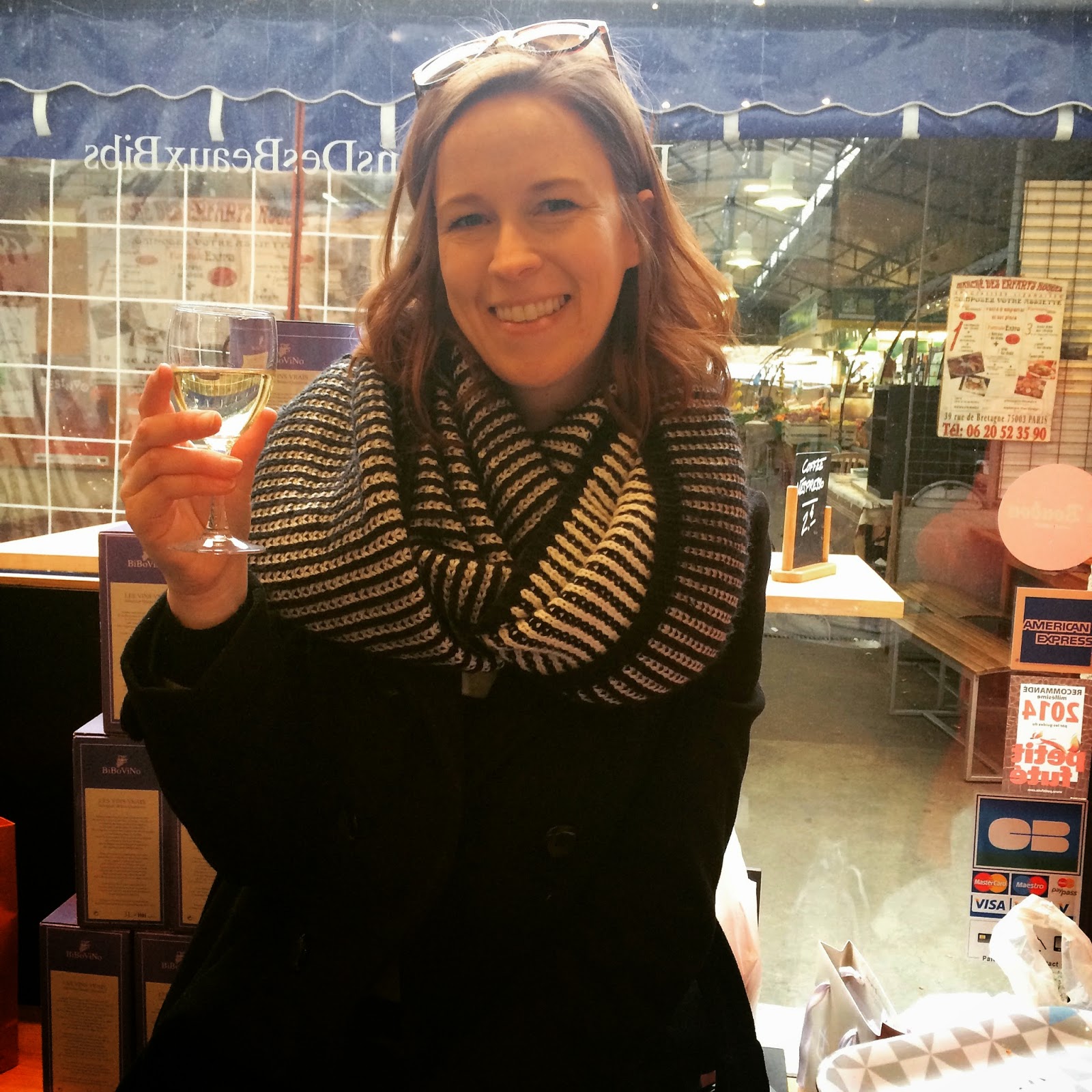 On the tour with me were an Australian couple and four gorgeous Brazilians, go figure. The Brazilians didn't speak much English, but the Australian couple was friendly as per their reputation, and the woman took this picture of me. "Thank you," I said. "My mom will be happy." All the food was included in the price of the tour, and even though we started at 3:30, we ate the majority of the food around 6pm, so hello, dinner! It was an absolutely lovely time and I'm so glad I did it.