March Must Haves: Let's Talk About Wellbutrin With Owl! 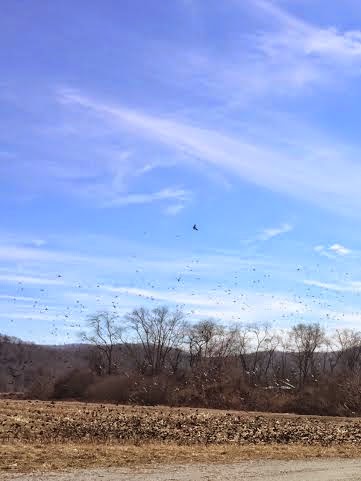 Back in January when I said I was going to get on Wellbutrin, I meant it. But I never actually followed through. I don't know, and can't explain, why it's such a struggle to do something I know is good for me, except, you know, everyone does that. So much of the time we don't do what we know is good for us, and instead we do stupid things like try to be lifestyle bloggers. I thought I was doing okay in the brainpan because I wasn't hitting the really bad places. I was taking a shower every day, almost. Then we had this gorgeous sunny day after two weeks of miserable weather. I put on a song from my Paris playlist, a bouncy happy song that even has birds chirping in the intro, and drove down the street under the blue sky thinking that soon I would be in Paris. And I felt nothing. I didn't feel happy or excited. And then I realized it had been months since I had felt anything like happiness or excitement. I thought about how, in the weeks leading up to Paris, when realization hit me that I was actually going to be there, I would start to cry. So many times I had burst into tears as the thought would hit me that it was really, truly happening. This seemed not too out-of-the-ordinary for me, as this trip is the realization of a dream I've had for about 13 years. It's something I wanted that I had begun to doubt would ever happen. After a year of some major disappointments in the how I thought my life would go department, Paris was one thing that was happening for me. Of course I would feel emotional about that.

But it occurred to me that there should be some happiness mixed in as well. Not just, I'm so overwhelmed that I'm going to Paris I'm going to sit here and cry about it. And it occurred to me that it would be a waste of a very major trip to show up in Paris without access to my feel-good chemicals. Because that's where I had been since October. The feel-good chemicals all locked away in my brain behind a door to which I had no key.

Now Let's Talk About the Affordable Care Act With Squirrel. The wrinkles aren't all ironed out, you know. It's a new system. I get it. I fall into this weird place where the ACA thinks I have access to free health care because my husband has free health care. Long story short, I still don't have health insurance. So I called the discount clinic. They couldn't get me in until March 11th at 3:30, which is exactly when I plan to be checking in for a flight out of Charlotte. I got kinda panicky and Noah called around for me until he got me in to a place. I went to the place today. I spent 15 minutes with a physician's assistant answering questions about my health and family history, and then about 5 minutes tops with a doctor. I am so grateful the doctor didn't hesitate to put me back on Wellbutrin, as I'm always nervous the doctor is going to give me a hard time. The cost of the visit was $126. I think it's worth mentioning that that's how much it costs to spend 20 minutes talking about yourself in the hopes of getting access to the feel-good chemicals in your brain. I'm not complaining, I'm lucky we can afford it. They let us break it up it into payments, even. Though at this point I had decided I'd pay it out of my trip budget if I needed to. Then I went to get the script filled at Ingles. I hate Ingles. They wanted $117 for 30 pills. So I called the independent pharmacy in town. They wanted $26. Ingles had agreed to price match, but at that point it just seemed wrong to give my money to a corporation instead of the family-run pharmacy. Hooray for that! Whatever. The only reason I'm going into such detail is that if someone else out there is depressed and uninsured, I want them to have an idea of what it took to get help.

So here they are. My March Must Haves! For stylish but depressive moms on the go! Because lifestyle blogger now, remember? I live such a lifestyle. I don't even know. 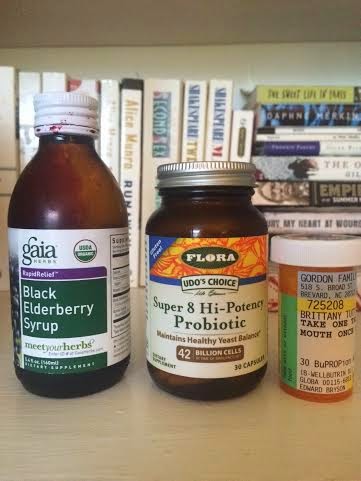 I started taking the Elderberry syrup when I had that horrible two-month cough going around, but it didn't do anything for me and now I don't believe in anything anymore. Except for access to prescription drugs. I'm taking the probiotic because for months my stomach had been upset every single day, especially after coffee, and the probiotics made that all better from the first pill I popped.

Bupropion (I actually take the generic) hits me like a charm. Twenty minutes after I took one, I had a giggling fit. For no reason I laughed and laughed. That might make it sound like Bupropion made me crazy instead of better, but I think it was my body finally feeling a giddiness about all this, one that had been tampered down for months. It hit me this way last year too. One tweaky day and then smooth-sailing. Now, a few hours later, I'm all evened out.

I still want to be a lifestyle blogger, though. :-/

Posted by Vesuvius At Home at 3:30 PM